OPINION: The lack of justice for Breonna Taylor is the reality for Black women in America

Taylor was killed by police March 13 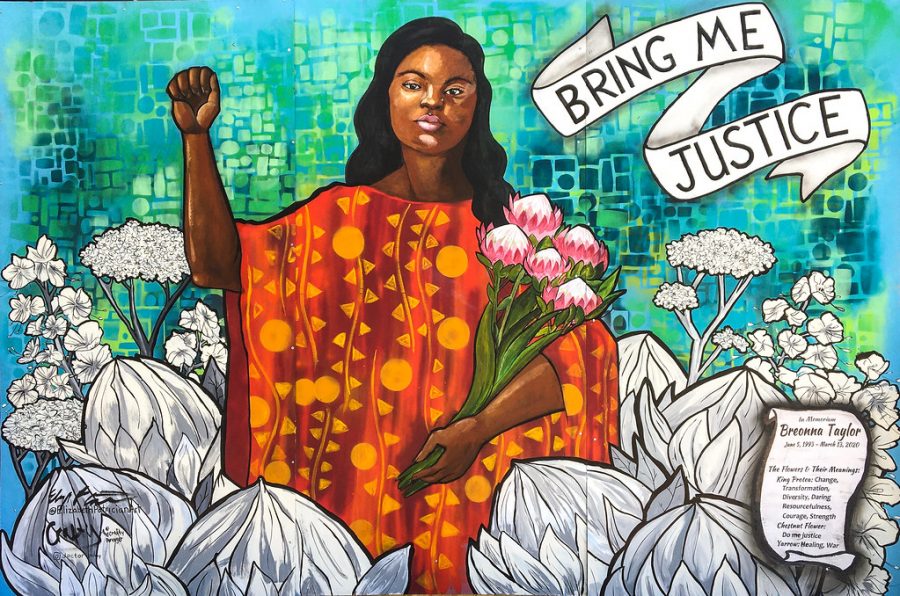 "Breonna Taylor" by Annette Bernhardt is licensed under CC BY-SA 2.0

Breonna Taylor was an innocent Black woman who was slain mercilessly in her apartment after being awoken by people banging on her door who ultimately broke in and began shooting wildly at her and her boyfriend.

For this kind of crime, you’d expect that the shooter would receive life in prison. However, in this case the murderer was a cop. Taylor joins the list of Black women who had their lives cut short by police brutality. Before Taylor, it was Kathryn Johnston, Korryn Gaines, Atatiana Jefferson, Tanisha Anderson, and so many more.

Walker maintains he didn’t know who was coming into the apartment, so he fired a shot at the officers. From there, it was fire at will as the officers fired several rounds into Taylor while she was unarmed in the hallway of her home, and didn’t even try to medically treat her as she took her final breaths. You’d think that in a just America these officers would be rotting in prison.

Not only did they murder her, they also showed careleness for the whole situation to begin with. To start, the no-knock warrant used was obtained illegally by the police department. In the U.S., the issuance of no-knock warrants is based on the suspicion that if the police announce themselves it will give the suspects a chance to destroy evidence or that the suspects are a threat to the law enforcement on the scene, but neither could be said here.

It is also standard procedure that EMTs are on standby at the scene of a no-knock warrant in order to provide assistance if needed, but as you know they left Taylor to die on the ground in her hallway. These officers clearly lacked an attention to detail because they handled this as bad as anyone ever could.

Some may look at the news and see this as a unique case, but for Black people like me, this is the usual, and it’s sad I even have to say this.

The stats speak for themselves. Since 2015, 48 Black women have been killed by police. Out of those 48 incidents, there have been only two times where the officer or officers were charged. Make that make sense to me, because it doesn’t.

Kentucky Attorney General Daniel Cameron, who is responsible for levying charges against the three officers, has spent over six months twiddling his thumbs while the killers remain on the streets. This past week, Officer Hankison was indicted on three charges of wanton endangerment for firing three shots into the apartment next to Taylor’s.

In the state of Kentucky, a person is guilty of wanton endangerment in the first degree “when, under circumstances manifesting extreme indifference to the value of human life, he wantonly engages in conduct which creates a substantial danger of death or serious physical injury to another person.”

In America, it is a serious statement to claim that someone is racist. However, when looking at the facts of the Breonna Taylor case, I find it impossible to justify her death. If she wasn’t killed out of racist intentions, why was she killed?

Taylor posed no threat to the officers, yet the firing continued until she was slaughtered like an animal. Would a white person have been treated the same way? I doubt it.

“To not indict the officers for murder is to claim #BreonnaTaylor killed herself. Racist America constantly kills Black people and then tells Black people we killed ourselves,” said Dr. Ibram X. Kendi in a tweet following last week’s ruling.

Meanwhile, the other two officers received nothing, not even a slap on the wrist. Today they still remain on the force like nothing ever happened, while Breonna Taylor’s body rests under six feet of dirt.

I am angry. I’m both angry as a Black man and as a Black man that has two younger Black sisters. What if this had happened to them? Would they get justice? The sad reality is that what happened to Breonna Taylor could happen to them too.

When they kill you and tell the world that the killing was a faultless, non-criminal and justifiable. And they tack on “tragic” so that they don’t sound so much like monsters as they are. #BreonnaTaylor

It was also revealed that Cameron never recommended manslaughter or murder charges in the Taylor case because apparently he couldn’t prove it beyond a reasonable doubt. However, Cameron also tries to claim that there wasn’t a no-knock warrant because police announced themselves, but only one out of the ten neighbors interviewed said they heard the announcement raising further questions about the accuracy of Cameron’s statement.

A big part of this case is the assertion that Taylor and her boyfriend, Kenneth Walker, were fired upon by police because Walker had hit Mattingly with a shot to his femoral artery. However, a Kentucky State Police ballistics report does not verify that claim. Walker continues to maintain that he fired a warning shot when the police were barging in.

The report said, “due to limited markings of comparative value,” the 9-mm bullet that hit and exited Mattingly was neither “identified nor eliminated as having been fired” from Walker’s gun. So if they can’t confirm that there was a justifiable reason to open fire on two innocent Black people, why did they shoot?

I’ll tell you why, because it was a murder committed out of hate. The no-knock warrant Louisville police obtained to enter the apartment was because they were suspicious that Taylor was previously involved with a suspect in a drug case. However, neither Taylor or Walker had a criminal record. There were no drugs found at the apartment. Yet, Breonna was shot at least six times.

It has now been over 200 days since Breonna Taylor was killed and it is clear that she is just another Black person that the system overlooked and failed. People want to tell us how to protest, where to protest, and why to protest, but since it’s clear that America won’t grant the same equality to us because we have dark skin, it is important that the push for justice continues. No justice, no peace.