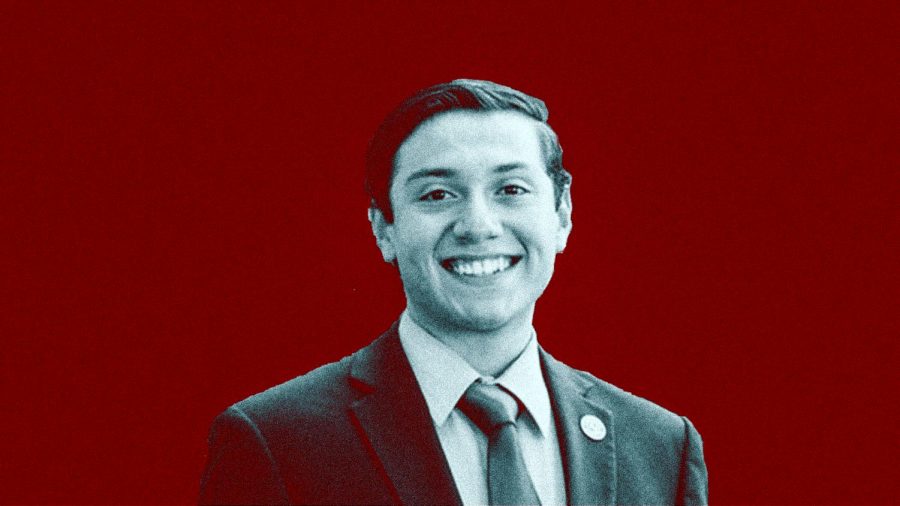 Former ASI president Christian Landaverde said the COVID-19 campus closure at the end of his presidency shifted his focus towards his other career goals. Landaverde said he stepped down to study for his law school admissions test and spend time working on the Sacramento County Alcohol and Drug Advisory Board. Photo by Tanner Landon. Photo Illustration by Rahul Lal.

At Sacramento State, Associated Students, Inc. elections are held every April to elect new members of the ASI Board of Directors, which includes one member from each college as well as various vice president positions and the ASI president.

When students choose to vote for you, they are trusting you to faithfully serve and carry out the very promises you made to them during the campaigning process. In 2019, Christian Landaverde and Jen Gross were elected president and executive vice president after receiving 972 votes in the ASI election.

However, this past March, Landaverde and Gross resigned from their posts citing personal reasons and were still allowed to keep the scholarship money they received. This week, Landaverde told The State Hornet he resigned because he was in the “lame duck months” of his presidency and he knew that the campus would be closing due to COVID-19. It doesn’t seem right for someone to get 100% compensation for roughly 75% of the work but I guess that’s the way it played out in this situation.

However, Landaverde said he knew at least two weeks in advance the direction that the campus was going regarding COVID-19 and he never said a word to the students, even though he was supposed to represent us and our well-being. We were blindsided by the fact that we all had to basically go home, something that he could’ve prepared us for which would’ve allowed us to make a smoother transition to distance learning. Instead, he sat on that information and used it for his own benefit.

I think the best part of his explanation was when he said that he needed to study for his LSAT. It’s as if he didn’t know before he got elected that he needed to take the LSAT the following year and that could’ve allowed him to rethink his presidential run. Regardless, money talks for some people.

Let me be clear: for a student to resign in the middle of their term with these bogus reasons is absolutely shameful and I suggest Landaverde look himself in the mirror and re-evaluate.

Not only did Landaverde and Gross get to walk away without consequences, they got to keep all of the combined $35,625 in scholarship money they received as an incentive of being part of the ASI student government, including their last payments for around the amount of $4,795.75 for Landaverde and $4,110.50 for Gross on Feb. 20, 2020 just weeks before their resignations.

Although what Landaverde did was wrong, he at least had the guts to speak up and admit he felt like there was nothing left for him to do. But Gross still has yet to speak out and own up to her decision. It’s a slap in the face that we couldn’t even get an explanation out of her, but that just goes to show that she knows her decision wasn’t made in the best interests of the students.

As a student who struggles with paying for college tuition and rent, I condemn Landaverde for basically quitting a job and still getting paid. When you quit your job anywhere else, they don’t continue to pay you, so why should Landaverde receive special treatment for giving up on the students and campus he swore to represent through thick and thin?

The fault not only lies on Landaverde, but it also lies on ASI executives for allowing this to happen. Student government members are supposed to help teach people how to be role models, but by allowing this to happen, they are demonstrating to the campus community that you can quit your position without repercussions.

In real life, when a president is in the “lame duck” months of their presidency, they don’t just resign because it suits them best. They continue to serve with honor until the next president is sworn in.

The ASI president is possibly the most powerful student on Sac State’s campus, and the position is meant for a student who will do whatever it takes to make the campus experience better for their fellow students. This isn’t a matter of convenience, this is a matter of moral responsibility.

Landaverde’s sudden resignation particularly rubbed me the wrong way because the announcement was put out on the ASI website and nothing was said about it ever again. It almost felt as if ASI was trying to sweep this situation under the rug.

When I cast my vote in an ASI election, I trust that those leaders will remain in their positions for the entire year, I expect that they will serve their students through thick and thin.

The past year has been a rough year for Sac State, especially for students, and I think all of us expected our student-elected officials to lead us through the beginning of the pandemic with a solid plan. This felt like a gut punch.

The fact that Landaverde dated his resignation for March 13 is frustrating in that he didn’t even attempt to assist students in any way. Instead, he wanted to go study for his LSAT, which isn’t a crime, but that was the most important moment of his presidency and he chose to run away from it instead of being the leader I thought he was.

Landaverde recently told The State Hornet, “I’d like to be a congressman, but it depends where life takes me.” That career might be right up his alley, because he seems like the type of person who will make all of the promises in the world to get the votes, and then get into office and instantly flip the script to his me-first agenda. Good luck, Christian.