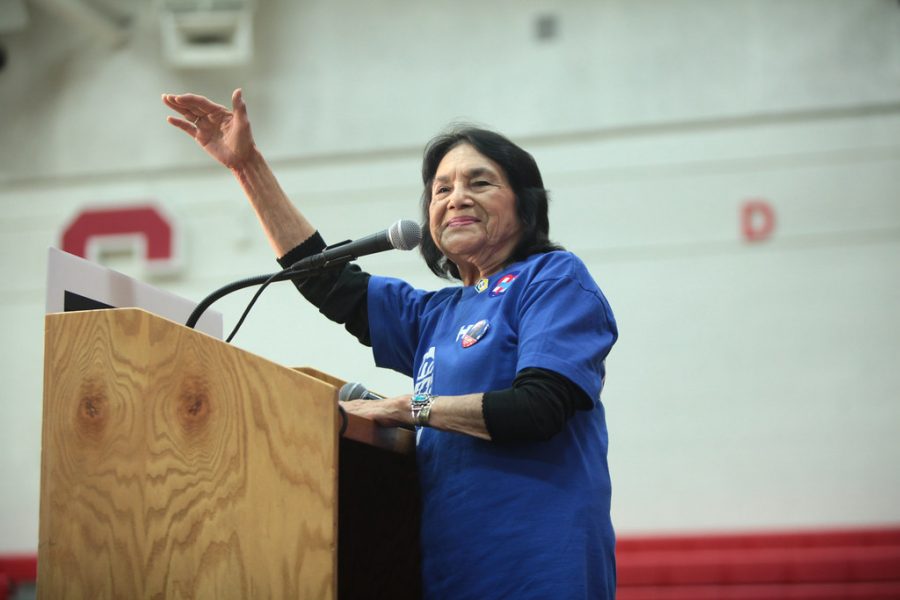 The 90-year-old icon and activist is known for her leadership in the farm labor movement and her advocacy for the working poor, women’s rights and civic action.

“I love what I do,” Huerta said. “I love organizing people speaking truth to power. This is why I’m still doing it at the age of 90.”

“Join the movement! We are in a critical moment right now when we are making history.” @DoloresHuerta @sacstateserna @TheStateHornet pic.twitter.com/uOStJp479x

“Coming from an agricultural family, I really understand where she is coming from!” Martinez said via Instagram direct message. “Thanks to her, thousands of farm workers were able to work in manageable work environments. Thanks to Señora Huerta, many people are getting the equality they deserve.”

Huerta was originally scheduled to speak in March, but the event was postponed due to COVID-19.

RELATED: Sac State cancels all in-person meetings, events amid coronavirus concerns
On voting
With the general election weeks away, Huerta said the futures of people in the undocumented community, who have contributed so much to society and programs like Social Security, are in voters’ hands.

[email protected] answers a few more questions on topics like the legal fight for undocumented persons and DREAMERS, how she holds on to hope and how young people can become politically engaged. Huerta said voting and urging others to do so is key. pic.twitter.com/MM5m8XRHvs

“We have obligations, and we have to take these seriously,” Huerta said, referencing voting and participating in the census.

The people seek in administration, policy and practices also relies on who votes, Huerta said.

“This is the time for us to get even by getting everybody to vote,” Huerta said. “This is a time when we can make that happen.”

Huerta urged students to vote and to mobilize others to vote throughout her speech.

“Let’s do it,” Huerta said. “Let’s get out there. Let’s educate, let’s organize, let’s mobilize. Let’s vote.”
On the national census
The national census occurs every 10 years, and is used to appoint seats in the U.S. House of Representatives, Huerta said. The census distributes federal funds to communities and provides critical data that helps determine daily services needed in communities, she added.

“If we’re not counted, we lose representation in the Congress of the United States of America,” Huerta said, particularly about Latino voters. “We’re going to lose the votes that we need to get immigration reform.”

Huerta assured everyone that there is no citizenship question on the census and that it is confidential.

“[Trump] has been trying to scare our community into not participating in the census,” Huerta said. “They are doing it because they don’t want us to have representation.”
On anti-racism
Huerta addressed many groups in her speech and said that despite the different labels we ascribe to, we are all one human race.

Homo sapiens vary in hair, skin and eye color, but are still Homo sapiens that descended from Africa, Huerta said.

Martinez said she was caught off guard by this.

“I never heard that before,” Martinez said. “It was a little surprising to hear that we all descended from Africa.”

“We have to say to all those people, the neo-Nazis, the Proud Boys, the KKK, all of you white supremacists: just get over it,” Huerta said. “You are all Africans.”

Huerta said that not being racist is not enough, and only through active anti-racism can we eradicate the hate that has been perpetuated by certain groups.

“We know that children are not born to be racist, they get this from the cultures, and from their families,” Huerta said. “This is something that we know that we can actually change.”

Huerta spoke about the importance of supporting social movements that work to end police brutality like Black Lives Matter.

Huerta said police are growing in numbers and in violent tactics that must be stopped through demonstrations, movements and most importantly, through voting.

According to the Bureau of Labor Statistics, “Employment of police and detectives is projected to grow 5 percent from 2019 to 2029, faster than the average for all occupations.”

“Who better to really speak on all of these topics?” Mora said. “We wanted to have a speaker who could encompass a mindset and a focus and a willingness to kind of include everyone from all different parts of life and different populations.”

Attendee Pedro Valencia is not a Sac State student, but found out about the event through Sac State’s Twitter account.

“It really stood out to me when Dolores described how some of her friends and family thought it was crazy that she was involving herself in civil disobedience and protests,” Valencia wrote via Twitter direct message. “She said we shouldn’t be afraid or let it discourage us if not everyone understands our activism, or even laughs at us for it.”

The Serna Center helps to advance leadership and communication skills, civic engagement, empowerment, self-advocacy and mentorship connections for Chicanx, Latinx and other underrepresented students at Sac State, according to its website.