REVIEW: 10 Songs for your Halloween playlist that aren’t ‘Monster Mash’

These alternative songs will put you in the spooky spirit 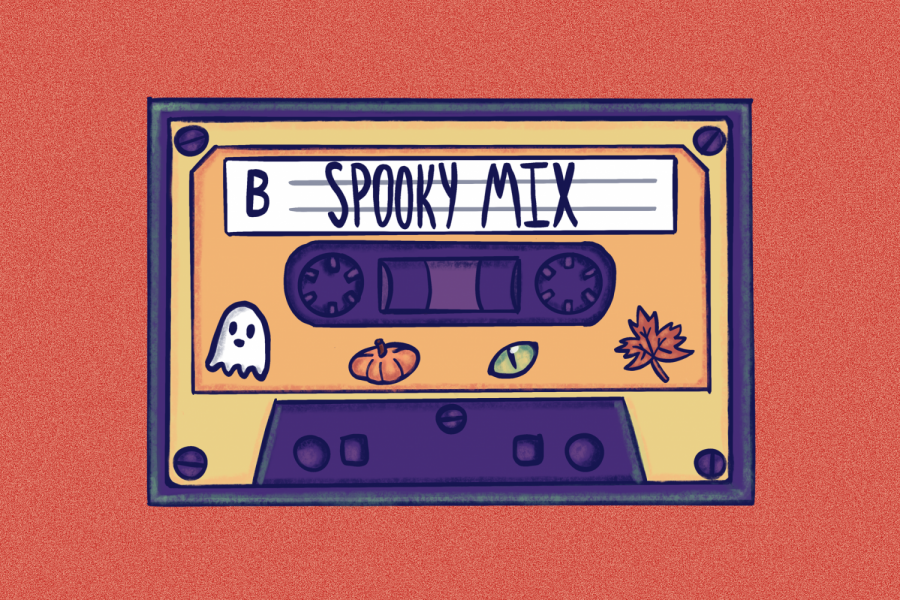 As much as I enjoy classic Halloween songs, if I hear “Monster Mash” or “Spooky Scary Skeletons” one more time, I’m going to monster mash my head into a wall.

I started curating my own Halloween playlist on Spotify in September (because that’s when Halloween starts for me), and I thought I’d share some of my top spooky songs to give you a break from the overplayed ones.
1. “Cat’s Eyes and Rosebuds” by So Much Light

When I saw the Sacramento-based artist So Much Light perform this song at Ace of Spades, he described it as both spooky and sexy, which summarizes the piece perfectly. After the sound of a grainy tape recording in the beginning, low sultry notes join eerie high-pitched sounds to give “Cat’s Eyes and Rosebuds” a funky Halloween beat. The artist just released a new Halloween song this month, but “Cat’s Eyes and Rosebuds” is still my favorite.
2. “Dracula Teeth” by The Last Shadow Puppets

The Last Shadow Puppets, composed of Miles Kane and Arctic Monkeys frontrunner Alex Turner, use classical string instruments alongside rock instruments like bass guitar in “Dracula Teeth” to create a mesmerizing song with spooky imagery. Lyrics like “you’re hovering above my bed looking down on me” sung by Turner’s low voice give the song a haunting feel. We can put aside that I’ve also had a crush on Alex Turner since 2014.
3. “Little Dark Age” by MGMT

This one might not be classified as a Halloween song, but it gives me Halloween vibes for sure. Although released in 2017, this song feels like an ‘80s goth hit with its dark synth and lyrics that echo. It sounds far away and ominous, like it’s reaching from another dimension or coming to me in a fever dream. Not to mention “Little Dark Age” recently became a popular sound on Tik Tok.
4. “My Girlfriend is a Witch” by October Country

I can’t believe I only recently found out about this groovy 1968 song that sounds like it’s straight from an old “Scooby Doo” episode. Just the concept of a song about your girlfriend being a witch is rad, and the fast guitar makes me want to dance in a pair of bell bottom pants. On the YouTube video for the song, a user commented, “I thought this was by an indie band from nowadays with a 60’s aesthetic,” and I’ll admit I thought the same thing.
5. “Dead Man’s Party” by Oingo Boingo

Y’all, Danny Elfman, the frontrunner for ‘80s band Oingo Boingo, was the blueprint for spooky music. There’s nothing more fun than a song with some catchy guitar and trumpet about attending a party where you can “leave your body and soul at the door.” After Oingo Boingo, Elfman went on to compose music for countless films, including “Edward Scissorhands” and “Beetlejuice.”
6. “Witch” by The Bird and the Bee

This song makes me feel like I’m being lured in by a beautiful witch who is casting a spell on me, like a siren is calling me to rocky shores. Inara George’s alluring voice is the focus of this song, paired with subtle music that sounds like it’s from a “James Bond” film. Beyond her charm, danger lurks as she sings, “and all my tricks and all my magic will keep you dizzy with desire.”
7. “The Killing Moon” by Echo and the Bunnymen

This is another one of those songs that isn’t technically for Halloween, but the mood just fits. This 1984 song is dark and brooding with its steady guitar and Ian McCulloch’s haunting singing voice. It seems to deliver a wider message about living and dying, with its lyrics, “fate up against your will, through the thick and thin, he will wait until you give yourself to him.” The song might be scary in the sense that it triggers an existential crisis.
8. “Boogieman” by Childish Gambino

Childish Gambino is brilliant for combining the idea of the classic ‘boogeyman’ creature who scares children with the boogie genre of music derived from Black American communities. Everything about this song is so funky and psychedelic, but creepy at the same time. A chorus behind Gambino’s voice sings a catchy tune and screams, while a maniacal laugh sometimes sounds.
9. “Burn the Witch” by Queens of the Stone Age

This song by the alternative rock group Queens of the Stone Age plays on the idea of the mass hysteria that occurred during the Salem Witch Trials in the 1600s. I love this concept portrayed in the format of an edgier rock song. In the chorus Josh Homme sings, “bite your tongue, swear to keep your mouth shut, make up something, make up something good,” capturing the perspective of living during these trials.
10. “Evil Eye” by Franz Ferdinand

The band Franz Ferdinand always has this fun and energetic sound to it, and this song is no different. I can imagine dancing to the catchy guitar and lyrics at a Halloween party in a last-minute vampire costume. This song plays on the idea of the bizarre and mysterious with the lyrics, “some people get a freak out of me, some people can’t see what I can see.”