Protesters and supporters demonstrate outside McClellan 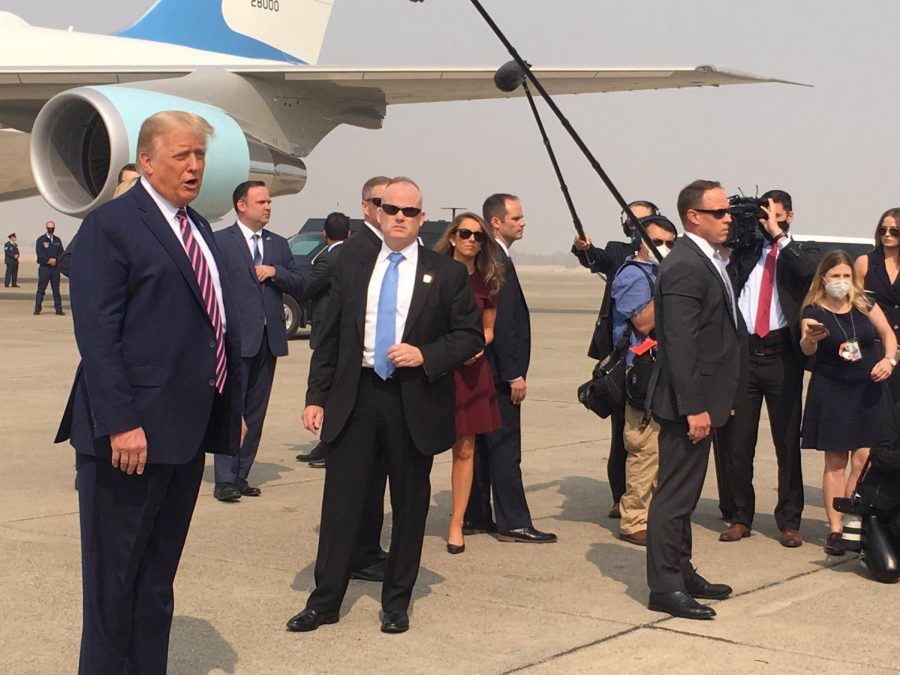 President Donald Trump addresses reporters about wildfires at McClellan Airport Monday, Sept. 14, 2020. Trump was visiting to meet with Gov. Gavin Newsom regarding the wildfires burning across the state and said that lack of proper forest management is a major contributing factor to the fires.

President Donald Trump visited Sacramento Monday for a briefing with state and federal fire and emergency officials on the wildfires.

The president landed at 10:53 a.m. at Sacramento McClellan Airport, where he answered some reporters’ questions about the wildfires.

“They manage their forests and they manage them brilliantly and they’ve been doing that for many years,” Trump said.

One reporter asked Trump why it took him three weeks to address the fires in California and asked if he cared about blue states.

Trump referred to the question as “nasty” and said “I got a call from the governor immediately, and I called him immediately. In fact, he returned my call and on that call, I declared it a national — an emergency.”

Trump declared a major disaster in California on Aug. 22. Three days after residents were forced to evacuate their homes in Solano County due to the LNU Lightning Complex fire.

After answering a few questions, the president’s motorcade took the president to the wildfires briefing where he met Gov. Gavin Newsom.

After the briefing, members of the California National Guard were honored for saving Californians trapped in the Creek Fire.

Not far from McClellan were pro-Trump rallies and anti-Trump protests. Supporters of the president chanted “Four more years,” and “All lives matter.”

Black Lives Matter protesters demonstrated a few blocks away, chanting “I don’t  know about you, but I’m here for a change.” KCRA reported at least two demonstrators were hit by cars.

California College Democrats and Sac State Democrats club also held protests outside the base during Trump’s visit to Sacramento.

Newsom did not welcome the president when Air Force One landed, but they met in the briefing. On Friday, Newsom said he had a 30-minute phone call with President Trump about the wildfires.

Trump came to Sacramento from Nevada, where he campaigned over the weekend and attended multiple rallies, one of which was indoors against Nevada’s COVID-19 guidelines.

Correction: A previous version of this article quoted President Trump saying “That is a bad question”  regarding a question about why it took him three weeks to acknowledge the fires in California and moving on to the next question. The question was why Trump took three weeks to address the wildfires and he said “Let me tell you something about your nasty question”  but did not say “That is a bad question.” Trump then answered the question saying “I got a call from the governor immediately, and I called him immediately. In fact, he returned my call and on that call, I declared it a national — an emergency.”