With season on hold, team focuses on charity work 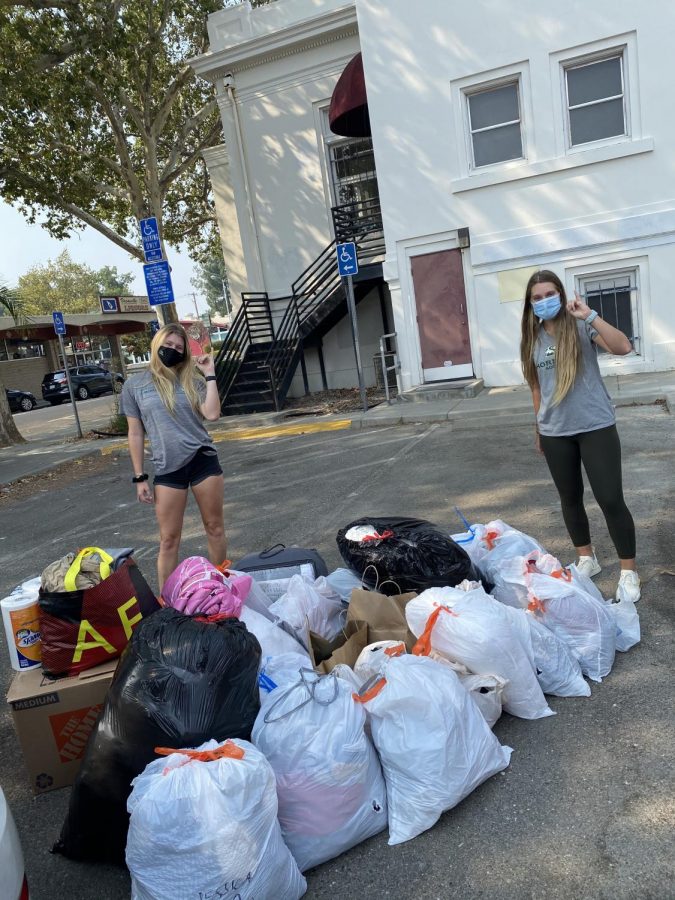 Sacramento State soccer players Shay Valenzano and Christina Lazar donating bags of clothes, shoes and toiletries on Thursday Aug. 27, 2020. The pair created a donation center for the Sac State women’s soccer team to help those affected by the fires.

The Sacramento State women’s soccer team donated clothes, shoes and about $200 worth of toiletries Aug. 27 to people affected by this summer’s California fires.

This year wildfires in California have burned more than 3.2 million acres, over 4000 structures and 19 people have died, according to Cal Fire.

Some of the counties closest to Sacramento affected by fires include Fresno, Yuba, Yolo, Trinity, Santa Clara and Alameda.

Senior midfielder Shay Valenzano was one of the girls who took part in the relief effort.

“I don’t know anyone personally affected by the fires, but we live close enough to be a part of their community,” Valenzano said. “When I heard about the fires I thought about my own family and what I would want others to do if I were affected by this.”

The idea came from Sac State women’s soccer alumnus Kaylyn Evans who is currently attending Concordia University Irvine for nursing. She heard about donation centers from a friend and decided to pitch the idea to her former team.

“I try to encourage and remind the team that they are more than just athletes,” Evans said. “Through things like volunteering, I’m always hopeful that they can grow as individuals and find new passions.”

Senior midfielder Christina Lazar took initiative and with Evans’ help, was able to set up a donation center for the team to help those in need.

“You just feel so helpless in times like these and all you can do is empathize and do everything you can to help these people,” Lazar said. “Not only did they lose their homes, but it’s also hard to get assistance right now with the pandemic.”

The soccer team still shows interest in helping communities affected by the fires despite the pandemic not allowing them to make plans for a season.

The team can only practice following proper health guidelines such as wearing masks, socially distancing, having their temperatures checked, sanitizing gear and being split into smaller groups, Lazar said. They also meet virtually discussing topics such as mental health, team culture, goals and diversity.

“Thankfully we are able to practice, but it’s not the same in any way,” Valenzano said. “The power of touch has been taken away from us, but we are still grinding until the day we get to play again.”