‘We are all shades of brown’: Elliott lectures on combating racism 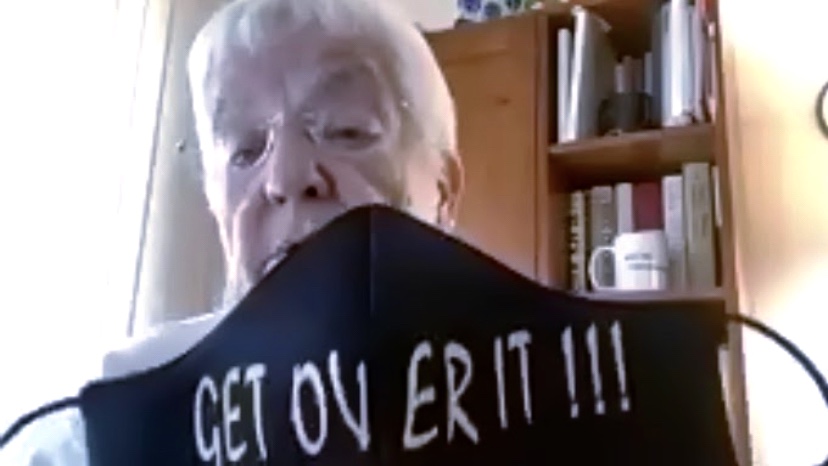 Jane Elliott displayed her "Get Over It!!!" mask as she discussed the anatomy of prejudice in a guest lecture hosted by Sacramento State's UNIQUE via Zoom Wednesday.

Elliott is known for her “Blue eyes/Brown eyes” exercise, which she administered on her elementary students the day after the assassination of Martin Luther King Jr. The exercise exposed the students to the concepts of inferiority and superiority based on the color of their eyes.

“One of the reasons they did such a good job was because I put them through the ‘Blue eyes/Brown eyes’ exercise,” Elliott said.

Elliott says the “Blue Eyes/Brown Eyes” exercise was designed to help a child to understand another child by walking a few hours in that child’s shoes. “You can’t teach the parents, you can teach the children,” Elliott adds. @TheStateHornet

While Elliott covered a range of issues in the presentation, one point she emphasized was that we are all part of one human race. Elliott said the concept of race was invented during the Spanish Inquisition to differentiate between Christians and Catholics.

Kalani Gaines, a sociology major at Sac State, initially expressed doubt over Elliott’s assertions that all humans are of one race because she thought “our different races were important.”

“I wanted to disagree until further in the lecture where I gained a better understanding of what she meant,” Gaines wrote in an email. “We are all the same race, being descendants of the same area and people; however, our cultures and colors are still valid from a perspective of historical experiences.”

Elliott expressed the importance of educating students and administrators to respect the rights of others and hold people responsible when they do not.

“It is psychological genocide in the school when you teach that one group is superior because of a skin color that doesn’t exist,” said Elliott.

Elliott added that the longer people stay in school, the longer they are reinforced in the lie of several different races.

Instead of instructing students on reading, writing and arithmetic, Elliott advocates for teaching “the three R’s of rights, respect and responsibility.” Elliott said the “Blue eyes/Brown eyes” exercise was designed to teach these “three R’s.”

We have to teach students to respect the rights of everyone else and we have to hold them responsible when they don’t. And we have to expect the same thing from their teachers and administrators and eventually we will get around to expecting it from their parents, says Elliott.

Elliott said, “The kinds of confrontations that you have between people of different color groups is the result of bad education.”

“I don’t know what it’s like to be a person of color in a classroom where racist remarks are allowed or where they are made by the instructor,” Elliott said.

Toward the end of the presentation, Elliott told the audience to “get over racism,” and stressed that no one is born racist.

“There is no gene for bigotry. Racism and all forms of bigotry are learned responses,” Elliot said. “You have to be taught to be a racist.”

Ashleigh Cook, a communications major who attended the lecture, described via email her experiences with racist individuals, and how these instances impacted her for years.

“Mrs. Elliott really enforced the fact that people who have a problem with the color of my skin are not my problem,” Cook wrote. “Like Mrs. Elliott said, ‘We’ve grown older, but we have not grown up. We have not grown up if we are still making racist statements.’ Racism is a choice we make. Period.”