OPINION: Defunding the police is the only option left 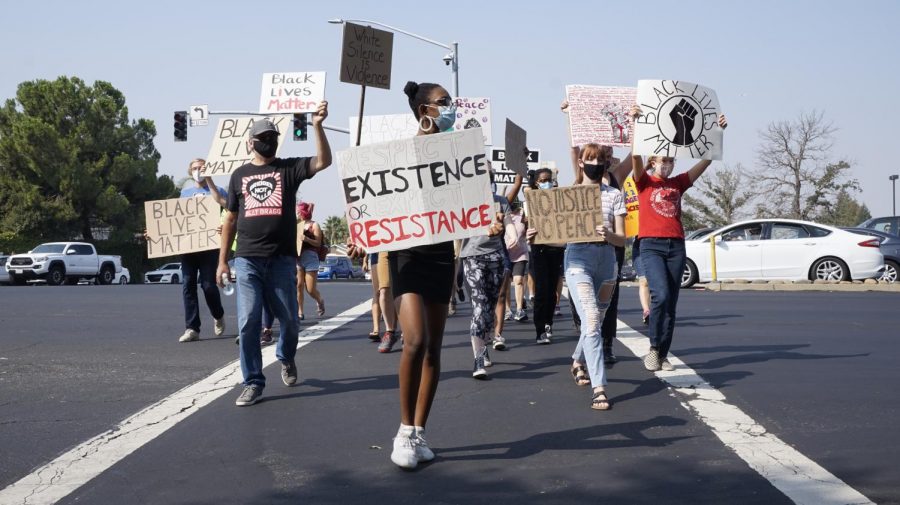 Three months ago, I wrote about the death of George Floyd after Officer Derek Chauvin murdered him in plain daylight. Not in my wildest dreams did I think that I’d be writing about yet another victim of police brutality so soon.

On Aug. 23 in Kenosha, Wisconsin, Jacob Blake went to settle a dispute among a group of women, when Officer Rusten Sheskey arrived on the scene. When Blake avoided the officer, Sheskey grabbed him by the shirt and fired seven rounds into his back, paralyzing Blake.

There’s a lot of controversy about what happened to Blake because of the pending third degree sexual assault, misdemeanor trespass and disorderly charges against him. However, what happened to Blake didn’t have anything to do with those charges because the officer wasn’t there to act on the warrant for his arrest. This officer acted with racist intentions and faced no consequence.

Blake didn’t deserve to be shot seven times in the back no matter what the circumstances were of the cops showing up.

For decades, we’ve counted on police officers to “protect and serve,” but they’ve never lived up to that motto. Instead, police officers across the country continue to abuse and murder members of the Black community with no remorse and no repercussions. This is why police forces across the nation must be defunded.

Wow. This Black man was shot several times in the back by @KenoshaPolice today. He was getting into his car after apparently breaking up a fight between two women. He’s in critical condition now. We demand JUSTICE! #BlackLivesMatter pic.twitter.com/I1reDEp4nw

Before you say defunding the police is a radical idea, examine why you think that way. There is clearly a disparity between how officers treat Black people and how they treat white people. Officers will shoot a Black person they see without cause, but when someone like 17-year-old white supremacist Kyle Rittenhouse murders two people at a Kenosha protest, he is defended with “we all do stupid things at 17.”

Unless my mind deceives me, I don’t remember committing murder being just a stupid thing all teenagers do.

Rittenhouse actually got to go home and sleep in his bed that night. Why? Because some police will ignore the law to protect racist white people (who they see as their own).

When the nation erupted into national protests over the murder of George Floyd, police departments across the country swore reform. Let’s take a look at the Sacramento police department for example.

All that money and I haven’t seen a lick of protecting or serving from Sac PD. Besides the weakest of apologies from Mayor Darrell Steinberg and city officials, the killings of Stephon Clark and Jeremy Southern have gone unaddressed. Similarly, when protests broke out in Sacramento following the murder of Floyd, Police Chief Daniel Hahn had his department lined up on J street, firing rubber bullets upon unarmed protesters like it was the Boston Massacre.

Still, police departments across the country continue to receive more funding to continually carry out their racist agenda. Someone explain to me how that makes any sense.

Ofc. Jeromy Sanford is a school resource officer but treats kids like this?! Lafayette LA police dept. has a long history of excessive force toward Black people, including fatally shooting Trey Pellerin and now THIS. Unacceptable!! pic.twitter.com/Nmb6nOuYOB

The trend of police brutality isn’t just happening in Sacramento. We’ve seen it in all parts of the country this summer with George Floyd, Breonna Taylor, Jacob Blake and Deon Kay just last week.

Some will try to discount my belief in racial bias throughout police departments by telling me that more white people are killed by police than Black people. Although that statement is technically correct, it doesn’t reflect the whole truth.

None of this should be surprising to anyone. The earliest form of policing in America was slave patrols who were groups of white men in charge of monitoring and disciplining slaves. The bias never disappeared. Those that think it did need to wake up and take a look around for themselves; history continues to repeat itself.

The sad reality is, no matter what they do, police will get preferential treatment. For example, before the Measure U sales tax was passed in Sacramento, city officials, like Steinberg, advocated for it by saying that the funds would be used to invest in financially impacted cities to help restore local parks, give back to youth sports programs and build up these communities.

According to the City of Sacramento’s proposed budget for the 2020-2021 fiscal year, Measure U garnered $89.7 million. Sac PD received over half the funds at $45.7 million, yet Youth, Parks and Community Enrichment, which fund afterschool programs and youth community center groups, only received $14.4 million.

It’s become clear that excessive police funding takes away funding from education, city enrichment and other services in low-income communities and in communities of color.

“The two justice systems were in stark contrast of each other… You can see that on video. That white young man got a high-five and some water. My son got seven to the back,” Jacob Blake’s father compares the Kenosha shooting to the police shooting of his son. pic.twitter.com/0pOHQv4GRF

To clarify, we still need police officers. I know there are good cops out there. However, we don’t need to be pouring billions into police departments when there is clearly a problem when it comes to how certain officers in departments across the country treat people of color — Black people in particular.

For cities wanting to truly address their Black communities’ concerns, start by defunding the police.