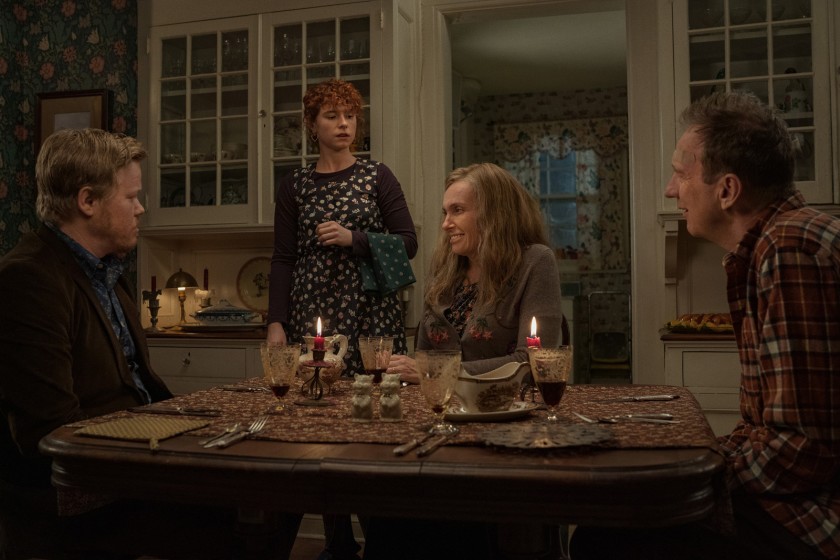 The Young Woman, played by Jessie Buckley, must endure an uncomfortable dinner with her boyfriend Jake, played by Jesse Plemons, and his parents, played by Toni Collette and David Thewlis. Photo courtesy of Netflix.

Charlie Kaufman’s new film “I’m Thinking of Ending Things” will make you question everything you see.

In the beginning of the film, the Young Woman and her boyfriend, Jake, played by Jesse Plemons, are driving to meet Jake’s parents, played by Toni Collette and David Thewlis, for the first time, but she is thinking of ending their relationship as she constantly says in her inner monologue. Once they arrive at Jake’s parents’ home, things seem off and the get together starts to unravel in strange ways.

On a description level, “I’m Thinking of Ending Things” seems basic enough. You could almost imagine the film to be a drama about a relationship in crisis. But as anyone who has seen anything written or directed by Kaufman would know, it’ll be more than that.

Since his first writing credit in 1999 for “Being John Malkovich,” Kaufman has crafted strange and unconventional stories that, in one way or another, reflect on our psyches and how we or others view ourselves. There’s a reason many people attribute his films to existential crises.

“I’m Thinking of Ending Things” feels like an amalgamation of many of the themes and ideas that Kaufman has explored in his other films, such as identity, mortality and memory. However, like many of his other films, there’s no way to pinpoint the exact theme the film is trying to convey.

The film questions: When in a relationship, what kind of person are we?

The main theme doesn’t even need to be based around a relationship. The film explores, in its own unique way, how we try to mend our identity into a person we hope will be well-liked. We do this because we fear the person we really are isn’t one people will care for.

This idea about identity isn’t new to Kaufman. In “Being John Malkovich,” people try to base their identity off of celebrity fame to receive appreciation from their peers and partners. Another of his films, “Anomalisa,” shows what can happen when we try to project the identity we want onto another person, and how that can backfire.

Identity is a major theme in a lot of Kaufman’s work, but in “I’m Thinking of Ending Things,” it becomes tricky because the audience can’t find an identity for Lucy. Or maybe it’s Lucia.

Both of Jake’s parents are strange and uncomfortable to be around, thanks in part to Thewlis and Collette’s brilliant performances. They both look dirty, the mother laughs for an uncomfortably long period of time, and both start to become too intrusive into Jake’s life and bring up any embarrassing memory they can.

As the night goes on, the Young Woman keeps bumping into the parents at different ages. Sometimes the mother is on her death bed or she’s picking up Jake’s toy as if he was still a child. Is time a construct in the house, or could these be memories colliding in the same moment?

Throughout the film, the focus cuts back to a janitor who works at a high school. No distinct answer is given on who he really is, but some kind of interpretation can be made to his involvement. Could the whole film be him reflecting on his past relationships by putting them all together into one person and his struggle with his mortality as he witnessed his parents dying? Could be.

The idea of our own mortality is so uncomfortably explored in the film. At one point, the father, who suffers from dementia, continually points out the room he is in like he hasn’t been in it for years. Meanwhile, the mother has to be fed by Jake like a child as she lays in a hospital bed.

Moments like this, on top of Lukasz Zal’s cinematography, create an uneasy and claustrophobic feeling throughout the film. It’s uncomfortable to confront our mortality, how others view us, and even certain memories so why not have the film reflect that feeling?

Trying desperately to figure out every single detail derails so much of the film as a whole. People will desperately want answers for many plot points in the film and take so much of it at face value. I dread the number of YouTube videos trying to explain everything.

There’s no way to pinpoint one exact “thing” the film is about. Why bother to desperately figure it all out when you can just get lost in the strange environment Kaufman has created?

“I’m Thinking of Ending Things” might be Kaufman at his most, well, Kaufman. He doubles  down on many of his existential themes with his usual wit and his affection for strange descents into our psyches. It might be one of his least accessible films for anyone not used to his style, but it’s a worthy experience for anyone willing to go through an existential crisis.