Chalk It Up! holds annual local festival despite coronavirus, fires 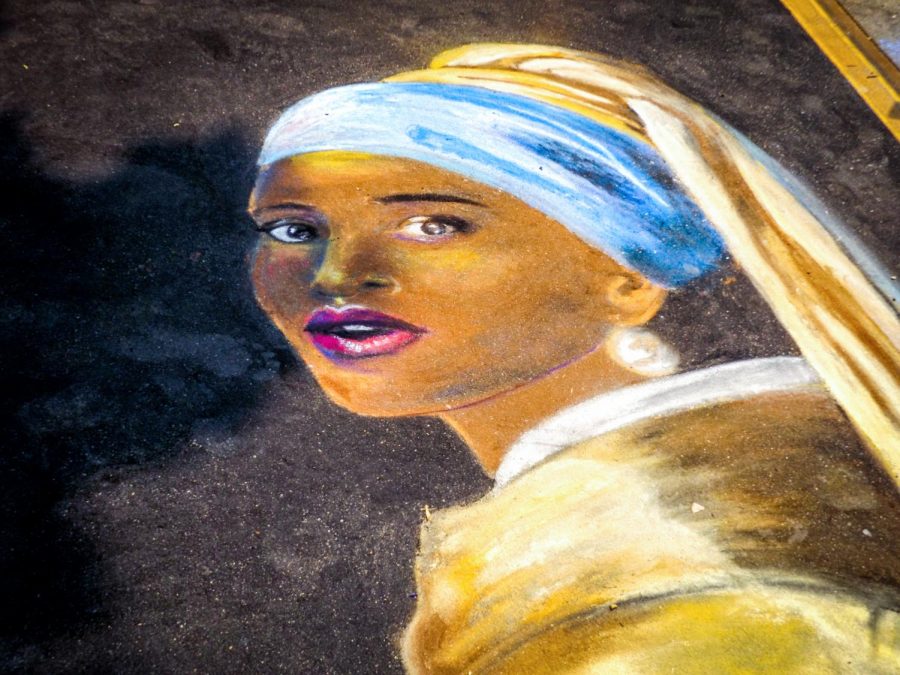 A modern take on a classic painting with Lupita Nyong'o as "The Girl with a Pearl Earring" chalked in John C. Fremont Park by Beth Mederros during the annual Chalk It Up! Festival. The festival was held throughout the greater Sacramento area on Sept. 5 through Sept. 7, 2020 to allow for social distancing at each site.

Chalk It Up!, a local organization that works to support youth art programs, held its annual festival where people decorate the sidewalk with beautiful displays of chalk artwork over Labor Day weekend, despite the heat, smoke and coronavirus concerns.

The event still drew crowds of people, but not nearly as many as it has in the past. This year the festival was spread out in various locations around Sacramento to allow for social distancing rather than one central location which has traditionally been Fremont Park in Midtown.

The musical portion of the festival went to an online oriented presence this year, hosting a virtual stage for musicians to be able to play “from their quarantine locations,” according to their website. This in turn meant attendees could access the festival at any time directly from their computer or phone.

Beth Mederros, a local artist back for her second year, chalked up a stunning modern take on a classic piece of art. Mederros incorporated actress Lupita Nyong’o into Johannes Vermeer’s “Girl with the Pearl Earring.”

“I just wanted to see a beautiful woman of color in art,” Mederros said.

Another artist in attendance was Julian Banderas, who worked with his family to create a landscape of a famous scene from the Disney film “The Lion King”: the presentation of Simba.

Sponsored by the Sacramento Life Center, a support center for unplanned or unsupported pregnancies, Banderas said he felt it was only right to create art of someone new to the world.

Upcoming gym 3rd Street Barbell sponsored Janese Armstrong and her portrait of bears. Included were bears of the teddy, koala and panda variety.

The sponsor said they wanted bears of any form in the art and she obliged, though her personal inspiration was diversity, all happy, with some barbells.