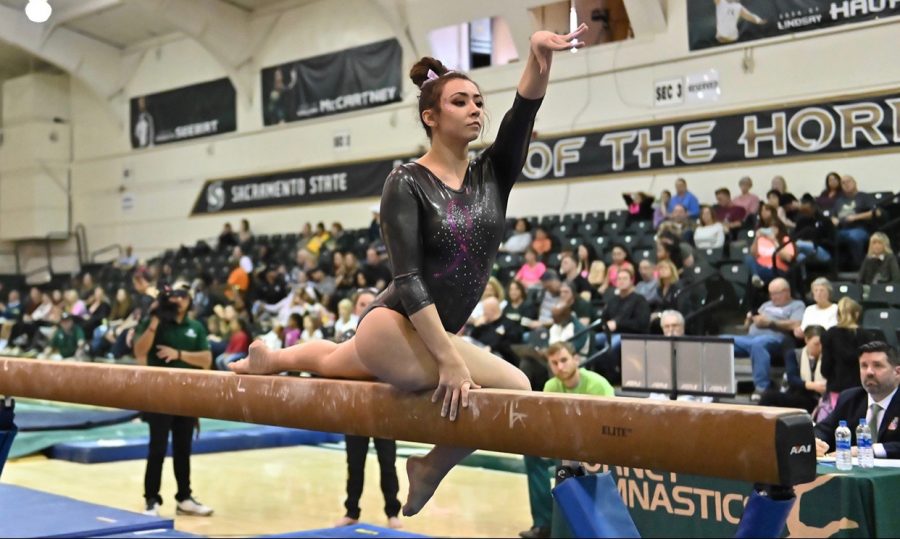 Sac State sophomore Amber Koeth poses on the balance beam during a meet last year at the Nest. Koeth spoke with The State Hornet about her battle with depression. Photo courtesy of Sac State Athletics.

Last season, Sacramento State gymnast Amber Koeth was one of the Hornets’ most consistent gymnasts on the balance beam where she averaged 9.780 and also earned first-team all-MPSF honors on beam.

Koeth didn’t show any weakness on the outside, but on the inside, she struggled with depression and suicidal thoughts.

Koeth grew up in Henderson, Nevada, and started gymnastics at a young age.

“One of my dad’s family friends saw me super active and told my mom they should put me in gymnastics,” Koeth said. “Then they put me in class when I was 4, and it took off from there.”

Koeth became a three-time national qualifier before she arrived at Sac State. She placed fifth on beam at USA Gymnastics Level 10 Nationals in 2016 and tied for ninth on the floor at the 2018 Junior Olympics.

Although Koeth had success in the gym, she had a more challenging time battling depression.

Koeth’s problems started during her junior year of high school. She began to develop body image issues while also suffering from a concussion in October.

“Starting in my junior year, I started to feel more depressed and alone from people,” Koeth said. “I felt like I was on the outside of people no matter what I did. I tried to insert myself into groups so hard, and I would just end up feeling alone.”

Koeth has a strong relationship with her mother, Sandi Koeth.

Though Amber Koeth was suffering from depression, Sandi Koeth wasn’t able to tell.

“She wasn’t much different than I saw,” Sandi Koeth said. ”She loved hanging with friends, she started teaching dance at the gym she trained at, she loved to choreograph routines and dances. I didn’t start noticing a difference until her freshman year of college.”

Amber Koeth did not tell anyone what she was going through.

“It became pretty easy to fake a smile and fake my happiness,” Amber Koeth said. “Nobody in high school had any indication. Not my parents, coaches, teammates, or friends knew. And it’s nothing of their fault. It was me hiding what I was going through.”

Amber Koeth’s mental state continued to deteriorate as she prepared to leave home for Sac State during the Fall 2018 semester.

During Amber Koeth’s freshman year, she experienced her first suicidal moment outside of her friend’s house.

“I was at my friend’s house, and I got into a really weird state of mind,” Amber Koeth said. “I left his house, and I walked around the street. I sat down on the sidewalk, and I was trying to grasp what I was going through. And that’s when I realized, I was OK with ending my life.”

The only thing to help Amber Koeth forget about her problems was gymnastics and her family. For the first time, she did not have those support groups anymore. She was away from her family and suffered another concussion that would keep her away from weeks of practice.

Amber Koeth fell into a deep stage of depression.

“I gained a lot of weight my freshman year,” Amber Koeth said. “I had a concussion for a while. I was not able to work out. The feeling began to progress and to overwhelm me. I would only get out of bed to go to practice. There was a point I didn’t eat for three days because I couldn’t physically get out of bed.”

Sandi Koeth didn’t know exactly what was wrong with her daughter, but she knew something had changed.

“She was growing more and more frustrated and depressed,” Sandi Koeth said. “I feel she had all these expectations, especially what she put on herself — I feel she thought she was letting people down. Dealing with all of this plus being away from home really took a toll on her.”

Amber Koeth’s most challenging time was in January of 2019. She had suicidal thoughts again.

“We were going to a party that night,” Amber Koeth said. “I was in my room by myself. Something just hit me. Everything overpowered everything I was feeling. I just felt this wave of darkness. And that’s when everything started to spiral.”

Amber Koeth’s dedication to her teammates saved her life that night.

“It kept me in contact with people,” Amber Koeth said. “It kept me from completely shutting off because I was driving my friend that night. I couldn’t just abandon them.”

Amber Koeth had finally reached her breaking point. She decided to tell someone about what she had been going through. But she didn’t turn to her mom, coaches or teammates. She turned to former Sac State trainer Michael Geha.

“He was almost like a big brother to all of us,” Koeth said. “I had this sense of trust with him like I haven’t had before.”

Geha said he made it a priority to be there for the athletes whenever they needed him.

“Working and interacting with my student-athletes on a daily basis allowed that level of trust to be gained,” Geha said. “My athletes knew that they could come to me for advice or assistance during difficult times.”

Amber Koeth’s next step was to tell her mom about her situation.

“I actually told my mom over text,” Amber Koeth said. “Because I didn’t want to hear her reaction. But once I finally brought it up to her, that was pretty tough. Especially because she couldn’t be there with me.”

Sandi Koeth said she was immediately worried when she read the text message.

“I wanted to jump on an airplane so I could just hug her, ” Sandi Koeth said. “I felt so helpless and scared. She and I are extremely close, so scared was the first thing I felt.”

This time Amber Koeth didn’t just rely on gymnastics to help her fight her battle. She decided to get professional help.

“Being able to get back into the gym helped a lot,” Amber Koeth said. “Once I started to open up to my friends, and my trainer had me see Dr. Gloria Petruzzelli, a counselor on campus. And just talking about it with people helped a lot.”

Today, Amber Koeth said she is in a better place and, with the help of her support group, has been able to overcome her battle with depression. She said what she learned through all this is that you can’t do it alone.

“Try to find the strength to tell at least one person,” Amber Koeth said. “Because that’s all it took for me was to finally own up to one person. Just having that one person support system could trigger a ripple effect.”

If you know any who is struggling with suicidal thoughts, please call the Suicide Prevention Hotline 800-273-8255. If you are a Sac State student, you can also call the counseling office at 916-278-6461.