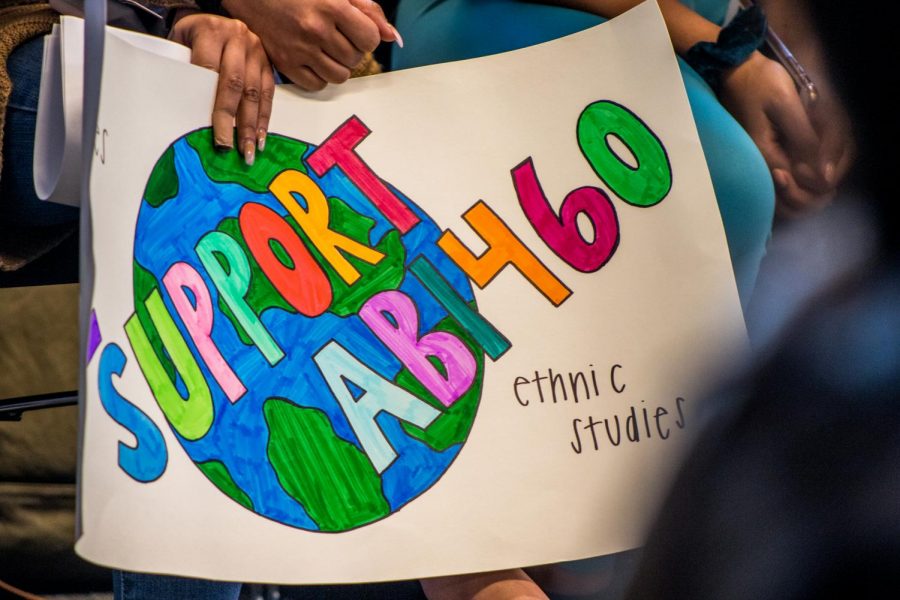 A demonstrator holds a sign advocating for AB 1460 in the University Union at a Faculty Senate meeting Feb. 27, 2020. The bill was signed into law by Gov. Gavin Newsom Aug. 3 and will require students to take and ethnic studies course to graduate starting with the class of 2025 .

Sacramento State students starting in the 2021-2022 academic year must complete a new ethnic studies course requirement that aims to go deeper into issues of race, inequality and oppression.

Assembly Bill 1460 was signed into law by Gov. Gavin Newsom Aug. 3 and will require students to complete ethnic studies courses that are still in the process of being developed. These newly defined courses will not replace Sac State’s existing race and ethnicity requirement, said Academic Policies Committee Chair Amber Gonzales.

“The new bill is not intended to slow down or make new bottlenecks for students,” Andrew Hertzoff, Sac State’s general education committee chair, said. “The legislation will not apply to any current students.”

AB 1460 will go into effect for students graduating in the 2024-2025 academic year and beyond and require undergraduate students to complete one 3-unit ethnic studies course in order to graduate.

According to the bill, universities will work with the California State University Council on Ethnic Studies and the Academic Senate of the CSU to develop “core competencies” to be achieved by students who take an ethnic studies course.

The Academic Senate will work with the Council on Ethnic Studies to submit “core competencies” for ethnic studies courses to the CSU Chancellor’s Office for revision by Oct. 1. Campus general education committees will not be able to review new and existing courses until November, after the Chancellor’s office finishes its revision.

“Everyone is always a little bit worried about the impact on students, budget and enrollment,” Sac State professor Andrea Walters said. “I think that most people agree that it is a good idea to increase exposure to ethnic studies.”

Walters is one of these teachers, and her economics in racism class aims to ground students’ beliefs with established theory and data instead of prejudices and social values.

“I think we’re in a really special time with so much change and growth,” Walters said. “Things that were lost in history are starting to pop up, and I hope these things make a really big difference.”

Walters’ class focuses on wage disparities, occupational cursors that steer people towards certain jobs, wealth inequality and housing discrimination, among other things. Her goal is to teach students to use this information to create their own beliefs about the world and why people are in certain positions.

Nancy Huante-Tzintzun is another Sac State professor who is ensuring students are able to ground their beliefs in data. She teaches La Raza Studies, which focuses on socio-cultural, political and economic changes that have influenced foreign policy and immigration patterns of Latinos to the United States.

“Students come in with the idea that they are going to celebrate foods and culture, but we are going to talk about a lot of deeper issues, and hopefully help you unlearn a lot of the things we learn in K-12 that were not necessarily true,” Huante-Tzintzun said.

Lindsay Diesta, an ethnic studies major, said previously at a Faculty Senate meeting in February that activity courses counting as race and ethnicity courses is offensive.

Ethnic studies professor Ayanna Yonemura said her students often walk away from their classes with more empathy and understanding after being exposed to the experiences of marginalized groups.

“Students have been shocked and surprised about experiences of other groups they do not identify with,” Yonemura said. “Hardships they perceive as only their own, or of their own group, are often more widely shared than they realized.”

With the passing of the bill there is still work to be done on getting classes developed and implemented.

“We’re really fortunate that we have an ethnic studies department, some other schools don’t,” Gonzales said. “We’re going to have an easier time implementing this requirement as long as this campus recognizes and supports [ethnic studies faculty] to guide us.”