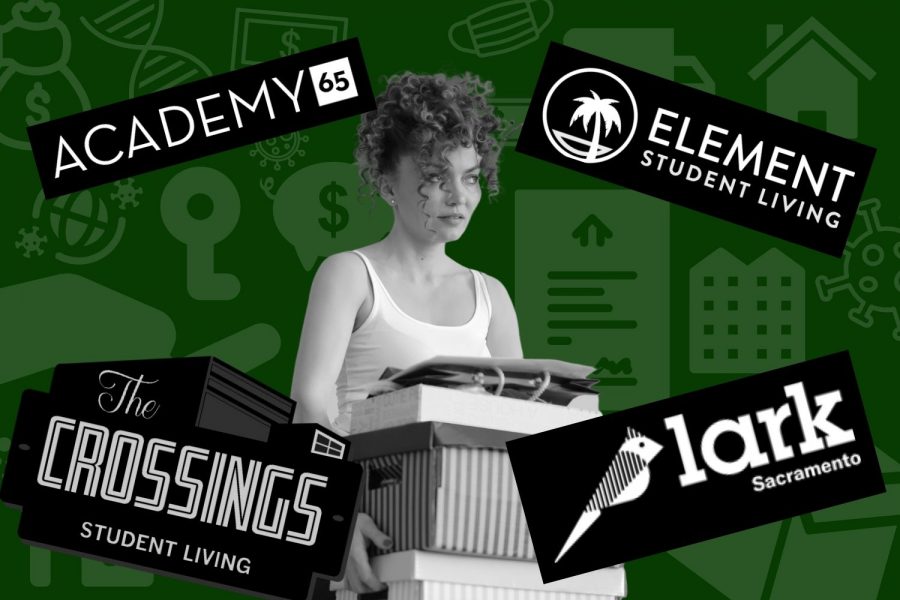 Some Sac State students living in some off-campus apartment complexes are trying to cancel their leases due to the COVID-19 pandemic and online-only courses, but say the complexes are forcing them to find replacement tenants or pay rent through the length of their contracts. Leases for many student living complexes began in August.

Sacramento State senior Amanda Landis had to move back home to care for her sister, who has autism, in order to allow her mother to go back to work.

With the COVID-19 pandemic surging, Landis is struggling financially and the prospect of paying rent for an apartment she can’t afford and doesn’t need is unrealistic, yet that’s the situation she finds herself in.

Landis says she signed a lease at the Lark, an off-campus apartment complex marketed to Sac State students, before the economic downfall and with a disappointed tone detailed how the pandemic has altered her plans for this school year.

“I had to move back to Southern California to take care of my sister with autism because her respite workers are unable to come due to COVID,” Landis said. “She lives with my single mom who left her job to take care of her, so paying almost $1,000 a month for an apartment I won’t step foot in is not an option for me.”

Since Sacramento State announced in May that it would be holding most instruction online for the fall semester, many students have chosen not to return to Sacramento. However, for students that live in the off-campus housing complexes near the campus, the process of getting out of their leases has been a rough one.

Campus-affiliated apartment complex Upper Eastside Lofts has granted its residents the opportunity to cancel their leases at no charge, but other student complexes such as the Lark, Element, Crossings, and Academy65 have not offered the same luxury.

The new leases for all of these apartment complexes begin this month, meaning residents will still be held liable for the rent payments this year until through next July.

Lark VP of Property Operations Keith Thompson said in a letter sent to the State Hornet that the complex still has to fulfill its financial obligations, including its mortgage, city and county property taxes, payroll, utilities and insurance.

“We rely on revenue from our contracted residents to meet our own obligations and to be able to keep the community operating safely for the hundreds of residents who make their homes there,” Thompson said. “This is why we are not in a position to simply allow open cancellation at this point.”

The State Hornet reached out to the Crossings, Element, and Academy65 multiple times but received no response.

The outrage from students led to the creation of the Coalition for Fair and Equitable Student and Community Housing, by Sacramento State senior and Element resident Jaspreet “Jesse” Khatra. She said she got 25 people to join in a couple weeks by posting in Sacramento Housing groups.

“We want all residents to get housing justice they deserve during this pandemic and in the future,” Khatra said. “We want these complexes to allow students to terminate leases if there is a public safety concern or extreme financial burden due to the lost sources of income during this time.”

Two big reasons students want to cancel their leases are COVID-19 transmission risks and unaffordability due to the economic downfall during the pandemic.

Currently, in order to get out of a lease at these properties, students have to pay a buyout fee, which varies at each property. Then they must find another student to take over their lease for them.

However, students like Sac State junior and Element resident Diego Gaytan are having trouble finding other students interested in taking over their leases because of the scarcity of students returning to the Sacramento area this fall semester.

“When I emailed resident manager Jessica Cullen, she brushed my concerns aside and basically told me that my only option would be to find someone to take over my lease and that she would waive the buyout fee if I did so,” Gaytan said.

Sac State senior and Element resident Destiny Rutledge said she has similarly been ignored when trying to contact management.

“I’ve had some inquiries from people interested in taking over my lease, but when I’ve tried to contact Jessica she hasn’t responded, which shows me she doesn’t care about my situation,” Rutledge said.

For Khatra the issue is the risk of exposure to the coronavirus from new roommates and the danger that poses to her family.

“My dad has diabetes and is at high risk for COVID-19,” Khatra said. “So if I move out, I can’t come back and see my family because I’m going to be with roommates that I’ve never met, and I also don’t know where they’ve been during the pandemic.”

Academy65 resident Jesus Garcia said that before the pandemic, Academy65 raised his rent by $150 per month.

“I thought I would be able to compensate by finding a job, but with the pandemic it’s been difficult,” Garcia said. “I thought that management would be caring about my situation, but they’ve shown no compassion or empathy during the situation.”

Though the California State University announced in May all campuses would be mostly online in the fall, students said they were pressured to renew their leases as early as last December, leaving them stuck with their leases.

In a text message sent in December, Academy65 warned Garcia that his lease renewing Aug. 1 would be canceled to make room for other residents.

“NOTICE: your renewal lease is still not complete. We’ve already reached the allotted amount of renewals for Tier 1 so if your lease is not signed by you and your guarantor by the end of the day we will need to cancel the lease to allow other residents to renew for Tier 1,” the message read.

It was after this message that Garcia decided to renew his lease.

Khatra, Landis, and Gaytan expressed that part of the decision to renew their lease was because of the same pressure Garcia had experienced.

Tell A Friend. Tag A Friend. Refer A Friend👩🏿‍🤝‍👨🏼👩🏻‍🤝‍👨🏽👫 • Limited spaces remain for Fall 2020. Interested in having your own bedroom and bathroom and sharing the common area with your best friends? Find out how you and your friends can secure your new home! We can’t wait to meet all of you🤗 • Now offering Virtual Tours 📱 916-736-2069 📧 www.elementstudentliving.com

The Element uses a prize system in order to attract students to renewing leases early and in some posts say remaining spaces are limited.

Khatra disagreed with the Element saying spaces are “limited,” saying that many students were waiting for lease takeovers. She said Element management refused to help with those takeovers.

In an interview with KCRA, tenant law attorney Jeffery Pettibone said that students may have limited options. He said the best option for students is to go before a judge and explain that they can’t honor the lease agreement because of an act of god, in this case meaning the COVID-19 pandemic.

On Mar. 17, the City of Sacramento established the Tenant Protection Program which placed a temporary moratorium on evicting residential tenants that are unable to pay rent due to loss of income caused by COVID-19. Any tenant can submit this form to their landlord to prove that they are unable to pay rent at this time.

The moratorium for residential tenants ends Sept. 30. All tenants have 120 days from the moratorium end date to pay back unpaid rent.