‘You were my bullies’: Sac State theatre and dance students confront faculty over systemic racism 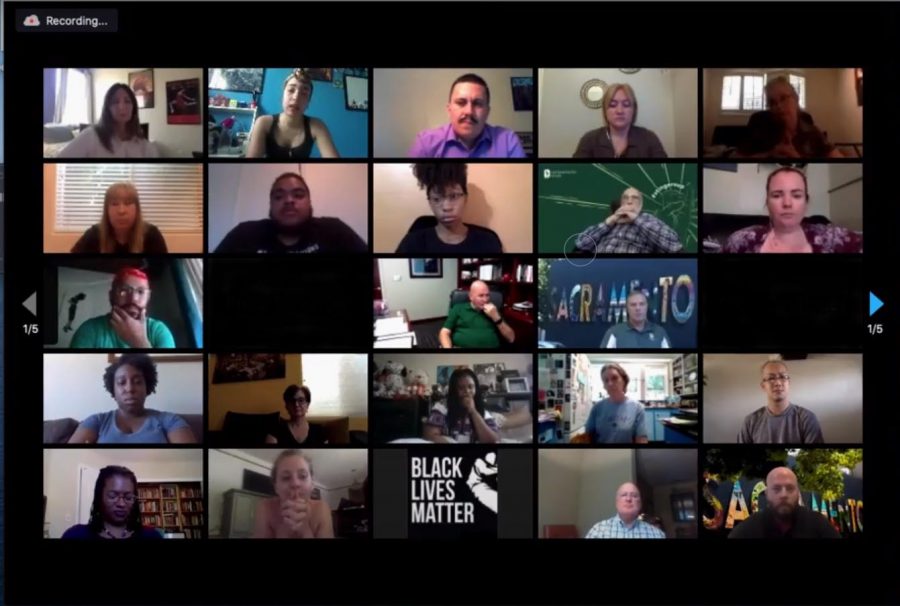 Students, staff and alumni attending a "BE FREE" meeting partake in discussion on June 25, 2020, at the second meeting via Zoom. "BE FREE" meetings were started to address systemic racism within Sac State's theatre and dance department.

“Black lives are and have always been subjugated to oppression in this country,” Sac State senior Miles Meckling said via email. “Members of the theatre and dance department including current students and alumni have banded together to express our stories of systematic oppression right here within our campus, and specifically in the theatre and dance department itself.”

The meetings, called Black Engaged Fundamental Racial Equity Everyday or “BE FREE” sessions, have been held Mondays 3 p.m. to 6 p.m. and Thursdays 11 a.m. to 3 p.m.

“We have met on multiple occasions through Zoom to find community, to share and listen to the wrongs we have endured during our education at Sac State and to brainstorm ideas on how to assist improvement upon these areas in our community on campus,” Meckling said.

The first of the session was held June 22 and had 27 participants made up almost entirely of students and alumni, with only three faculty members in attendance.

Several students took issue with this, pointing out how important this meeting was to them and how disappointing it was that they put something together to bring awareness to an issue the theatre and dance department staff was responsible for, and yet more staff did not show up.

The following meeting, held Thursday, June 25, had 108 participants and many more staff members on the call, including Sac State President Robert Nelsen.

Alumna Monique Crawford was asked by theatre and dance professor Roberto Pomo to lead the Zoom meetings. Crawford, who graduated in spring 2019 with a bachelor’s in theatre, said to achieve change at Sac State and in the community, they must first unpack the damage that has been done.

“What changes will be implemented in our department? What are they? What resources will be taught and brought into our institution through Zoom calls, through posts, through calls home?” Crawford asked the participants. “These are the topics that have been tossed around and rolled in the dirt for years, with no substantial change. Having one to three — if that — Black professors is not enough, having one to two Black dance courses is not enough.”

Meckling is one of several students who described feelings of oppression and exclusion from the theatre and dance department during his time at Sac State.

“I won’t say that you broke me, but you put me on an emotional rollercoaster of verbal and mental abuse during my time in the theatre and dance department,” Meckling said.  “I was bullied at Sacramento State University by you. I was bullied time and time again, and some days I was so over it I didn’t want to come to school, but I was not going to let you take my education from me. You were my bullies, you are my oppressors.”

Alumna Melicah Domalaon, who is Filipino-American, said she received the worst in-person treatment when she went to the department to get help to transfer one unit.

Domalaon explained that she studied abroad in spring 2018 at Oxford Brookes University. To transfer the unit, she brought in her transcripts, photos, assignments and the contact information for her Oxford professor.

Even with the information provided, Domalaon said she was still asked by the department chair Lorelei Bayne, to perform a monologue of the exact “Miss Julie” script she used at Oxford. Domalaon said at this time Bayne knew she no longer had the script.

Domalaon said she also needed help enrolling in classes for her musical theatre minor. Administrative support coordinator Carol Wang took her to professor Ed Brazo, Domalaon said he yelled at her, insisting that she first get the unit transferred. This happened in front of both Wang and vice chair Michelle Felten, and nothing was done about his actions.

After the incident with Brazo and having received no additional help from Felten or Bayne, Domalaon sent an email to Bayne, Felten and Brazo, saying she decided to drop her musical theatre minor. 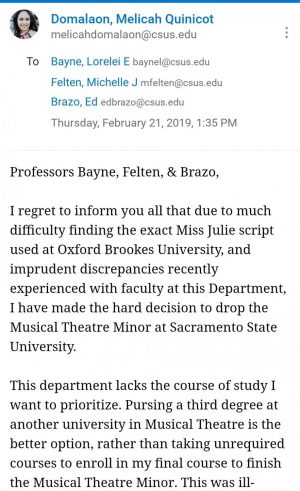 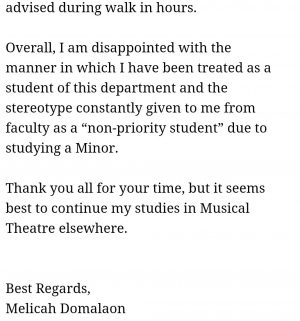 An email with Domalaon’s original email attached was sent not just to Felten and Brazo but to Domalaon’s peers. The email shows Brazo deliberately disrespecting not only Domalaon herself, but her brother and livelihood. 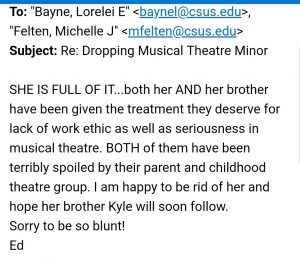 “How can someone like Ed Brazo be given the position to act as a professor and adviser?” Domalaon said. “Clearly there is a systematic problem that goes beyond me.”

Neither Felten nor Brazo replied to requests for comment on the students’ accusations.

An automated reply was sent back from Bayne, followed by an email from Brian Blomster, director of news and communications at Sac State, stating that Bayne is on leave and not available for comment.

“It’s disappointing that although I graduated in the early 2000s, I can give testimony to everything you just said,” Hayes said after hearing about current students’ negative experiences with department staff.

Nelsen, Provost Steve Perez and College of Arts and Letters Dean Sheree Meyer sent an email to Crawford inviting participants in the BE FREE movement to meet with university administration to “create a structure for ongoing engagement and action planning.”

However, the email also said they are “respectfully discontinuing participation in the BE FREE Zoom meetings and asking the faculty and staff of the department of theatre and dance to no longer attend, although each individual may make his or her own choice to do so.” 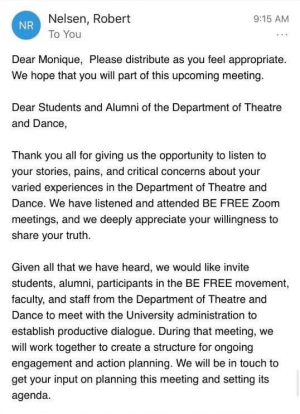 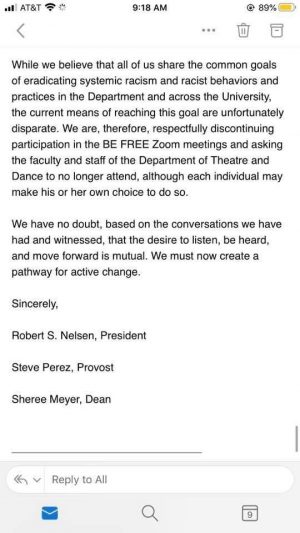 Blomster said Sac State takes the allegations raised in the student-led meetings seriously, and is working to make the university feel safer for Black students.

“Led by the Division of Inclusive Excellence, administration, faculty, and staff are working to ensure that a commitment to anti-racism and social justice results in growth, advancement and improvement in areas of the university not living up to those values,” Blomster said via email. “The result of that work will be to ensure that our Black students feel safe, validated and valued while receiving the best educational experience possible.”

The College of Arts and Letters is working with all its departments, including theatre and dance, to address racism in curricula, pedagogy, department culture, faculty hiring, staffing, training and development, Blomster said.

A previous version of this article incorrectly stated that department chair Lorelei Bayne was on leave due to the allegations with in the department. That comment was attributed to Brian Blomster who only stated that she was “on leave and not available for comment.” The article has been updated to reflect the correct statement.

This article has been updated to note that “BE FREE” is an acronym for Black Engaged Fundamental Racial Equity Everyday.