Conference to work with NCAA to have championships moved to spring 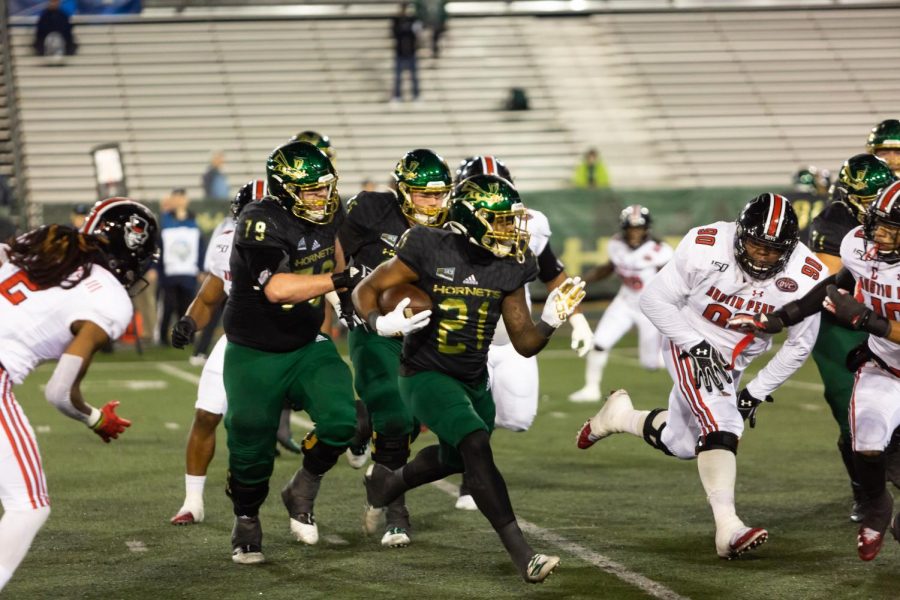 Sac State junior running back BJ Perkinson rushes for a first down against Austin Peay on Saturday, Dec. 7 at Hornet Stadium. The Hornets football team is just one of the Sac State sports' teams whose season will be postponed due to postponement of Big Sky Conference fall sports competition.

The Big Sky Conference has postponed fall 2020 football competition, pushing back the Hornet football team’s season to the spring, according to Sacramento State President Robert Nelsen.

16 of the 21 Sacramento State intercollegiate sports teams are affiliates of the Big Sky Conference — however, only the football season has been postponed at this point, Nelsen said.

The decision was made by university presidents with football teams that play in the Big Sky Conference after the athletic directors of the schools made the recommendation to postpone, Nelsen said.

This is a big blow to the Sacramento State football team, which finished 9-4 under Coach Troy Taylor and earned a share of the Big Sky Conference Title in 2019.

Nelsen added that the university presidents and Big Sky will work with the NCAA to try to get the football championship moved to the spring.

The decision comes after Tuesday’s NCAA Board of Governors meeting, in which the board could not come to a conclusion about fall championships.

It also comes just one week after the cancellation of the Big West Conference, which pushed back the Sac State men’s soccer season.

The NCAA board is expected to come to a decision on fall championships in two weeks.

Other Sac State sports that have fall competition within the Big Sky Conference include men’s and women’s cross country, women’s soccer and women’s volleyball — but no decision has been made on these teams’ seasons yet.

Nelsen said if the NCAA doesn’t postpone the championships, they will try to have those sports continue.

“If our students have a chance to be in championships we want them to have that opportunity,” Nelsen said.

Nelsen said it’s conceivable to put 15 women on a volleyball team in a bubble, but putting 82 football players in a bubble was just not realistic.