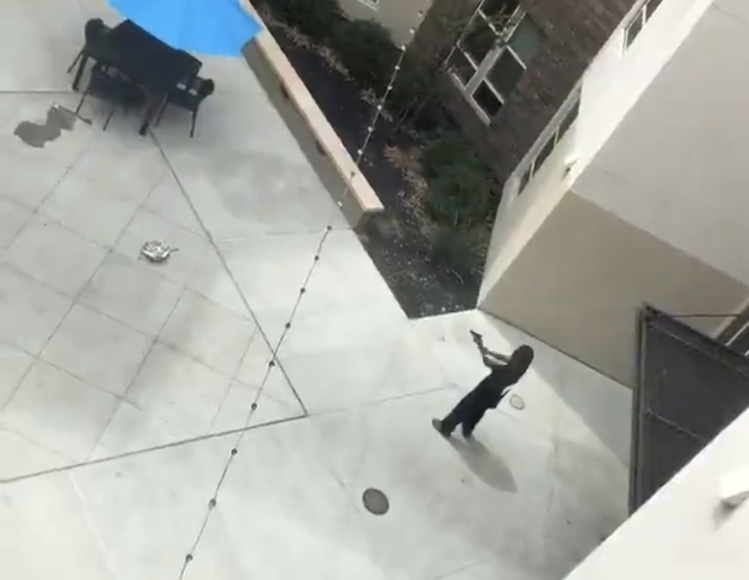 A man points a gun out of frame in a screenshot from a video of a shooting that took place at The Crossings Tuesday, July 21, 2020. The man was shot by the Sacramento police, and later transported to the hospital.

The man who died was identified Wednesday by a friend who lived at the Crossings as Jeremy Southern, 22, according to The Sacramento Bee.

Southern was transported to the hospital in critical condition and was later pronounced dead, according to a press release from the Sacramento Police Department.

🚨SPD is on scene of an officer involved shooting in the 2900 block of Ramona Ave. No officers were injured & the suspect has been transported to a hospital in unknown condition. ⚠️Ramona Ave is closed. Follow this thread for Official updates and the media staging point #sacpd pic.twitter.com/YoVAjlm6eF

The video shows Southern pointing a gun at someone or something out of frame. Later he is shown on the ground, and the person taking the video says that he has been shot. Southern then begins to crawl forward, a gunshot is heard, and he stops.

Police were investigating a shooting that occurred last week at The Crossings when they observed a male who matched the description of a person they were looking for in connection to that shooting, said Sabrina Briggs, a public information officer for the Sacramento Police Department.

“Officers attempted to contact that subject and during that contact the suspect retrieved a handgun and pointed it at officers,” Briggs said.

One officer fired at Southern and he sustained at least one gunshot wound, Briggs said.

Southern was released from prison this year after being convicted of committing lewd and lascivious acts with a child under 14 years of age in 2016.

An email to residents informed them that an “incident… that involved guns being drawn with the Sacramento Police Department” had occurred and advised them to stay in their apartments until the police department has cleared the area.

On Wednesday, The Crossings’ management sent another email to their tenants saying that Southern was a frequent guest of a resident there and that they have since had their lease terminated.

The Crossings is an off-campus student living complex popular among Sacramento State students.

There had been speculation that Southern was a Sac State student on social media but Anita Fitzhugh, a Sac State public information officer said he was not a student.

A vigil will be held for Southern Thursday, according to a Facebook post by Sacramento’s Black Lives Matter chapter.