The State Hornet • May 5, 2020 • https://statehornet.com/2020/05/sac-state-study-abroad-canceled-coronavirus-opportunity/

‘That was kinda my only chance’: Sac State students speak on study abroad cancellations

Programs suspended due to COVID-19 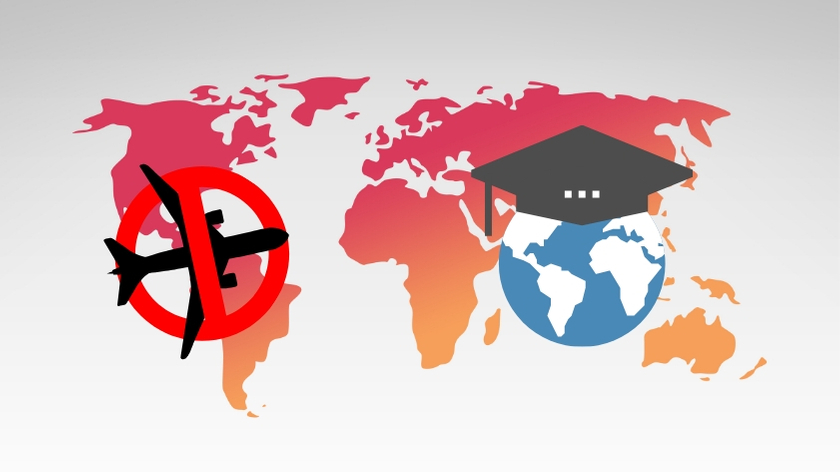 Sac State announced that all study abroad programs were suspended for fall 2020 due to COVID-19. Students are now left to reevaluate their plans. Graphic made on Canva.

Liliana Mazza, an international relations and geography double major at Sacramento State said that she has wanted to study abroad in Brazil since high school.

Her dream was crushed after Sac State suspended all study abroad programs for fall 2020 due to the COVID-19 pandemic.

Mazza said she won’t be able to study abroad during spring 2021, because there’s a class she needs to take that is only available in the spring.

Instead of studying abroad, Mazza said she hopes to travel to Brazil at some point during her time at Sac State, depending on whether or not she will join the military.

Like Mazza, Sac State seniors Jacob Shane and Robert Gomez were hoping to study abroad in the fall. Shane and Gomez were planning on going to Japan.

The two were set to study in different areas of Japan, but had hopes of meeting up there, given the opportunity. Shane and Gomez are friends,

Shane, a communications studies major and Japanese minor said he is now unsure about when he will get to graduate. He planned on finishing his upper division courses for his minor while studying abroad.

Shane said he has always had an interest in learning Japanese, and even spent some time in Japan this past winter. He said he’d like to pursue a career with the Japanese Exchange and Teaching Program.

Gomez, an English major, is also interested in one day teaching in Japan. If the program had not been canceled, this would have been his first time in Japan.

“In the future, I want to teach abroad and I wanted to get a better idea of what living in Japan would be like before I think about going there,” Gomez said. “Studying in Japan would have aligned with my goals anyway, so studying out there seemed like a good idea.”

Shane said he was disappointed in the decision, but understood that Sac State did not have an option.

“When you’re in the position to protect people but also potentially stop people from pursuing what they want to do, that’s a hard balance and I’m not envious of that position,” Shane said.

Mazza said that it’s good that Sac State is taking precautions since they don’t know what’s going to happen in the coming months, but would have wanted the University Study Abroad Consortium (USAC) to have made the final call.

USAC currently has it noted on their website that their goal is to continue to support students’ aspirations and dreams of studying abroad and that they will not cancel programs prematurely until they are certain onsite operations won’t be available.

Sac State is currently providing virtual services and advising for students within the study abroad program during this transition, according to their website.