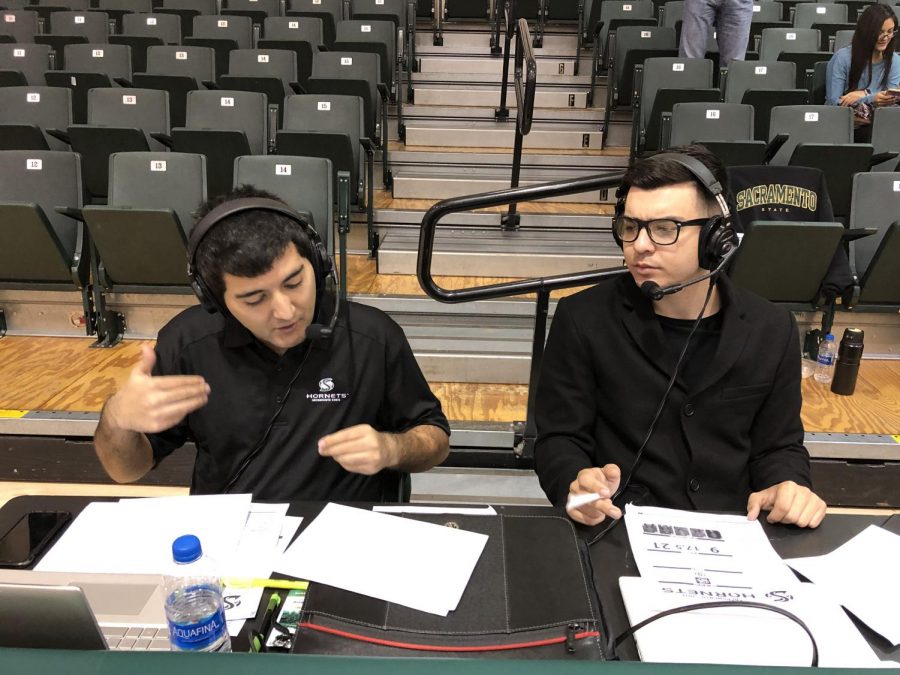 Former KSSU Sports Director Anthony Rifenburg (left) and Keith Jouganatos broadcast a men's basketball game on Nov. 11, 2018 at the Nest. The KSSU sports department's agreement with the Athletics Department has expired, and will not be renewed.

With the cancellation of spring athletics at Sacramento State due to the COVID-19 pandemic, there has been a lull in sports broadcasting, and there will continue to be one indefinitely.

In April, the sports department at KSSU, Sac State’s student-run radio station, was informed by the athletics department that their agreement to continue radio broadcasting was ending and they would no longer air games with the station.

Sac State Director of Athletics Mark Orr said it wasn’t a cut that was made, but an expiration in the agreement and the decision to not renew.

“We weren’t able to continue to make the financial commitment that the previous (memorandum of understanding) had,” Orr said. “It wasn’t that we wouldn’t still do student radio, we would be happy to, just not to the degree that the previous MOU had.”

A memorandum of understanding is a non-legally binding document that outlines an agreement between two or more parties.

Orr said that the athletics department would be willing to renew if it fit not only the financial needs, but services that are much different than what was written years ago in the original memorandum. He suggested new platforms like podcasts as an alternative to traditional radio sports shows.

“There’s new technology, there are better ways we can deliver content, things we should do with social media,” Orr said. “And none of that was built into the previous MOU.”

Myckena Guerrero, the student sports director at KSSU, said she was surprised to hear that the sports section was being cut.

“I was kind of in shock because I didn’t even know that it was even a possibility that it was going to happen,” Guerrero said. “I know that it really affected a lot of my guys because for some of them this is the only outlet they have to try to pursue their sports broadcasting.”

Sac State’s communication studies department currently does not offer a broadcasting program. There is only one elective class offered to students with an interest in broadcast called multimedia storytelling.

Guerrero said she’s sad to see that the relationships that they’ve long tried to build with the coaches and players will no longer be there.

“I really got to know my people, and the athletes and coaches to get the word out there for them too,” Guerrero said. “With what we do, it’s not really about us, it’s about the players and the coaches and taking care of their stories, and that was something we really tried to incorporate this year.”

Guerrero also said she’s worried for her current team because KSSU was the only way for a lot of them to pursue their interest in sports journalism.

“My fear is that they put all their eggs in one basket because there’s not a lot of opportunities for them in this area at Sac State,” Guerrero said. “It’s a really hard career to try to pursue and having something taken away from you that you love, it really sucks.”

Brandon Gardner, a graduating communication studies major, said that KSSU helped him improve his sports commentary and broadened his skills on his work resume.

“One thing that KSSU has done is it provided me film and audio to put together,” Gardner said. “It gave me practice, it gave me a vision of how good I could (and) will be, and it gave me opportunities that my job at Bonneville International couldn’t provide for me, which is getting on air and actually talking.”

Aaron Jackson, a journalism major and a former State Hornet staff member, is a DJ on KSSU and shared the same sentiment. He said that although he is graduating, he knows KSSU has been impactful for those who are pursuing sports broadcasting.

“KSSU helped me gain more experience and helped me gain confidence in calling games either as a color or play-by-play commentator,” Jackson said. “It forced me to do more research to prepare and I learned by working with others.”

Jackson added that it was nice to be able to build relationships and friendships within the sports section and have the chance to host his own show and get out his own opinions on the world of sports.

“I think KSSU is great because people want to give you the freedom to get yourself out there,” Jackson said. “I’m just disappointed that those into sports broadcasting won’t be able to get that same experience going forward.”

Additional reporting by Shaun Holkko, who is a former KSSU show host.