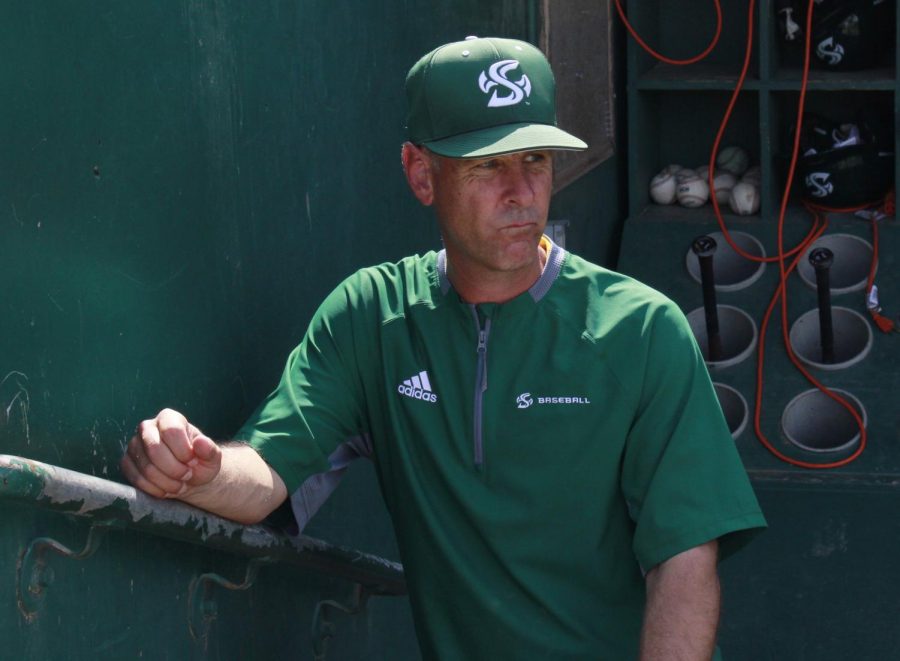 Sac State baseball coach Reggie Christiansen poses for a photo at John Smith Field. Christiansen has been relying on high school and travel ball coaches to get opinions on potential recruits.

College sports coaches have been fostering new and innovative ways to recruit players amid the stay-at-home order to ensure they still have successful teams and are able to bring in the right players for their programs.

The year-round recruitment process usually entails visits to the campuses, facilities and dorms, as well as meeting athletics staff and other current players. Colleges analyze videos for playing ability, IQ of the sport, athletic metrics and abilities. Coaches also take into account factors such as academics, social media, upbringing and more.

The State Hornet interviewed a few head coaches at Sac State and asked how the restrictions of the COVID-19 pandemic have affected them in the recruiting process.

Baseball coach Reggie Christiansen said when their season was suspended, they shifted their gears to roster spots for next year and the MLB draft.

Spring athletes were granted another year of eligibility by the NCAA, leaving a lot of senior athletes to decide whether they wanted to come back and pursue a final year of college sports. However, according to Christiansen, about five to six players could be drafted, leaving a lot of questions right now.

“We’re certainly really excited about the group of incoming kids that we have right now,” Christiansen said. “We have a really strong recruiting class coming in and you certainly don’t want to block those guys from having a chance to play so it’s certainly a delicate issue.”

Christiansen added it is a wait and see game right now for their team, with the 2021 and 2022 classes on pause for now.

Christiansen said he has been relying on high school and travel ball coaches to get opinions on potential recruits.

“We’ve seen a lot of these kids play, it’s just maybe now not getting the chance to see them like four times and just getting a chance to see them once or twice,” Christiansen said. “But video does play a part of it, (you) certainly need a screening process and the recruiting process now you can find access to video and stats at your fingertips and 15 years ago that wasn’t the case. So kids don’t really slip through the cracks anymore.”

Christiansen added that he tries to recruit guys he wants to be around.

“I think we try to be pretty picky, I’m willing to pass on a prospect if he’s not the right kind of kid,” Christiansen said. “I think we’ve had a great deal of success here and it’s because we have the right people here.”

The softball team had a different reaction to their season coming to an early end.

Coach Lori Perez said that initially, it was a massive shock and they are trying to make the best of it, but are devastated for those losing out on their senior seasons.

“You just don’t envision this is how it’s going to play out,” Perez said. “They appreciated the year back of eligibility but knew that that came with challenges, with scholarships, with roster size, it came with a lot of questions but overall it’s just really dealing with the fact they had worked so hard for how long they have been playing ball for to get to this moment, to get to the senior year and then to have it end so abruptly, it was shocking and I think hard for them to digest.”

The sports with seasons that ended abruptly seem to have the most questions, and a lot of decisions to be made for current and future players.

“I don’t know how much we’re going to be able to be out recruiting,” Perez said. “I’m at a pause, it’s not high on the priority list right now because I want to deal with our current players and deal with the players that are coming in and the people that are going to be here, in the immediate future.”

Perez said she has relied a lot on the network she has already grown for recruiting. She said that their program tends to recruit from a few of the same teams and organizations because they know the coaches, they trust that they’re training the players and teaching them the game and that those players are going to be ready for them.

Summer is when most sports flourish, with tournaments being held all around the country and all college and high school athletes being put on display for college recruiters. However, all summer sports and tournaments might be canceled.

Soccer coach Michael Linenberger said he has had to rely on video and technology now more than ever, but an essential part of the recruitment process has been lost.

“There’s no substitute for going out and watching these guys play live,” Linenberger said. “You’re also missing bringing the kids on campus for a visit and getting to know the kids and the parents a little bit more. They get to know us, they spend time with the players, the players get to know them. So you’re missing some valuable steps in the process right now as well.”

Linenberger added that final decisions on who they give roster spots to could be affected because they don’t have as much information as they normally do to make the final decision on players.

In terms of scholarships, Linenberger said that there’s been talk of budget cuts due to the economic impact the COVID-19 pandemic has had.

“We have been told that we need to be prepared for budget cuts and we need to start thinking about what areas of our operating budget we would cut first and kind of prioritize that list a little bit,” Linenberger said. “We’re currently going through that process right now but hopefully it doesn’t impact student-athletes, scholarship or rosters.”

When the Sac State men’s basketball team went 16-14 this season and weren’t able to finish the Big Sky tournament due to its cancellation, coach Brian Katz said they were very disappointed but understood this national pandemic was bigger than basketball. However, he said he felt they could have made noise in the tournament.

In terms of recruiting, the inability to visit the athletes has made it different and not seeing initial team camaraderie can be an issue, Katz said.

“We’re obviously concerned about this summer if there are no AAU events, summer events, then essentially you’re not seeing these players now,” Katz said. “Certainly with technology, I’ve got some film on some guys I’m looking at like right now that are in the 2021 class, I get that’s all that we could do right now. It’s just going to cause us to be a little more creative, there’s certainly nothing like seeing somebody in person but film is the next best thing at the moment.”

Football coach Troy Taylor said losing summer camps could be a tough situation because that is where athletes have the chance to interact. Taylor said they often look for athletes who love football and pass academic requirements, and see if they are guys that fit into the culture and are disciplined — not necessarily the biggest and fastest guys.

Due to the COVID-19 pandemic, the NCAA extended the dead period to July 31. However, on Tuesday, they announced that college coaches can now have unlimited calls with recruits. Previously, coaches were only allowed a certain number of hours for meetings via Zoom or over the phone within a particular time, according to Taylor.

Taylor said the most they can do is check in with their players since they can’t watch their workouts or monitor them.

With a lot still to be determined and uncertain, particularly for the future of recruiting, Sac State coaches are continuing to adapt as best they can to ensure they have the most successful teams possible for next season.

“It’s always been a very detailed, deliberate evaluation process,” Katz said. “Really this hasn’t changed it, it’s made it a little more difficult, which, I mean look, everything in this pandemic is more difficult. We all just have to adapt and adjust.”