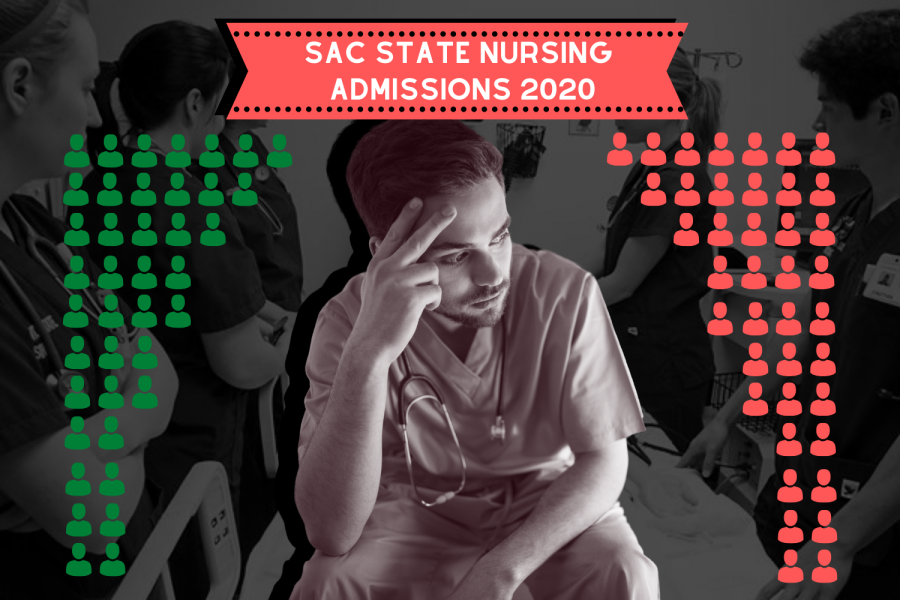 Sac State cut nursing school admissions from 80 students to 40 students for the fall 2020 semester due to seniors not being able to finish their clinicals. Background image by Ashley Neal. Photo via Canva. Graphic by Chris Wong.

Only 40 students will be accepted to Sacramento State’s competitive nursing program this fall due to uncertainties surrounding whether students will be able to fulfill required courses amid the ongoing pandemic, according to university School of Nursing administrators.

An email sent to nursing applicants said over 311 applications were received, but only 40 seats are available, down from the usual 80 admitted each semester.

“Our goals and hopes were to be able to admit some students as opposed to none,” said Heidi Travis, the admissions advisor for the School of Nursing, in the email.

Travis said the plan may change depending on how the pandemic develops and how the university responds.

Tanya Altmann, chair of the School of Nursing, said in an email that it feels wrong to deny more students. She said some other nursing programs are not admitting for fall and even spring.

“It saddens me as there are so many students wanting nursing and a looming nursing shortage,” Altmann said.

All but one of the 72 nursing students in their final semester will graduate with help from UC Davis Medical Center, Altmann said. She added that students in the other three semesters of the nursing program were unable to complete clinicals and will receive incomplete grades in at least one class.

Altmann said that Sac State President Robert Nelsen’s statement that 271 nursing students are unable to graduate is incorrect. Nelsen used this incorrect figure at Monday’s virtual town hall addressing the COVID-19 pandemic, where he said that the nurses would not be able to graduate because full clinical placements at hospitals were not possible.

As of the time of publication, Altmann has yet to respond to further email requests for comment, including how many students will receive incomplete grades and how Nelsen got that number.

Only 80 students are admitted into the program each semester since at least 2012.

“It’s definitely going to be more competitive than it already is,” said Logan Tuazon, a first-year, expressed interest, nursing student.

Applicants will be notified if they were accepted into the program by email Friday after 5 p.m. Sac State has the 16th highest rated nursing program in California by Registered Nursing.org’s program rankings.

Nursing students have always needed to prove their academic skills if they wish to be accepted. The 76 students who were enrolled last spring semester had an average “adjusted” GPA of 3.995, according to data from the School of Nursing.

Nursing students must also do clinicals, the process of being sent to a hospital and doing direct patient care. The California Board of Registered Nurses (BRN) regulates that 75% of the work done in clinicals is that of direct patient care while the other 25% is indirect training such as simulations, hospital orientations and hospital equipment training.

The program currently has no labs due to classes no longer being held face-to-face. Altmann said that if labs resume, they may require social distancing.

Apart from potentially not being admitted into the program, some students are worried about how they will take the Test of Academic Skills (TEAS) to get into the program. The test consists of 170 multiple-choice questions that are designed to test skills students will need to perform in the program in the areas of reading, math, science and English. “I don’t know how the TEAS test is gonna go since the clock is kinda ticking,” Tuazon said.

A previous version of this article and headline reported that 271 nursing students are unable to graduate, attributed to a statement from Sacramento State President Robert Nelsen at a town hall meeting citing that number.

Tanya Altmann, chair of the School of Nursing, sent an email saying Nelsen’s figures were incorrect and that of the 72 students in their last semester, only one will be unable to graduate. The article has been updated to reflect this correction and reflect additional comments from Altmann.