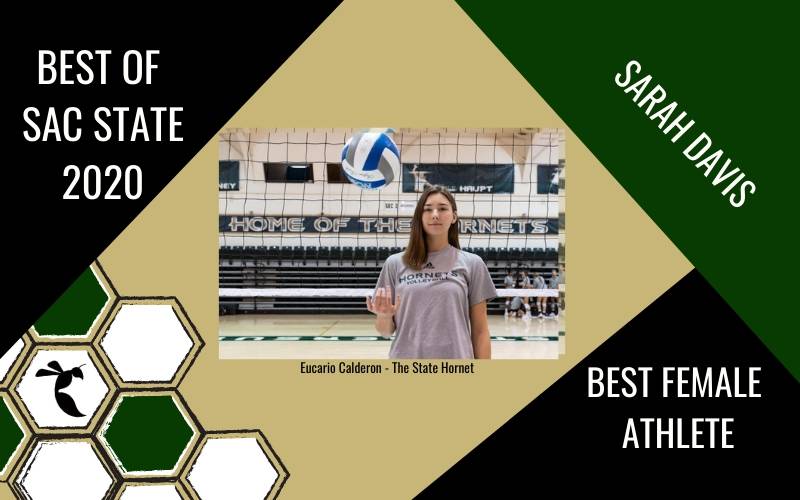 On Oct. 31 of last year, senior outside hitter Sarah Davis was only nine kills away from reaching the 1,000 career-kill milestone and cementing herself into an elite club of volleyball players at Sacramento State.

With the University of Idaho leading late in the second set, Davis recorded her 425th kill of the season to bring her career total to 1,000. Davis ended the night with 22 kills to help her team recover from an 0-2 deficit and take down the Vandals in five sets.

In her senior year alone, Davis recorded 542 kills, and was ranked 12th in the nation.

Davis said she began playing volleyball her freshman year of high school because her friends played and she thought it was “something fun to do.” However, she soon realized it was her passion

“I just wanted to be on the team with girls who I could share a passion with and drive and we can work towards achieving something amazing because there’s nothing better than playing on the team who just wants to win so bad,” Davis said. ”You can feel that energy, everybody is constantly pushing each other to be the best they can be and constantly helping each other.”

Now Davis is heading into her final week of college, soon to graduate with a degree in communication studies. Davis has left a legacy at Sac State, especially in her four years of playing both volleyball and beach volleyball.

Davis finished her indoor career with 1,117 kills and was on First Team All-Big Sky and Big Sky All-Academic in her senior season. In her final season, Davis averaged 4.17 kills per set, which put her in the top 10 in kills per set in a season in Sac State’s record book.

Davis also had 617 points which ranked her 10th in the nation of the NCAA women’s volleyball Division I athletes.

“It means everything to me,” Davis said about winning the award. “It says something that a lot of teams on campus play hard schedules and we do really well against those teams and that that says something for our programs and our coaches and how hard we work.”

Davis said that Sac State may be overlooked or underestimated for their athletics and added that every athlete at Sac State has talent and is at a high level.

“I’m just so grateful that people also thought or could see that talent,”Davis said. “I know any female athlete could have won this award. Every single female who plays here is absolutely amazing. I’m just really honored and grateful to be here and had the chance to show my talents and provide something to the program.”

Coach Ruben Volta commended the work ethic Davis exhibited during the season and said that Davis is someone that the team depends on night in and night out.

“She’s fantastic and extremely easy to coach to be honest, someone who did it through hard work all the time and heart,” Volta said. “Over the course of her career, she worked really hard to get strong and fit and be ready to handle a heavy workload which she got from us this past year.”

Junior middle blocker Cianna Andrews, Davis’ roommate said Davis is reliable in any situation you put her in and is super positive. Andrews also added that she leads by example.

Junior outside hitter Macey Hayden said Davis is a great athlete because she is always a few steps ahead.

”Her aggressive mindset really keeps the whole team keep on track and is a big motivator for everyone to push themselves because you see how hard she pushes herself all the time,” Hayden said.

When asked what will she miss most about volleyball, Davis said “the volleyball drug.”

“It’s just like the feeling of working so hard and putting everything you have into something and seeing it pay off,” Davis said. “I call it the ‘volleyball drug’ because when you do something great in volleyball, it just is the best feeling in the entire world.”

Davis’s beach volleyball season ended abruptly due to the pandemic, she was hit a little earlier than expected with the thought of going to the next phase of her life.. However, Davis said she will use “the volleyball drug” and what she has learned in sports and apply it to the rest of her life in many of her future goals.

Davis plans to pursue a career as a dental hygienist and continue her involvement in sports as a coach in the future.