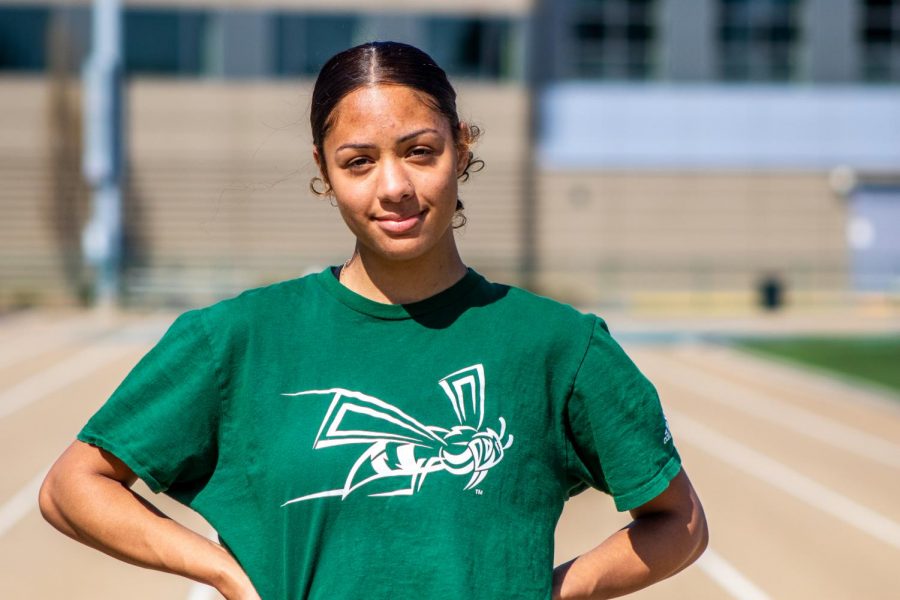 Sac State junior sprinter Mikayla Revera poses on the track at Hornet Stadium on March 10. Revera finished the indoor season with career bests in the 200 and 400 races.

Some athletes have a defining meet or game in their athletic career to remind them why they love the sport.

For Sacramento State junior sprinter Mikayla Revera, it’s the feeling of being part of something bigger on and off the field and having a strong team bond.

“Once I joined my club track team, Umoja, in San Jose they made me feel like family,” Revera said. “They made practice fun to come to and overall made me fall in love with the sport.”

Revera committed to Sac State after graduating from Santa Catalina School in Monterey. She was a three-time state qualifier, finished 18th in the state meet in the 400, was the Central Coast Section champion in the 400 and placed fifth in the 200.

“I came here because I’ve done club since I was 9 and they were like a family to me and when I visited Sac everyone was just like a family,” Revera said. “We all support each other and they’re there for me, not even just in track but outside of it.”

Revera said the bond her team shares contributes to the success they see out on the track.

Sophomore sprinter A’Miracle Barlett described Revera as a supportive and strong person both on and off the field.

“She’s overall a really good person and really smart,” Barlett said. “This is my second year on the team with Mikayla and she is definitely one of my number ones.”

Revera had a successful performance at the Big Sky Indoor Championships on Feb. 28 and 29. She finished first with a season best time of 3:47:07 for the 4×400 relay with teammates Shilah Bedingfield, Artearra Coffey and Jasmin Correa. Their relay ranked eighth in program history.

One obstacle Revera has faced is an injury to her back during her freshman year. Revera said accepting that she can’t control when her back hurts has been her biggest learning experience.

“In the fall, training has been hard because I’m balancing a back injury so I’ve been trying to figure out what works for me and what doesn’t,” Revera said. “I’ve had to accept that sometimes you can’t get through a race but you have to trust yourself and trust the process.”

Revera mentioned that the mental aspect of the sport is something she focuses on to help her through the tough moments.

“You can take it as practice or training just don’t let it get to you mentally because you have to remember that, yes, this is serious but it’s also supposed to be for fun,” said Revera. “That’s something I think a lot of people forget sometimes.”

Correa, a sophomore sprinter, said Revera was always available and stood as a mentor to herself and others when she came in as a freshman last year.

“On the track, she is extremely hard working,” Correa said. “She’s had an issue with her back but that doesn’t keep her from always putting in 100%.”

During the championships on Feb. 29, Revera also became Sac State’s first Hornet since Dominique Wittington during the 2014 season to win the 400 at 54.13, the second best time ever run by a Sac State woman.

Track and field coach Kimberly Graham Miller has been Sac State’s coach for five years. Miller said Revera has struggled with some injuries but she has only grown and gotten stronger.

Revera described Miller as a mentor both on and off the field.

Revera’s season was cut short due to coronavirus cancellations, and said the plan is to maintain being in shape.

“Having the season end the way it did sucks and is very upsetting, but it’s not in mine or anyone else’s control,” Revera said. “I’m going to use this down time to focus on aspects of training that I know I need to improve to make myself better for next season.”

RELATED: ‘I was at a loss for words’: 47 Sac State senior athletes to miss their final season

As far as expectations coach Miller has set for the team during this unexpected time off, Revera said it is all about staying prepared for next season.

“She expects us to hold ourselves accountable, to handle our business,” Revera said. “Training wise, the intensity is going to be different because coach doesn’t want to burn us out. It’s a learning process for her as well.”

Revera said if her and her teammates could take away one lesson from coach Miller, it would be the importance of working hard for what you want.

“Coming from high school, people are used to being the top dog but coming to college its not like that anymore,” Revera said. “You have to earn your spot here and that’s something coach has always taught us.”

Revera has been involved in sports since she was 3 years old and said she plans to keep sports in her future post graduation.

“Working with athletes and seeing them reach their full potential is something I would love to see, just like with my teammates,” Revera said.