STREAMING PICK OF THE WEEK: ‘Bad Education’ is already one of the year’s best films 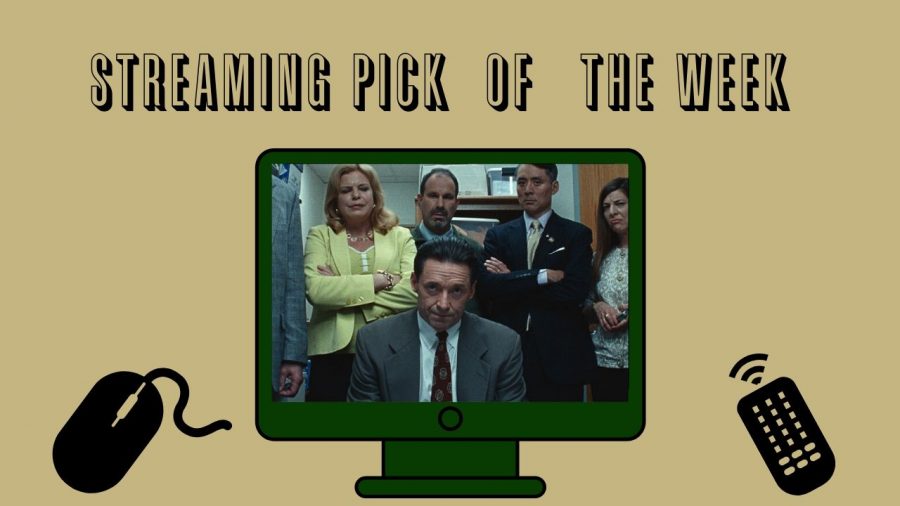 Every week, I’ll be recommending a film or television show currently available on certain streaming websites. New or old, it does not matter. I’ll recommend anything that I feel should be seen by many people.

When people do horrible things — like say, embezzle money —  they’ll try to find any way to justify their actions. “Bad Education” delves into how people will try to convince themselves and others that their horrible actions are for the better.

The film gives a darkly funny but dramatic look at the true story of corruption in a school district and how far people will go to keep a perfect image.

“Bad Education” follows Superintendent Frank Tassone (Hugh Jackman) who is beloved by everyone in his New York school district. One day, it is discovered that his assistant superintendent, Pam Gluckin (Allison Janney) has been embezzling money from the district. Tassone must decide what actions to take to keep the image he and the district have held on to. Even as he has his own secrets as well.

This is Cory Finley’s follow-up to his first film “Thoroughbreds,” which I loved and feel is overlooked. With “Bad Education” he shows that a sophomore slump won’t affect him.

His direction is stylized. The movie was shot on film which gives it a nice dark and grainy look that helps keep the film engaging but never detracts from the overall story and characters. Finley has only done two films, yet has already proven himself to be quite the talent.

He and writer Mike Makowsky follow a story of embezzlement and corruption on a smaller scale. This isn’t like “The Wolf of Wall Street” or “The Big Short,” where we get to see corruption happening at the top — here we get to see it with the people we’re around all the time. The administrators at schools may seem like they care about the future of their students, but they could be out for their own personal gain.

The story of those in power hiding the truth from us, all to keep a perfect image will always be relevant.

One of the best aspects of the film is the character Rachel, played by Geraldine Viswanathan. She’s a young reporter working for her high school newspaper whose story of new construction plans for the school has her digging deeper and discovering the money that has been taken.

At the end of the film, we see text that informs us that even though this story was covered by many top news outlets, it was Rachel’s high school newspaper that was the first to report it.

This shows not only the power of journalism, but what young journalists can do. They’re out there doing as much hard work as any professional journalist.

Every single actor here is giving some career-best work.

Hugh Jackman gives (in my opinion) the best performance of his career. Perfectly utilizing his own charm, Jackman creates a character who is both charming and slimy at the same time.

We can see why everyone in this district would love him. He’s a sweet guy who can remember the name of almost every student, even ones he taught years ago. Jackman uses his charisma to help us see why this guy was beloved.

Once more is revealed and we see what kind of secrets he hides and what he’ll do to keep up a great image, we see a different side of him. He becomes a manipulative person who comes off as a narcissist who thinks his actions are for the benefit of the students and faculty, but they’re really just so he can look good.

Jackman is able to perform both sides of this man perfectly. It really shows that when he plays around with his strengths, he’s great.

Allison Janney is also fantastic here. She’s even more unlikeable than Jackman, but Janney is so talented that you really want to follow her along. She puts her all into this role as someone who is pretty detestable and continues to show why she is such a beloved actor.

She doesn’t have as much screen time as Jackman, as she leaves the film for a while during the second half, but she leaves quite an impact.

I’ve also got to give a big shout-out to the fantastic score by Michael Abels. If you’re a fan of his work in “Get Out” and “Us,” you won’t be disappointed.

It is unfortunate that this film was put on HBO and not given a much wider release. It would have been great to see how it could have done, though given the closure of most theaters across the country, it may have been a blessing in disguise.

“Bad Education” is an absolutely riveting look at white-collar crime, led by an award worthy Jackman, that really sinks its teeth into how people will justify their worst actions.

You can currently stream the film with an HBO subscription, either with HBO Now, HBO Go, or as an add-on with Hulu or Amazon Prime.