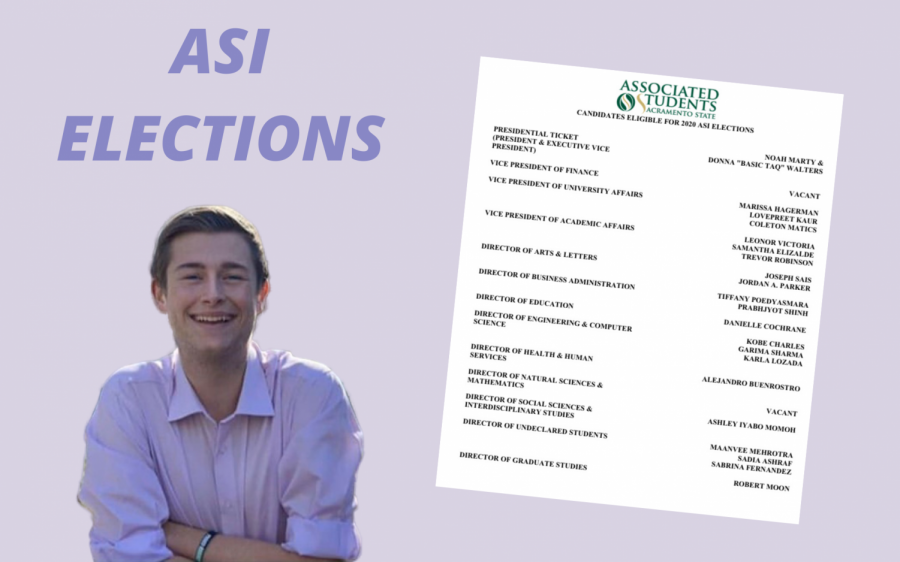 Sac State’s Associated Students Inc., Vice President of University Affairs Noah Marty is running for president uncontested. Marty and other candidates running for ASI board positions are using Instagram to connect to students and try to gain their votes.

The ASI elections will take place exclusively on the ASI website. Students can vote from Wednesday at 8:00 a.m. to Thursday at 7:30 p.m.

Due to social distancing restrictions, ASI candidates are not able to campaign on campus and connect with students face-to-face. Instead, they are campaigning through social media platforms such as Facebook and Instagram.

“It’s definitely a challenge,” Marty said. “We can’t put up signs on campus, we can’t put up posters, and I can’t go to every single club meeting on campus as possible and make a pitch as to why I am the best candidate for that position for their endorsement.”

Marty planned to run a campaign similar to his campaign last year, however this year he is using social media to gain recognition. Regardless of his campaign being uncontested, Marty said his campaigning is still vital for the student body’s understanding of his policies.

“I want to treat this like I would treat any campaign with any number of competitors,” Marty said.  “I generally want to run a good campaign because at the end of the day I still have to be elected. The students still have to vote me in so I have an obligation to run a full campaign and reach out to every student as possible.”

Marty is unsure why he is the only candidate running for president, but said the COVID-19 crisis is likely the reason. He hopes to increase participation in future ASI elections by collaborating with the ASI elections planning committee and ASI elections officers.

Leonor Victoria, candidate for vice president of academic affairs, is running her campaign through her Instagram page with a platform that strives for every student to have an equal opportunity to obtain a college degree.

Victoria utilizes her Instagram presence to exhibit her qualifications to be vice president of academic affairs by demonstrating her previous experience with clubs and organizations at Sac State. She said she hopes to show students who she is through her passions and interests, and hopes to demonstrate the tools and qualifications she has to represent Sac State.

Victoria said ASI has been supportive of candidates by providing a sheet with marketing and outreach tips for efficient online campaigning, notifying them when changes will be made to the elections and answering any questions that candidates might have.

Although ASI has provided their support, candidates such as Sadia Ashraf, who is running for director of undeclared students, face obstacles with using social media for their campaigns.

“Instagram thought I was a bot since I got too many followers in a short period of time,” Ashraf said after they banned and locked her out of her account, @voteforsadia, for a week.

She said reaching out to students was already difficult, but things got worse when hateful comments and inappropriate messages came through.

“I got a few comments saying something along the lines of ‘not going to follow or vote for you’ and some were inappropriate like they were hitting on me, and I thought that the Hornet community would be better than that,” Ashraf said.

She ultimately blocked the accounts and said the positive comments she received from others allowed her to continue with her campaign.

“I guess when everything is online and people are behind a screen it’s easier to be mean. Especially with the whole campaign moving online, I think it just exacerbated the whole situation,” Ashraf said.

Ashraf did not receive ASI funding for her campaign and said she takes part of the blame because she did not fill out the application on time to receive any funds, at first deeming it unnecessary since Instagram is free to use.

“The only way I could post was if I bought Instagram ads which cost a lot of money, and my family is already having a really hard time financially,” Ashraf said.

Ashraf said she contacted ASI during this period to see if they could be lenient and flexible with the ASI election grant but she was denied.

“I understand that it is my fault, but because of these unprecedented times they need to support the candidates running for these positions,” Ashraf said.

Ashraf continues her campaign on Instagram, paying for an upgrade on posts to be advertised, but said she wishes ASI was more flexible with the funding due to the lockdown circumstances.

“Working online to promote ourselves is a bit challenging for me because I never ask people random questions on Instagram using a poll or posting pictures of myself,” Kaur said. “These things are the opposite of who I am because talking to people online is hard for me.”

Kaur said that although you can reach a lot of Sac State students through social media platforms, it is difficult to persuade them to vote through an online campaign compared to face-to-face interaction.

Profiles of the candidates on the ASI website give further detail on the issues candidates look to focus on if elected.

“ASI is helping candidates by posting about them on the ASI official website, where students can learn about their candidates and make an accurate decision about their vote,” Kaur said.