Sac State to hold virtual commencement for class of 2020

Graduates will be able to walk in spring 2021 ceremony 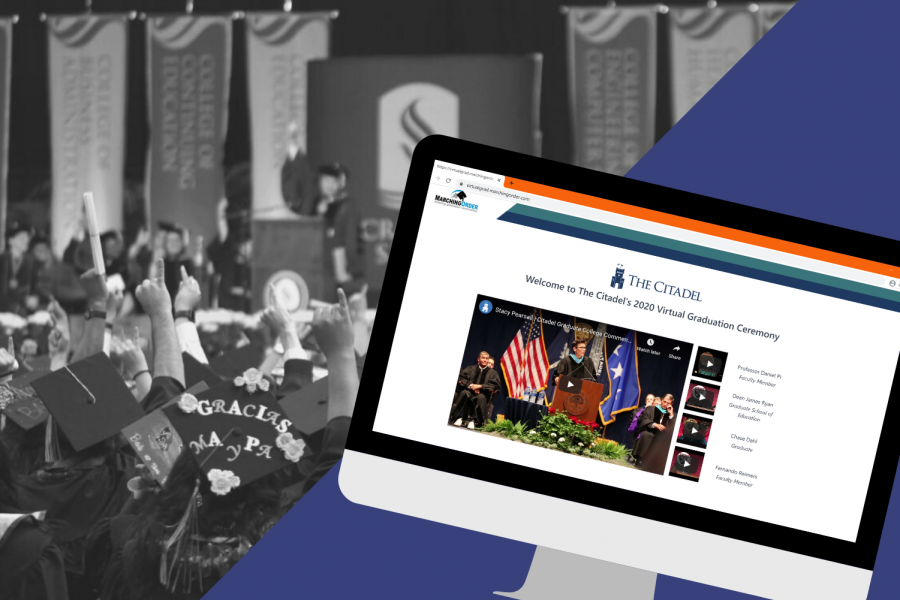 Instead of an in-person gathering, Sac State will hold an online ceremony for the class of 2020. The computer screenshot is a sample from MarchingOrder, a graduation ceremony company, presented by Cely Smart, Sac State’s chief of staff for the president’s office, at the April 9 Faculty Senate Zoom meeting.

Sacramento State will hold a virtual graduation celebration for the graduating class of 2020, according to a SacSend email sent by Sac State President Robert Nelsen on Thursday.

Graduates will be able to walk with the class of 2021 in their ceremony next May in addition to participating in the virtual ceremony, if they choose.

The virtual graduation will be available on Sac State’s commencement website on June 6.

Sac State has made no decision on what will happen to the $76.50 commencement fee paid by each graduating senior, according to Cely Smart, Sac State’s chief of staff for the president’s office.

“Honestly, we have been working on this for a little over a week, and we have not sat down to talk about any opportunities regarding the commencement fee,” Smart said.

Sac State has not responded to further requests for comment.

The decision of virtual commencement was made in accordance with the California State University Chancellor’s Office and state and local public health agencies and officials in an effort to stop the spread of COVID-19, the disease caused by the recent coronavirus outbreak, Nelsen said in the email.

“The choices we are facing right now feel impossible, and in many cases, we simply do not have a choice in the matter,” Nelsen said.

Nelsen said Sac State had looked at dates during or immediately after the fall semester, but due to prior bookings neither Hornet Stadium or Golden 1 Center were available. He added that weather makes the use of the stadium for a multi-day event impractical in winter.

Hello I’m reporting live for @TheStateHornet on @SacStateASI board meeting on Zoom. This meeting includes a presentation on virtual commencement with @sacstate student feedback.

Gov. Gavin Newsom announced that large gatherings will likely remain banned until a COVID-19 vaccine is developed, according to Nelsen. Nelsen said he remains optimistic that the vaccine will be available next year.

Nelsen stated that models of the potential ongoing risk of the virus spreading involved with large public gatherings was also regarded.

“We hope that we can come together virtually to honor the class of 2020,” Nelsen said.

Sac State students who attended the ASI board meeting provided suggestions and concerns in public comment after hearing Smart’s presentation.

“It was kind of frustrating, just the idea of having a virtual graduation, just because you know you’re graduating this year you are looking forward to walking across the stage; it means so much, not only to myself but to the people in my life,” said Sac State sociology major KaBria Payden. “However, after listening to what everyone has to say, I definitely understand how this decision came about.”

Begley said adding a virtual commencement is beneficial to international and out-of-state students, as well as students who will not be able to attend because of future obligations.

“You are going to have students who might not be able to [attend] because of the next phase of their life, or their job, whatever it might be, doesn’t allow them to come back to Sacramento or to be able to attend their graduation,” Begley said. “I think having a virtual component is very useful.”

Jessica Guzman, a psychology major, suggested that the class of 2021 be provided their own section in the commencement ceremony in May.

“We kind of went through the pandemic as a class, and I think we should have a differentiation between the class of 2021,” Guzman said.

Students responded to the announcement on Twitter with opinions on the decision.

Yeah but till next may ? That is ridiculous some people will be leaving. This doesn’t sit right with me. We deserve a commencement as soon as all of this is over.

Anthony Poindexter, a criminal justice major, said that while he does not wish to downplay the effects of COVID-19, he feels Sac State prematurely made the decision to hold a virtual commencement.

“I can’t help but feel like they didn’t weigh out all of their options and saw the decision to go virtual as an easier way to deal with the situation,” Poindexter said in a direct message. He suggested reducing the amount of tickets given to people or holding a ceremony in July or August.

Poindexter said that the virtual commencement does not intrigue him, therefore he will not be participating in it.

Sac State alumna Noelle Guidotti, a sociology major who graduated in the fall of 2019, was set to walk with the class of 2020 in the commencement ceremony.

“I already had to wait six months for this graduation. Who knows where I will be at in another year?” Guidotti said in a direct message. “Perhaps a new job in a different state or city to where I can’t attend a graduation in a year.”

Guidotti said she wishes that Sac State made a different decision.

“The class of 2020 (and fall 2019) deserve for their achievements to have its own special day with the pomp and circumstance that comes with it,” Guidotti said. “It’s a sense of pride for a lot of people being able to go across that stage, shake hands and celebrate this big moment.”

This story has been updated with information regarding the commencement fee.

This story has been updated with student opinions on the virtual commencement.