‘It is a completely different dynamic’: Sac State athlete describes transition from baseball to softball player 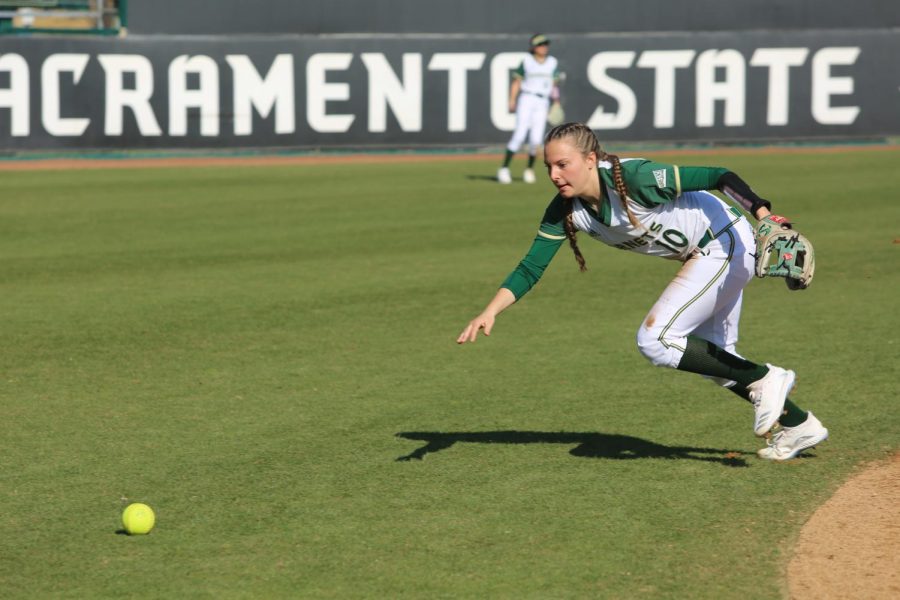 Sac State sophomore shortstop Shea Graves runs for a ball against California Baptist at Shea Stadium on Friday, Feb. 7. Graves ranks among the top five in the Big Sky for batting average and hits.

Sophomore shortstop Shea Graves’ love for sports started at a young age, but it wasn’t softball that first peaked her interest.

Instead, she took a more nontraditional path to college softball.

“I played baseball until high school,” Graves said. “I enjoyed playing with boys and they were willing to go to bat for me.”

Graves played baseball starting around 6 years old, growing up alongside her twin brother Devan Graves. She was the only girl on the field.

She was nicknamed “Ponytail” growing up as her ponytail was always sticking out the back of her hat or helmet. But, Devan remembers that she was well-known as a “baller.” Devan said she would play remarkably in every position on the field, whether it be an infielder, outfielder or even a pitcher.

In high school, Graves transitioned to softball. Her dad believed it would give her a better opportunity to get into college, Graves said. Even so, her change of plans was a surprise to the family.

“When she made the switch to softball, before that, [if] we would mention softball, she would sock us in the arm,” Devan said. “She was not having any of it. She was going to be a baseball player and that was it.”

The percentage for female players in high school baseball is never above 1% according to a survey from the National Federation of State High School Association.

For Graves, being part of the softball team at Sac State has been a decision she said she sees as her greatest accomplishment. Graves said she wasn’t sure about playing college ball for a while, until her travel ball coach gave her the confidence and push that she needed.

The transition from baseball to softball for Graves showed no difference in her performance.

“It is a completely different dynamic,” Graves said.

However, her brother perceived a different perspective on how she was treated on the field growing up. Devan described the most common comment he heard from the boys was, “you got struck out by a girl.”

“Boys felt animosity toward her,” he said. “There was a sense of displeasure and disbelief and to see the way she performs under that kind of pressure with everybody on the field against her other than her own, is incredible. But that is the woman that she is and she always performs under pressure.”

Graves said that playing against boys has prepared her to play under pressure and said she enjoys the pressure, especially in games.

At the beginning of the season, she ranked in the top five players in the Big Sky in batting average, hits, slugging percentage and total bases.

A great hit from sophomore Shea Graves and @SacStSoftball still on the lead and ends fifth inning 5-0 over Cal Baptist. @SH_Sports. @TheStateHornet pic.twitter.com/J1q7DptX3f

Her .313 batting average reflected her strong performance on the field, but Graves shines in the classroom as well. The team’s overall GPA never lowers below a 3.0.

Roommate and teammate Alondra Mejia describes her as a “go getter” and said her strength shows in every game.

“She is very trustworthy and very successful on and off the field with school or anything she sets her mind to,” Mejia said. “She pushes herself to be her best possible version.”

But, Graves admitted that she struggles with her mental game.

“Sometimes I’m not doing very well and I let it get to my head,” Graves said.

Graves said she works to improve her performance every day, and her teammates and coach have noticed her efforts.

“Shea is extremely competitive and she wants to compete at a high level every day,” coach Lori Perez said. “The great thing about her is she has had success, but she has only been working harder on her game, which is an awesome sign.”

Unfortunately for Graves and the Hornets, the Sac State Athletics Department canceled spring sports for the remainder of the academic year due to the COVID-19 pandemic. Although, Graves said she is making the best out of the situation by keeping up with workouts.

After the NCAA’s announced eligibility relief for the athletes impacted by the cancellations, Graves shared her relief for another opportunity, especially for the seniors.

“The highlight of the season is what kind of team we have and what we are going to have,” she said, “We improved what we can do as a team and it’s exciting to actually do it.”