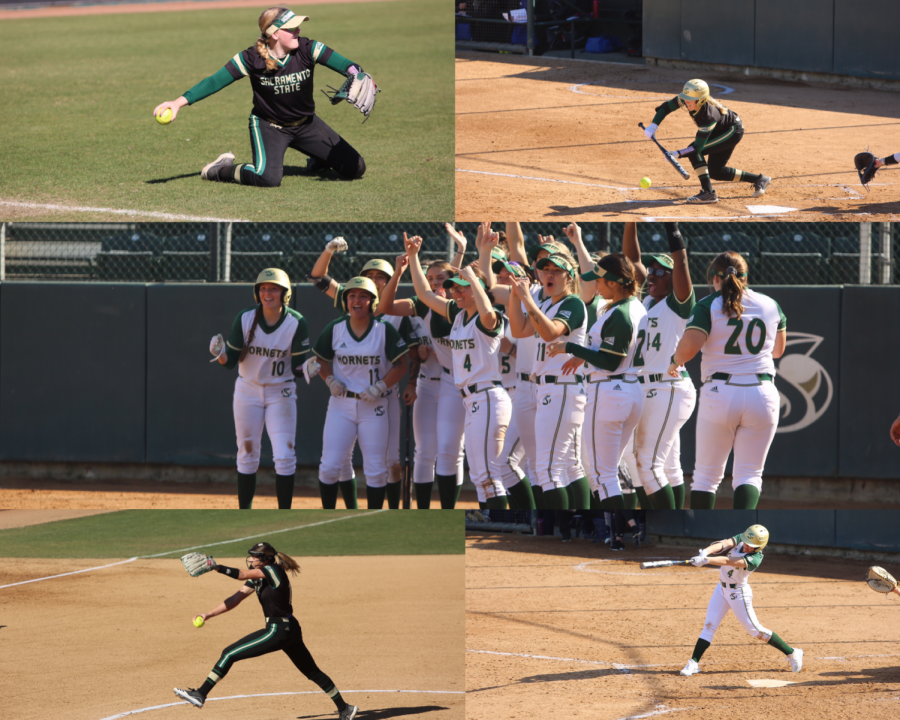 The Sac State softball team ended their season with a 14-11-1 record before its cancellation amid COVID-19 concerns. The Hornets were just a few days away from beginning conference play when the Athletics Department announced the cancellations.

The Sacramento State softball team played 26 games, ending with a 14-11-1 record before the cancellation of the season by the Sac State Athletics Department due to the COVID-19 pandemic.

The following are few mentionable highlights of the season.

Team begins the season with a 4-1 record

The Hornets’ only defeat was to Santa Clara University in a 7-4 loss.

During the game against Cal Baptist, senior catcher Jessica Scott hit her first home run of her collegiate career to give the team an early lead.

However, Scott mentioned that her biggest takeaway from the season was the connection between herself and her teammates.

Scott and the team acknowledged some results weren’t what they expected, but knew they could count on one another.

“What I think of the season and take back is the connection that we had,” Scott said. “We were (at Loyola Marymount) and were probably all stressed on the field, but had a cool bus driver that let us play our music. We were singing and getting our head in the right place and flushing out of the negativity. We were able to reconnect during that 15 minute ride back to the hotel and were reminded we are all here as a family.”

Team shows resilience with comebacks throughout the season

There were many moments when the team was down on the scoreboard, but managed to tie the game and come back for a slim victory.

A dramatic ending in the Golden Classic Tournament came against Army West Point on Feb. 16. Both teams were scoreless until the fifth inning. The Hornets opened the scoreboard with one run, but Army responded with three runs in the top of the sixth inning.

Sac State rebounded and tied the game at three runs a piece in the bottom of the sixth. After seven, both teams were locked at three, leading to extra innings. Freshman outfielder Haley Hanson gave the Hornets the 4-3 victory from an RBI-single in the ninth inning.

In the Capital Classic Tournament during the weekend of Feb. 28, the Hornets took down Santa Clara in a dramatic victory by once again heading to extra innings. After a small Broncos rally, the Hornets headed into the bottom of the seventh down by one run.

With no base runners and two outs, freshman third baseman Lewa Day hit an inside-the-park home run to tie the game 4-4 in the bottom of the seventh inning. A Broncos’ error gave the Hornets a 5-4 victory in the eighth inning.

The only game for Saturday during the Capital Classic tournament was stopped in the top of the ninth inning against Saint Mary’s College due to darkness.

The Gaels took on a fear-reaching 6-0 lead into the sixth inning. The Hornets scored four runs to cut the deficit to 6-4. During the top of the seventh, Saint Mary’s added two more runs. However, the Hornets weren’t finished either as they scored four more times to tie the game.

The score remained tied at 8-8 after seven full innings. In the eighth, the game was halted due to darkness. The game was to be postponed until a later date before the cancellation of the season.

Day said the scenery of the crowd screaming and the team’s loud cheers in the dugout was a highlight.

Despite her grand slam, Day said her favorite moment was her inside-the-park home run to tie the game 4-4 in the bottom of the seventh inning during the Classic Capital tournament.

“My favorite moment was my in-the-park home run because we were down by one and (there were) two outs,” Day said. “The wind carried it so much that my coach was sending me home. I was rounding third and went for the slide and I made it to home.”

The team took down rival University of California, Davis in both meetings on Feb. 26 and March 1. The first game at Shea Stadium ended with a close score of 4-3. In the second game, UC Davis scored once for a final score of 4-1.

In the second game, freshman Marissa Bertuccio allowed just one run and five hits in seven innings and Day added her fifth home run of the season.

The pitching staff dominates the circle

During the Capital Classic tournament, Bertuccio struck out five straight batters combining for 12 strikeouts and only three hits through six innings. Her ending average ERA is 1.88 with 63 innings pitched for the season.

On the NorCal Kickoff against Cal Baptist, senior pitcher Jensen Main dominated in the circle and commended her team for their intensity and engagement. Main ended the season with a 2.75 ERA, the fifth best mark in the Big Sky, for 13 games.

Senior Danielle Sperry had 11 appearances, including four starts and ended with a 4.10 ERA. Sperry recorded nine strikeouts in 29 innings pitched.

The combined ERA of the pitchers Bertuccio, Main, Sperry, sophomore Alyssa Nuñez and Carley Morfey was 2.81.

Just a day before the team was set to travel to Fullerton to compete in the Easton Invitational, the Big West Conference and the Big Sky Conference announced the indefinite suspensions of all competition. Less than a week later, the Sac State athletics department announced the cancellation of all sports through the end of the academic year.

“It’s a mix of things and we were close to conference, right where we wanted to be,” Perez said. “There is a lot of heartbreak in knowing that we will never know how this particular group was going to finish the season.”

The NCCA announced that they would offer eligibility relief to spring sports athletes whose seasons were impacted by COVID-19 cancellations. The universities will have to decide the aid offered to each player.

“It is absolutely heartbreaking,” Scott said. “It’s something I didn’t expect, especially for my senior year and other seniors experiencing this. That is now an option for all seniors and every player affected by all of this (COVID-19 pandemic).”

Perez said she knows the team is resilient and will continue to work on their school work and, on top of that, be as physically active as possible.