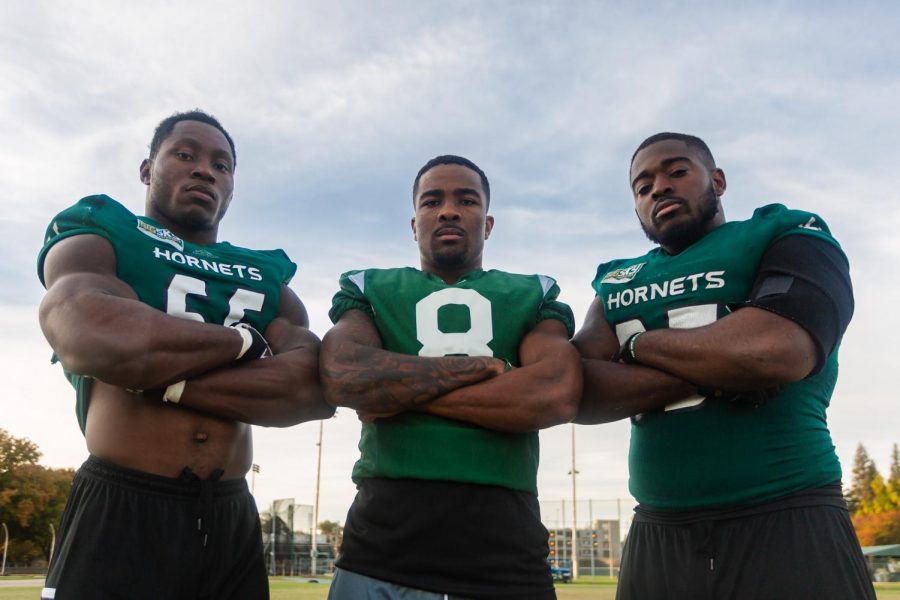 From left to right, Sac State senior football players, defensive lineman George Obinna, defensive back Caelan Barnes and defensive lineman Dariyn Choates pose for a photo after practice. Obinna signed with the Cleveland Browns as a free agent Saturday after going undrafted in the 2020 NFL Draft.

Another Sacramento State football player has made it to football’s promise land.

Defensive lineman George Obinna, who holds the school’s single season and career sack record, signed with the Cleveland Browns as a free agent Saturday after going undrafted in the 2020 NFL Draft.

Obinna made the announcement via Twitter shortly following the draft’s conclusion with the caption “more work to come.”

Obinna said that signing for an NFL team has not settled in yet, but feels lucky and fortunate to have made it this far.

“I feel like I just got lucky that they saw something in me,” Obinna said via direct message on Twitter. “It doesn’t quite feel real. I feel like it was kinda always meant to happen though.”

Other recent Sac State grads to sign professional football contracts include defensive back Mister Harriel who signed with the BC Lions of the Canadian Football League and Andre Lindsey who was briefly with the Kansas City Chiefs.

Obinna came to Sac State in 2014 from Tracy High School and recorded 136 tackles, 33.5 sacks, 47 tackles for loss and recovered three fumbles. He also helped the team reach its first ever FCS playoff berth in 2019.