EDITORIAL: Give us back our damn money, Sac State

We need refunds, not virtual workout classes we won’t use 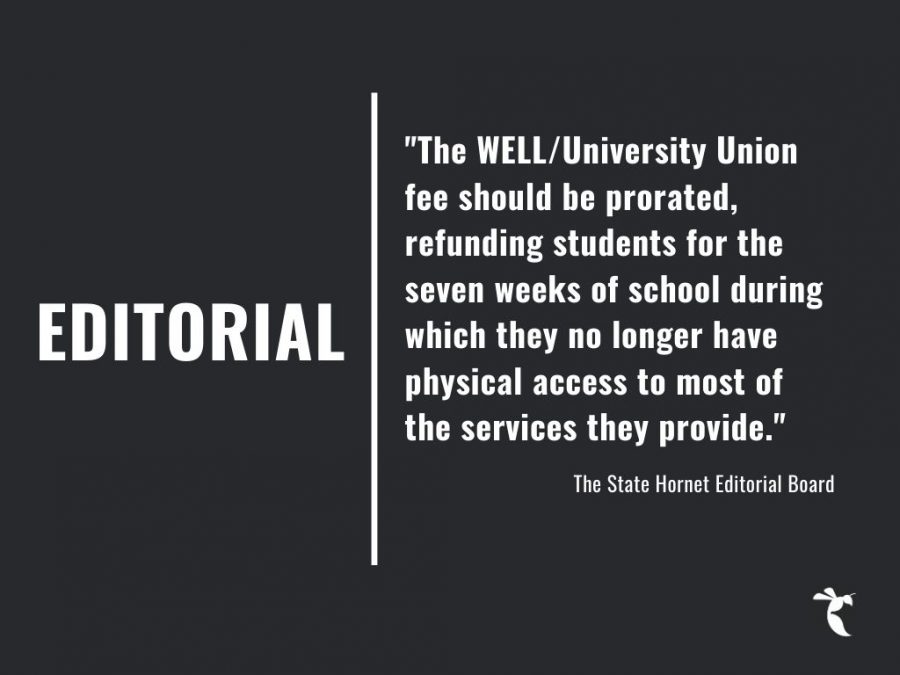 On Wednesday, The WELL at Sacramento State dug its heels into anti-student ground, reiterating what we already knew — there will be no refund of the $393 University Union/WELL Fee that over 30,000 students paid.

In their “COVID-19 Updates” Instagram post, The WELL said that the California State University system determined the fee falls under the category of mandatory university fees that will not be refunded, citing CSU interim policy guidelines that “recognize that the essential functions at a university should not be financially jeopardized.”

Most of the comments on the post expressed outrage. Outrage coming from students who, coincidentally, are actually being “financially jeopardized” due to the COVID-19 outbreak.

COVID-19 updates as of April 8, 2020. . We remain committed to serving the students and our campus community during this time and understand that opportunities for exercise and recreation is critical to physical and mental health, especially reducing stress and keeping the immune system strong. It has always been a part of our practices to connect students to all Sac State resources that keep you on track to persisting at Sac State and graduating. We will continue to be a campus resource advocate as all of our campus partners are currently focusing on student success through this difficult time. #sacstate #hornetstrong

Nearly two weeks ago, The WELL started processing partial refunds for faculty, staff, alumni and sponsored members, according to an email obtained by The State Hornet.

So, Sac State is offering refunds for that percentage of WELL members. They’re deciding to only refund the portion of the population who actually chose to pay for their memberships, effectively leaving students who had no other choice but to pay the fee tacked onto their tuition in the dust.

WELL memberships are open to the community, with discounts available for faculty, staff and alumni, all of whom are statistically likely to be making a higher wage than most students.

The WELL at our university has a dual purpose — it serves both as a recreational area, with all kinds of exercise and sporting opportunities, and as a center for student health, both physical and mental. Its purpose is great, when the center is actually open to students. Same goes for the University Union.

We get the student health mission and appreciate it. We like having access to low cost over-the-counter medication and urgent care, which are both thankfully still available.

We also like access to sexual health appointments, except we can’t make an appointment for an STD test until May, a month from now.

In fact, nearly no primary care or sexual health appointment slots are available until May, not that this is anything new.

And while difficulty scheduling is often the norm (not a good one), The Well has reduced its hours for both urgent care and primary care appointments. Instead of closing at 6 p.m., services now close at 4:30 p.m. — effectively blocking off students who are essential workers and need later appointments.

As far as the recreation center goes, virtual exercise classes, carbon copies of which you could likely find on YouTube for free, do not substitute for use of the multi-million dollar facility that students paid (and are still paying) for.

According to The WELL’s website, the fee goes toward both ongoing bond payments for the physical buildings, as well as operational costs and staffing.

The bond payments we can’t do much about. But to hide behind paying your part-time staff (students) when they won’t even be paid through the rest of the semester is despicable.

“It is crucial to maintain both facilities so they are immediately ready for use when the campus returns to normal operations,” reads The WELL’s FAQ explaining to students what this mandatory fee is used toward.

Hold up, Sac State. Why do you keep saying both facilities need to be maintained for “normal campus operations” when that probably won’t come until as early as fall?

It feels like university administrators are doing everything they can to postpone every decision they know they should be making. Every decision that students are basically begging for in a time of crisis.

We still don’t know whether students will be charged the customary University Union/WELL fee during the summer semester, during which classes will be fully online.

University Transportation and Parking Services initially only gave students a single day to return their parking permits for a 50% refund after the announcement of the transition to virtual classes, despite Sac State’s parking refunds information page outlining students could receive that refund up to a week later. It wasn’t until after one of our reporters started asking questions about the discrepancy that the deadline was officially extended.

We’re tired of Sac State cowering behind the CSU system and ultimately failing to support the Hornet family it claims to cherish and miss so dearly.

We’re tired of being told that CSU Chancellor Timothy White — who made close to half a million dollars in 2018 and whose system is sitting on a $1.5 billion surplus  — can’t find some way to refund students for services they are no longer using. At the very least, The WELL/University Union fee should be prorated, refunding students for the seven weeks of school during which they no longer have physical access to most of the services they provide.

According to the Auditor of the State of California, who called out the surplus in the first place, that $1.5 billion came primarily from tuition, the very same money paid by the students who are struggling today.

The same tuition money that will continue to be paid by many in the form of loans for years to come.

Of course we need community during this time. Of course this is a hard time for everyone. But this mantra is disingenuous when it comes from the mouths of those that live comfortably — from those for whom a month of unemployment doesn’t mean the difference between eating and starving.

Thank you for giving us nothing we want, Sac State — at least that’s normal, no matter what times we’re living in.