University of Pacific no match for Sac State baseball team 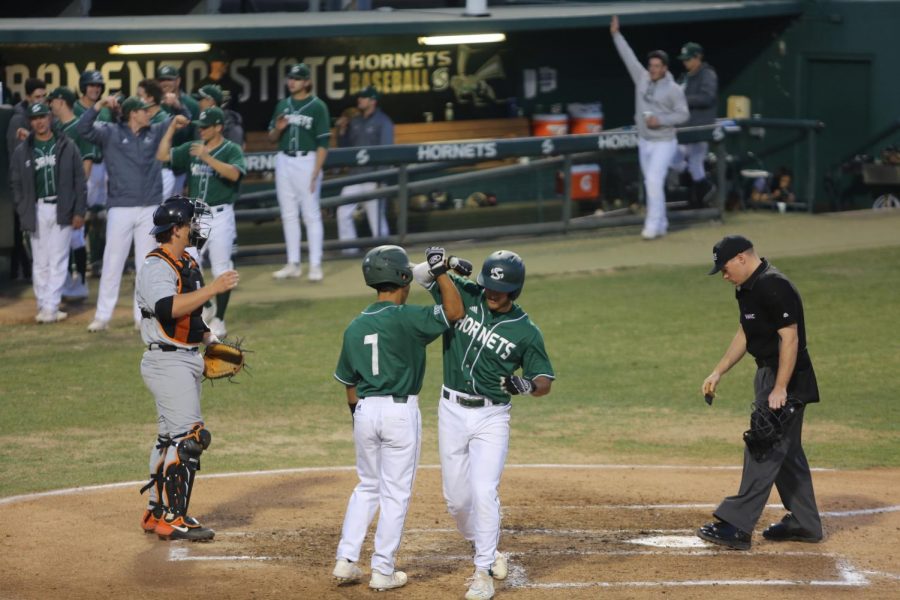 In the final game of a 12-game homestand to begin the year, the Sacramento State baseball team obliterated the University of Pacific Tigers 9-2.

The Hornets (8-4) hit three home runs in the first four innings to take a commanding lead early against the Tigers (7-6).

In their last series, the Hornets split a four-game set with Santa Clara University over the weekend.

On Tuesday night, Sac State scored first in the bottom of the second inning on a two-run home run to center field from freshman utility Hunter Dorraugh. The homer was not only Dorraugh’s first collegiate home run, but also his first hit.

“I think we were really aggressive early,” Dorraugh said. “We were really hunting fastballs. I think we had a good approach going in. We had worked on it throughout (batting practice) and stuff like that. UOP has a good (pitching) staff but we were just out ready to hit today.”

The Hornets put the game away in the third inning. Senior infielder Ryan Walstad singled to center field to increase the lead to 3-0. Then, junior catcher Dawsen Bacho stepped up to the plate with two runners on base and crushed a three-run bomb to center field, giving Sac State a commanding 6-0 lead.

The third and final home run of the night for the Hornets came in the next inning from infielder Jorge Bojorquez. The freshman hit his second homer of the season with a two-run shot in the fourth inning. Sac State scored their final run in the fifth inning on a fielder’s choice groundout from sophomore outfielder Trevor Doyle to score Bacho.

“I think our team did a good job pitching-wise attacking the zone,” said freshman pitcher Eli Saul. “Getting hitters out early in counts. (Our) hitters obviously did a great job. They made the opposing pitchers pay for their mistakes. I think it was just an overall good team win.”

Saul got his first collegiate start for the Hornets in the midweek matchup. The right-hander tossed three scoreless innings, allowing two hits with four strikeouts.

“I thought I did pretty good,” Saul said. “It’s my first college start. So there’s a little bit of nerves coming in, but I settled in and it was a lot of fun out there.”

Coach Reggie Christiansen sent out five pitchers over the final six innings in relief of Saul.

“I thought those guys did a nice job as well,” Christiansen said. “And Brady (Rodriguez) hasn’t pitched since last Friday. It was important to get him back out there tonight going into the weekend.”

The Hornets will now be on the road for 12 straight games before returning to The John on March 25. Sac State begins the season-long road trip this weekend with a three-game series against the University of California, Irvine.

“I think we’re just really excited to get after it,” Dorraugh said. “Go put the name out there, keep Sacramento going. I think we’re gonna have the same mindset we do here (at The John), you know, play our game and don’t play anybody else’s. Play how we play and do what we do.”

“I think they’re excited to get on the road and get a chance to go play someone else in somebody else’s ballpark,” Christiansen said. “They have one of the top pitchers in the country that will go for them on Friday. So it’ll be a good test for us.”