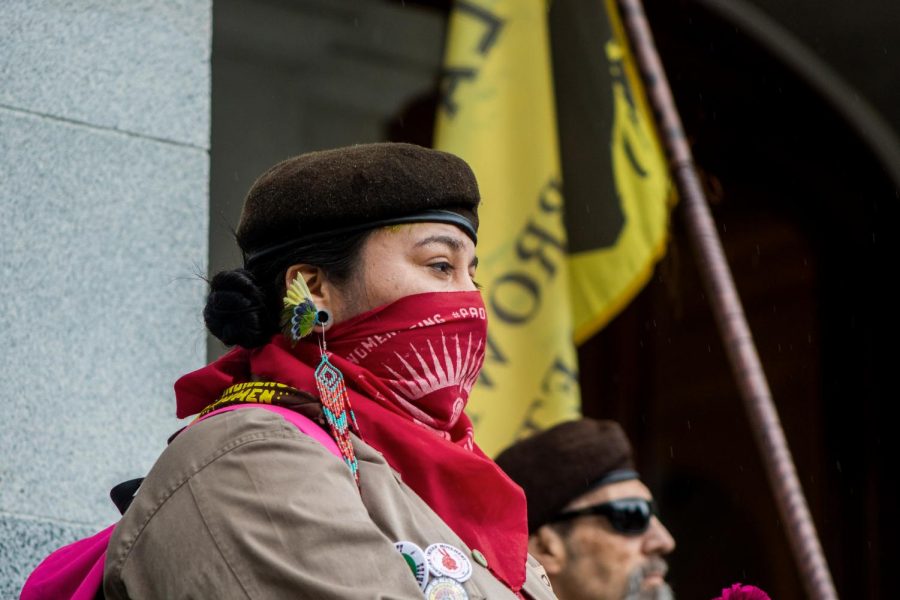 A member of the National Brown Berets stands on the North Steps of the State Capitol on Saturday, March 7, as she listens to speaker Josie Morales talk about the struggles of the women from the East Los Angeles societal chain.

The rally focused on advocating for women’s rights worldwide while simultaneously emphasizing violence against Indigenous women in America.

The event highlighted missing and murdered Indigenous women by placing a teepee with white hand marks and red dresses and shoes representing the women in their community that have been sexually assaulted.

There is a set up at the Sacramento’s International Women’s Day Rally of a teepee and red dresses that represent the missing and murdered indigenous women in the U.S. @TheStateHornet pic.twitter.com/lPvSBB7P0W

The organization Missing and Murdered Indigenous Women led a demonstration by chanting “The Rapist is You,” a Chilean feminist anthem in solidarity of their “missing sisters,” according to Sister Walks With Bears, a Miwok spiritual leader.

“The oppressive state is a macho rapist,” chanted a group of women part of the organization Missing and Murdered Indigenous Women at the Sacramento’s International Women’s Day rally at the Sacramento Capitol building. @TheStateHornet pic.twitter.com/mQcygzKILm

The rally included many speakers who spoke for certain organizations and activist groups like Boycott Driscoll’s, the Brown Berets, Labor Council for Latin American Advancement and Party for Socialism and Liberation.

“Women who have lived under curfews, blackouts and raids but have always emerged stronger, to these women I want to say that we see you and we hear you. No internet blackout no matter how long will stifle your voice,” Mir said.

Delphine Brody, a representative for the Trans & Nonbinary Housing Collective, spoke on Black and brown trans women who are discriminated against in housing.

“The housing discrimination and the violence that trans people face is brown pinned. We are going to see an unprecedented wave of pain,” Brody said.

“I think sometimes women of color are left to the side and not acknowledged,” said Alejandra Benites, 21, Liberal Studies major. @TheStateHornet pic.twitter.com/9ND8gCJS72

Julia Mariano a 21-year-old political science major came to the rally with the #Fight4er campaign to help educate people on the importance of  advocating for reproductive rights.

“We are basically here to fight for women’s reproductive rights on International Women’s Day,” said Mariano. “Our whole mission for the campaign is to stop Trump’s global gag rule which is ending funding for reproductive health care for women and also men and also all genders.”

Mariano said the International Women’s Day rally is different from the Women’s March because it focuses on women around the world, not just the U.S.

“Globally, we tend to neglect the idea that we aren’t the world,” Mariano said. “There are other systems that discriminate against other minority groups and other gendered groups. We are fighting for every woman. Without us, there would be no globe.”

Timothy Williams Shuman, a business marketing major, said he came to the rally in support of the women who have greatly impacted his life.

“A lot of my friends are women. I was raised by two women and I think it is important to show up here and like be here for the cause,” Shuman said.

Shuman said he wanted to learn more about the issues surrounding equal pay, as it has affected his family life.

“I think women’s equal pay is extremely important like I was saying being raised by two moms on one side like I’ve definitely seen a pay difference between them and their coworkers,” Shuman said.

Deion Seruelo, a political science major, attended the rally with the Party for Socialism and Liberation to stand in solidarity with women who experience violence.

“Often in these displays of solidarity with women we sometimes forget about the violence that is exacted onto Indigenous women, Black women, trans women, you know? So we as the Party for Socialism and Liberation want to make sure we uplift those struggles,” said Seruelo.

Thavie Keary, a graphic design major, said education on women’s bodies is important for all students to be informed on.

“Being able to be educated on sexual and reproductive health and things on that vein, it is a very important thing for women or vagina havers across the world,” said Keary.

“The raid of sexual assaults of women in college campuses are extremely high and a lot of administrations just let it go but if we had the backing of our community if we show up for each other then the likelihood of those things happening it will be reduced,” Seruelo said.

Shuman encourages students to attend events that advocate for rights to create change because it is a generational responsibility to be activists.

“I have a lot of homework today and it’s like a rainy day but I feel like it would be nice to see more Sac State students showing up here to support that. We are college students, it is our age and generation that need to be activists and show up to these kinds of events,” Shuman said.