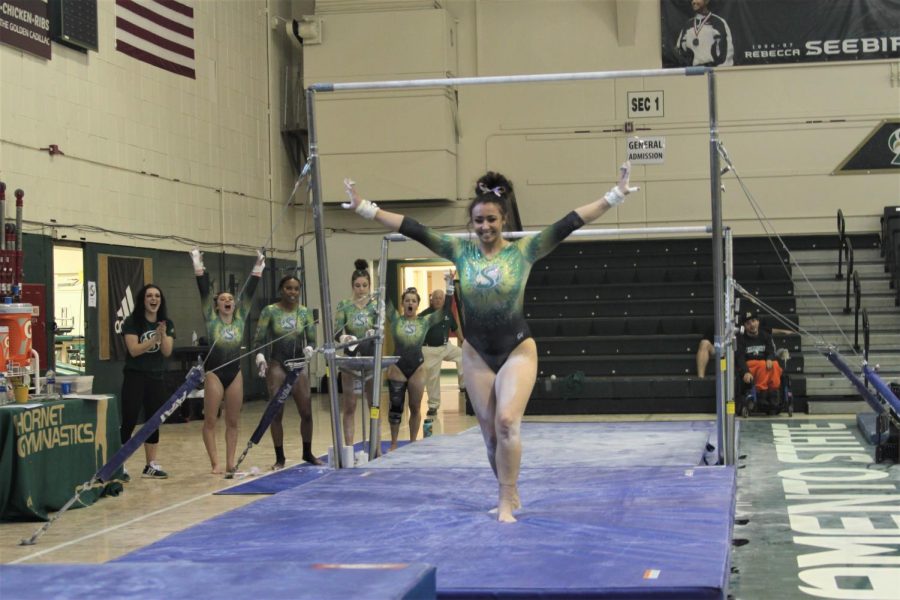 Sac State sophomore Amber Koeth strikes a pose after finishing her routine on the bars Friday, Feb. 28 as her teammates cheer her on in the background at the Nest. The team hopes to place higher at MPSF Championships after placing fifth last season.

The team hit the season high score at the Nest against San Jose State with a 194.225.

Coach Randy Solorio noted that a performance such as the one that they posted Friday was something the team has been working toward all season.

“We have been moving forward all year with this in mind,” Solorio said. “Knowing that we have a young team and they’re learning and coming into the season, we were going to be very competitive going into our last few meets.”

The team started their season Jan. 5 and their team scores have gotten consistently better for the most part, as the season has progressed.

Senior Tara Catour said that when it comes to their team goals, they try to improve off of each past performance.

“At this point I think it’s just to try our best and leave it out on the floor because at this point we’re just trying to improve meet by meet,” Catour said.

Junior Jordyn Brent said they aren’t too worried about what the opposing team does, rather they just try to focus on their performance.

Looking at where the team is currently and where they were at this point last year, both Catour and Brent see plenty of improvement and also better health.

Last season, both Catour and Brent were injured with Brent needing wrist surgery after the season and Catour dealing with a concussion which limited her to competing in only four meets.

Brent noted that due to injuries last season, they were only able to field a starting lineup of five gymnasts for events rather than the normal lineup of six. Due to the lack of depth at last year’s MPSF Championships, Brent said, they placed fifth.

The team has seen one first-place finish this season in a dual meet with Alaska Anchorage on Feb. 16. Catour, Brent and junior Courtnee Marquez each claimed individual titles to help lead the Hornets to victory.

As far as the team outlook when it comes to this year’s MPSF Championships, the squad is optimistic and looking forward to the chance to do better.

“I think we’ll definitely improve,” Brent said. “We have more depth this year so I feel it will be better. We have more options and people to pick from.”

Sac State has won the MPSF Championships five times with their last win coming in the 2016 season. Catour arrived at Sac State in 2017 and said she felt closer to the team this year than in the years prior.

”This is just an amazing group of girls to be with,” Catour said. “I feel like our chemistry this year, just like all being together and being there for each other is better than the years in the past. I feel like we are all on the same page and it’s easy to get along with everyone. We just click.”

The team has two more meets remaining before they get to the MPSF Championships.

One of the meets takes place Saturday, which will be Senior Night for the team. After, the team will head to San Jose State on March 15 for their final meet of the regular season.