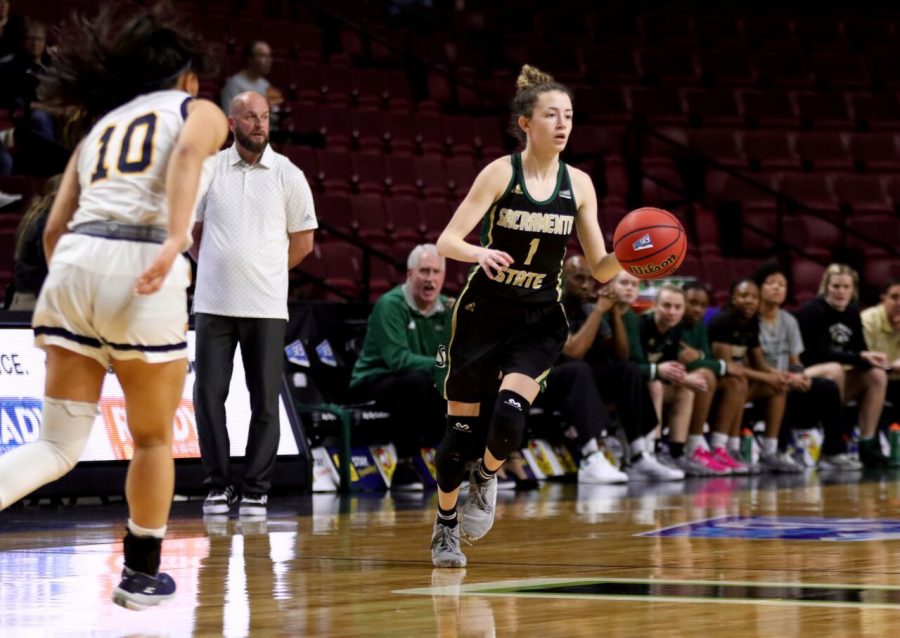 Sac State sophomore point guard Milee Enger dribbles the ball up court against Northern Colorado on Monday, March 9 at CenturyLink Arena. The Hornets' season came to an end with a 79-61 loss to the Bears.

For the fourth year in a row, the Sacramento State women’s basketball team’s season ended with a first-round exit in the Big Sky Tournament.

The Hornets (8-22, 6-14 Big Sky) came into the tournament as the ninth seed to play the University of Northern Colorado (13-17, 9-11), who was the eighth seed. The top five seeds in the conference earned a first-round bye into the quarterfinals of the tournament.

Sac State never led against the Bears, losing in wire-to-wire fashion 79-61. The Hornets played without two of three seniors due to injuries, as forward Kennedy Nicholas and guard Camariah King traveled with the team, but did not suit up. Nicholas was named second team All-Big Sky on Monday morning despite only playing 20 games this season.

“Each of our three seniors have spent as much time on the injured reserve this year as they have playing,” coach Bunky Harkleroad said in a postgame press conference. “We were uncertain if Gabi (Bade) was going to even be able to play her Senior Day and today so we’re grateful she was able to even suit up the last two games because she was very questionable as well.”

Sac State was able to play a more competitive second quarter, only being outscored by two at 17-15 as the Bears held a 43-31 lead at intermission.

With the game well in hand, the Hornets and Bears played an even fourth period, each scoring 16 points. Northern Colorado went on to defeat Sac State 79-61 to advance to the quarterfinals of the Big Sky Tournament.

“I’m proud of my team,” Harkleroad said. “We did what we could. We played hard and tried to control what we could. I’m grateful for these young ladies and the effort they brought today.”

Without Nicholas, Sac State struggled to rebound. The Bears nearly doubled the Hornets in rebounding at 51-26. Northern Colorado grabbed 19 offensive rebounds, and generated 15 second chance points, which was nearly the difference in the final score.

Senior guard Gabi Bade had a strong performance in her final game as a Hornet. Bade scored a team-high 16 points on 7-of-14 from the field with two rebounds and one steal.

“It’s been amazing being able to be part of this system and culture and be coached by coach Bunky and the other coaching staff and being able to play with my teammates like Milee (Enger),” Bade said. “It was a great experience being here (at Sac State).”

Northern Colorado was led to the win by freshman forward Alisha Davis who had a double-double, scoring a career-high 32 points and grabbing 13 rebounds. Davis was highly efficient, making 11-of-12 field goals and 10-of-12 free throw attempts.

“Alisha Davis, she’s a special player,” Harkleroad said. “We had no answer for her. We’re lacking a little size and some physicality right now with our post Kennedy Nicholas being out. Northern Colorado did a great job of capitalizing on that.”

The loss to the Bears marked the fourth consecutive season that the Hornets have been a first round exit in the Big Sky Tournament. Coach Bunky Harkleroad was highly successful in his first two seasons from 2013-15, compiling a 36-28 overall record. Since then, the Hornets have a combined record of 49-101 in the last five seasons. Harkleroad has one year remaining on his contract.