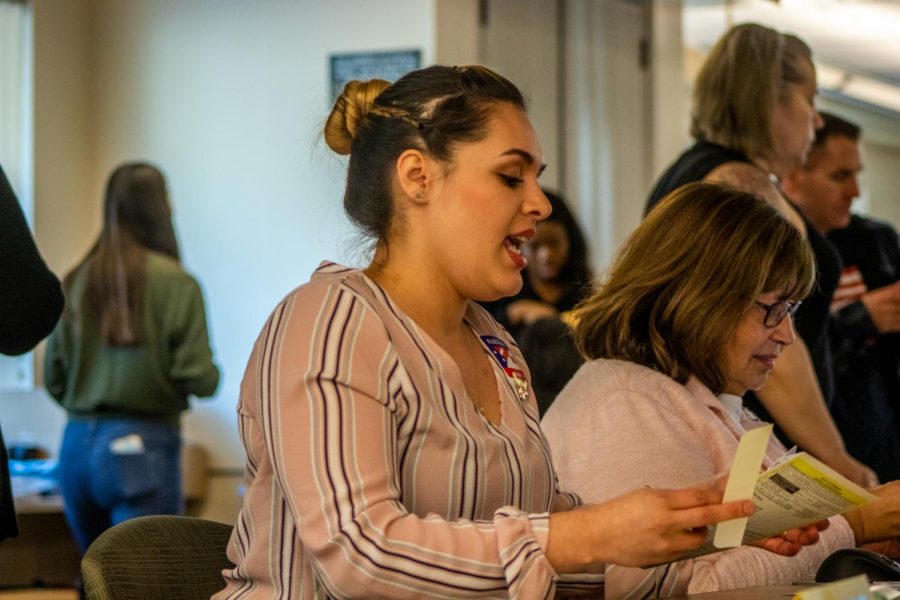 Sacramento State students kicked off Super Tuesday by voting at the Modoc Hall Vote Center, open from 7 a.m. to 8 p.m.

Students who are registered to vote in Sacramento County stopped by to submit completed mail-in ballots. Some came to register and vote same-day, or vote in person and collect their, “I voted” sticker.

Voters who bring in their ballots can turn them in in a pink bag at @sacstate’s voting center in Modoc Hall. Once full the bag is sent to Sacramento’s Elections Office where they validate signatures and addresses. @TheStateHornet pic.twitter.com/1TGHDF94YI

“I came to this hall specifically because it is the (polling place) closest to me. Easy access,” Torres said. “It is important to vote because even though we are one small person, us together, and speaking up on what we think and what we believe in makes a change.”

The vote center was brought to Sac State in November of 2018 by Associated Students, Inc. The vote center re-opened Saturday for the 2020 primary elections.

This year, ASI coordinated with UTAPS and used the Hornet Express Shuttle’s Stinger Line to transport students from the center of campus to Modoc Hall’s Vote Center on College Town Drive.

“It is an important service especially for those who can’t drive,” England said.

Seen is the Hornet Shuttle Stinger Line transporting students to and from the Modoc hall voting center @TheStateHornet pic.twitter.com/ZGRfVdAdck

Political science major Francisco Tarin said he voted for Tulsi Gabbard in the primary because of his experience growing up in a military family.

“My father was in the Navy,” Tarin said. “Tulsi understands the difficulty of what it’s like to be in military life.”

“Votings important because we all need our voices heard and if one of us keeps silent then we’re just gonna stay in the darkness,” said Criminal Justice major Laura Ramirez Hernandez @TheStateHornet pic.twitter.com/BwgV4g7eQT

Francisco Tarin, Political Science major said he voted for @TulsiGabbard because it correlates with his military views and she represents his political views more than the other presidential hopefuls. @TheStateHornet pic.twitter.com/bct2F6c7pm

While students voted at the center, others were campaigning for their preferred candidate at the Sac State Library Quad. Political affiliations crowded the area, giving out signs for candidates they supported.

No matter who you vote for, get out and VOTE! You can go to the Sacramento County Vote Center inside Modoc Hall today between 7 a.m. and 8 p.m. to participate. @TheStateHornet pic.twitter.com/rD6XLVyEPY

Mike Craig, the vote center inspector said the amount of people will increase as time passes by.

“I would say 95% of the people waiting in line now are students and later we will get the after- work crowd,” Craig said.

Craig said compared to the 2018 midterm elections, there seems to be less people at the voting center but it is difficult to determine.

“The disaster happens really late at night after work hours, it’s probably a little less busy but again it is really hard to gage,” Craig said. “It’s just a matter of how (long) the line will go around outside before we close at 8 (p.m.)”