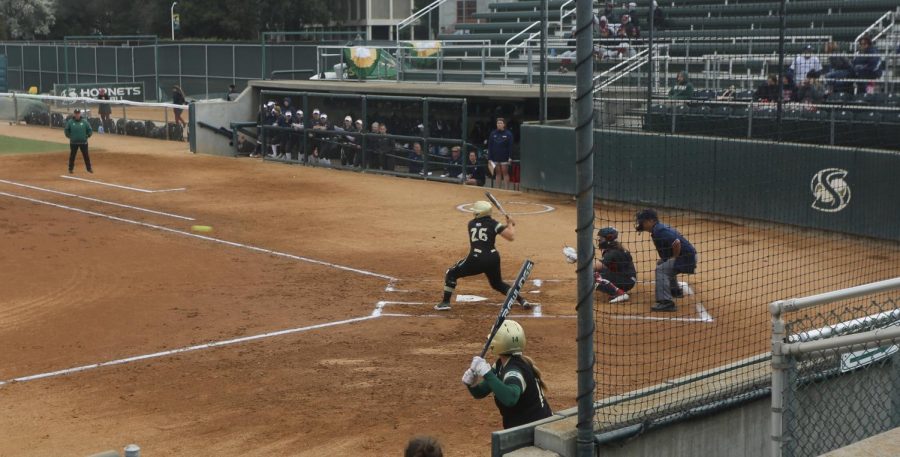 Junior infielder Mo Spieth hits her fourth home run of the season during the Capital Classic Tournament on Sunday, March 1 at Shea Stadium. The Hornets took home two wins during the tournament over the weekend.

After defeating rivals the University of California, Davis in a close 4-3 game Wednesday, the Hornets (12-8) were on a roll, opening the tournament with an 8-0 win in six innings over Utah State University (9-10).

Freshman pitcher Marissa Bertuccio struck out five straight batters combining for 12 strikeouts and only three hits through six innings. The win was also highlighted by a solo home run from junior infielder Mo Spieth and a two-run shot from freshman third baseman Lewa Day in the fifth inning.

The team dropped their next game against Texas State University (12-7) 2-0.

The game remained scoreless until the top of the sixth when the Bobcats jumped out to a 2-0 lead which proved to be all Texas State needed to take down the Hornets.

Senior pitcher Danielle Sperry and sophomore pitcher Alyssa Nunez combined to allow seven hits and only two walks each for the Hornets.

The only game for Saturday was stopped in the top of the ninth inning against Saint Mary’s College.

After the Gaels took a commanding 6-0 lead into the sixth inning, the Hornets scored four runs to cut the deficit to 6-4.

Saint Mary’s quickly battled back in the top of the seventh, adding two more runs. However, the Hornets weren’t finished either as they scored four more times to tie the game and cause the Gaels to change pitchers.

The last pair of games on Sunday were against the University of Connecticut (11-4) and Santa Clara University (7-13), where the Hornets saw a loss and a win.

Connecticut opened the scoring with an unearned run in the third inning to take a 1-0 lead over the Hornets.

The Huskies continued to take advantage of errors made by the Hornets adding another run in the top of the fourth.

Sac State responded in the bottom of the inning with a home run from Spieth. It was her fourth home run of the season.

Another great hit by Spieth during the bottom of the sixth inning got the Hornets closer, bringing the score to 4-3.

During the seventh inning, the Huskies added five more runs. While Sac State had chances to score again, they failed to bring the runners around and continued to make errors, leading to their loss.

“The balls caught us on a bad foot or a crossover step,” coach Lori Perez said. “We have to better prepare ourselves from the bat-off to the ball to be in a better position and playing a little faster. We are going to get better. I don’t have any doubts.”

The second game on Sunday and final game of the Capital Classic Tournament saw the Hornets take down Santa Clara in a dramatic victory.

The Hornets tacked on another run in the third, but the Broncos responded in the sixth and seventh innings and took a 4-3 lead.

With no base runners and two outs, Day hit an inside-the-park home run to tie the game 4-4 in the bottom of the seventh inning.

“When I was running the bases, that was fun,” Day said. “It looked like coach Perez had her hands up at first, but I was still looking.”

As she continued to look, Day realized Perez’s indications were to keep running.

“I felt like my legs were giving out and I thought I was going to fall, but it was exciting,” Day said.

For the second time in the tournament, Sac State headed to extra innings. After a Broncos’ error, junior outfielder Charizma Guzman scored the winning run to give the Hornets a 5-4 victory.

Bertuccio dominated in the circle, pitching a complete game and allowing seven hits with seven strikeouts.

The Hornets play next at UC Davis on Tuesday. First pitch is set for 2:30 p.m. at La Rue Field.