‘I knew my time would come eventually if I kept working’: A football player’s 2,172-mile journey 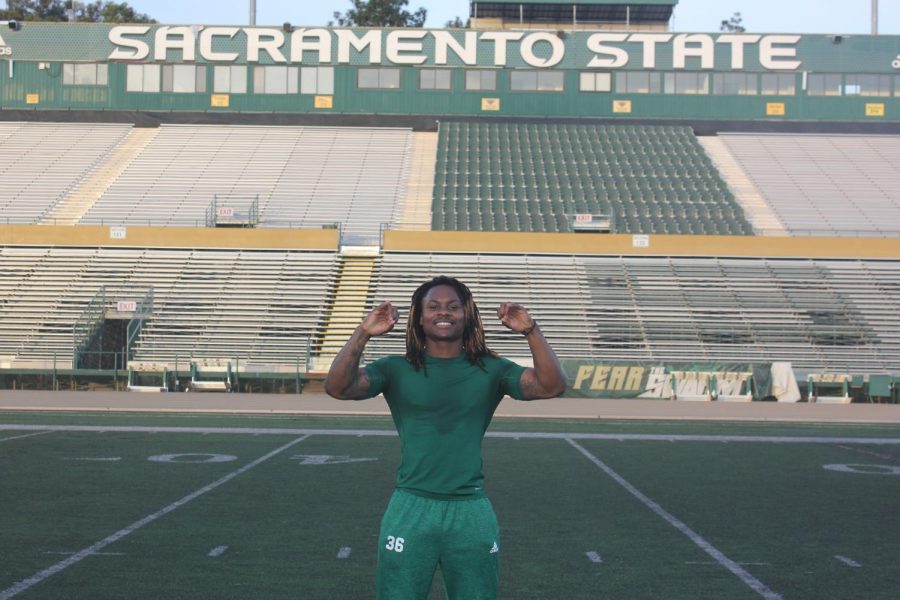 Sac State defensive back Prince Washington poses for a photo in Hornet Stadium after the team's morning workout on Friday, March 6. Washington was put on scholarship after joining the team as a walk-on and took over as the starting defensive back for the last three games of the 2019 season.

After the last whistle blew to end the Sacramento State and University of California, Davis game, starting defensive back Prince Washington celebrated a Cinderella season that saw the Hornets win the Big Sky title for the first time in school history.

The success of the 2019 season has tremendous meaning to the players and coaches of the Sac State football team. To Washington, it meant finally cashing in after betting on himself since high school.

Washington grew up in Butler Park in East Fresno.

“There’s lots of crime going on out there and many people who try and recruit young people to be part of things that are not healthy,” said Washington’s cousin Ronnie Holley. “He did his part to stay away from drugs and gangs.”

Washington found strength in football, his academics and his mom.

“Football and school was his drug to help him escape a life of agony and triumph,” Holley said. “His mom was strong, and she loved him and helped him to persevere through their situation, they had to live where they lived.”

Washington also used his love for rap music as a way to keep him away from other outside distractions. He has performed at numerous events around Fresno, exhibiting his skills on the mic.

“It really became a hobby at the end of my senior year,” Washington said. “My friends were making music, and I just went over one day. I was like, let me try and I was good at it. A couple of months later, I ended up buying my own microphone.”

Washington knew at a young age that sports were going to be his ticket out of Fresno. He attended Bullard High School where he played basketball, track and football.

One of Washington’s mentors growing up was his high school coach Yosef Fares. Fares had always kept his eye on Washington.

“I watched Prince grow up from seventh grade to now, and he has always been the same kid,” Fares said. “He was always self-motivated and chased his dream without needing the OK from others. He is a true leader. He was never a kid you ever had to worry about grade-wise, he was always on top of his class.”

During Washington’s senior year of football, he received All-City and All-League first team honors. Washington dominated on the field, but during his time at Bullard High he didn’t receive any scholarship offers. It wasn’t until his final game in the regular season where he caught the eye of a coach from University of Wyoming  who was there to scout some of his teammates.

“My high school coach told like five players that Wyoming is going to be in the stands tonight, and he named those people off by name,” Washington said. “My name wasn’t one of those names that he called, so that didn’t make me feel like right. I felt like I was one of our better players.”

In that game, Washington had four touchdowns, over 300 total yards, one interception and was named the MVP.

“After the game, I talked to the coach, and they didn’t even know who I was,” Washington said.

After debating whether or not to go to junior college, Washington decided to attend the University of Wyoming as a walk-on player. However, not all of his family were on board with his decision. His mom didn’t want to see her son move over 1,000 miles from home.

Washington’s football career at Wyoming didn’t turn out the way he wanted it to. He redshirted his freshman year and in his second year he appeared in only two games.

During spring workouts of his third year, Washington climbed up to second on the depth chart for the defensive backs but he suffered a hamstring injury one week before the season opener.

“I was heavy in the rotation playing a lot and I pulled my hamstring a week before our first game,” Washington said. “I dropped from second on the depth chart to sixth on the depth chart. And they took me off all the special teams once I got hurt.”

“I went to the coaches to ask what happened, can I earn my spot back?” Washington said. “But by that time the season was starting and they already had their guys. I was pushed to the side and I didn’t like how the coaches handled that situation.”

Washington came to a crossroads in his Wyoming career. He faced real uncertainty about his playing time in the future and knowing that he had already used up two years of his eligibility, he decided to transfer.

Now, Washington was without a team and school to play for. With only two years of eligibility remaining he knew he couldn’t go the junior college route because that would use up a year of his eligibility and if he transferred to another Division I school he would have to sit out a year. He decided to go the Football Championship Subdivision route, where NCAA rules would allow him to avoid sitting out a year after transferring.

Washington knew he wanted to come back home, but he wanted to leave all of his options open. He sent his tape to schools all throughout the U.S., but was hoping to go back to California.

He narrowed his sights to three schools in California, even if it meant doing it as a walk-on again.

Washington sent his tape out to the Sac State coaching staff, and he never got a response back. He was determined to find a school, so he drove to Sac State to try to have the opportunity to present his case to the coaching staff that he should be on the team.

“I drove from Fresno to Sac State and I went up to the offices to talk to the coaches without them knowing,” Washington said. “They didn’t respond to anything so I just showed up one day to talk to them. I caught them going out to lunch and that’s how I first got into contact with the coaches.”

Defensive Pass Game Coordinator and secondary coach for Sac State, Cherokee Valeria had got word that Washington was planning to transfer before he arrived on campus.

“I knew about Prince before he even walked on campus to talk to us,” Valeria said. “One of his good friends from Fresno came in and said that he had a buddy that was looking to transfer and that he was wanting to come back to California and be closer to home. However, there are rules that we can’t call or talk to players from other universities before they get a release.”

Washington would have to prove himself all over again to the Sac State coaches when he joined the team in summer of 2019, as a walk-on. Just like at Wyoming, he started at the bottom of the depth chart.

He quickly rose up the depth chart during their fall camp but that didn’t last as he again pulled his hamstring and was sidelined for about a week.

During the time Washington was hurt, Sac State awarded aid to six non-scholarship players. Once again, Washington didn’t get his name called.

“I knew those other guys have already been here. I was happy for them,” Washington said. “I knew the coaches hadn’t seen as much of me as they probably wanted to because I was hurt at the time. I knew my time would come eventually if I kept working.”

Coach Valeria said that Washington did not get the scholarship, because it was unavailable for his position and that he had not earned it yet.

“As with any other walk-on, they have to earn it,” Valeria said. “Coming into the secondary room he had to not only beat out the other cornerbacks and become the starter but he had to prove that he could do everything off the field at the championship level that we wanted.”

As the season progressed, Washington’s time would eventually come, and betting on himself would pay off. He was put on scholarship, and he took over as the starting defensive back for the last three games of the season which included the playoff game against Austin Peay.

Typically when non-scholarship players get put on scholarship, it’s a joyous time, and the player is overwhelmed with emotion. Not Washington, he had a different way of looking at.

“I felt like I deserved this for years already,” Washington said. “At Wyoming, they talked about giving me an offer year after year, but it never came. I still have this chip on my shoulder, and I have been through all of this. I’ve always put in the work, but I was never good enough. To me, it was kind of a disappointment because it took me this long to get it.”

While he continued to keep that chip on his shoulder, Washinton said he was grateful for the Sac State coaches believing in him.

Next year Washington is expected to compete for the starting defensive back position but due to the COVID-19 outbreak, all team workouts have halted.

“Of course, I can’t get the team workouts in or get into a traditional weight room, so I have to be creative with my workouts,” Washington said.

Although he can’t be with his team, this break has given him a chance to catch up with family and make more music.

Washington said he doesn’t let football be the thing that defines him as a person. While he loves football and wants to play at the next level, he said he believes it’s just part of the story and not the whole story.

“Without football, I’m still a business person and still a family man,” Washington said. “Football isn’t the main thing in my life. I have other things going on, and life goes on without football.”