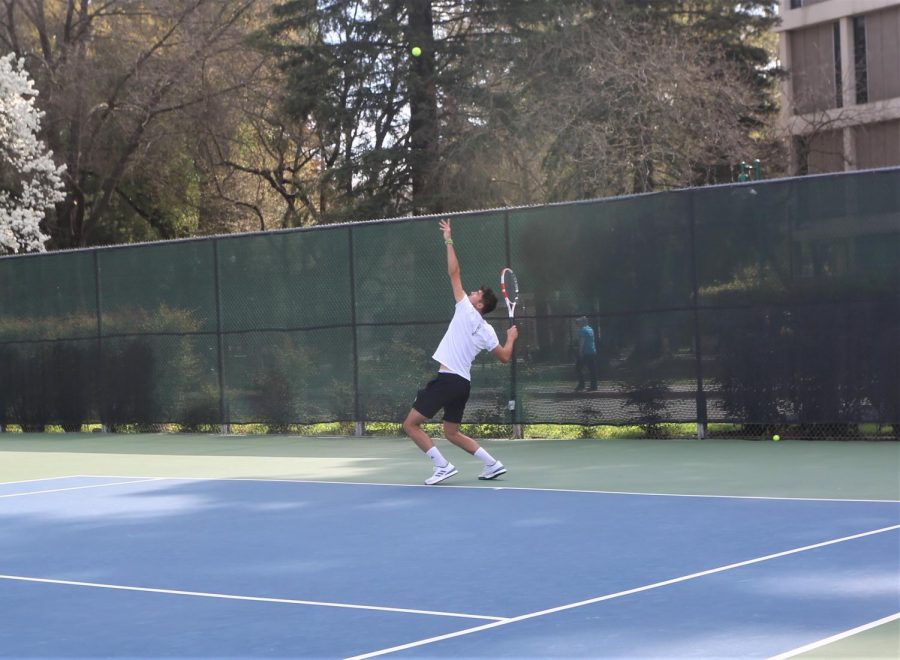 Sac State senior Louis Chabut serves during the doubles set on Friday, March 6 versus University of Hawaii at the Sac State Tennis Courts. The Hornets fell to Hawaii 4-0.

The Sacramento State men’s tennis team was handed their 9th straight loss in a competitive yet lopsided match against the University of Hawaii on Friday by a score of 4-0.

The match was the first of the 5th annual Golden State Invitational which is hosted at the Sac State Tennis Courts on campus.

The Hornets matched up against Hawaii as they improved to 9-5 on the year. Sac State sank to 1-10 following the loss.

The match began with doubles play, as Hawaii took the point 2-0 with the third match being left unfinished. That victory earned the Warriors an early 1-0 lead.

Then the match went to singles as Hawaii’s Axel Labrunie defeated freshman Elliot Arnarp by the scores of 6-1 and 6-0 to extend the Warriors’ lead to 2-0.

The Hornets’ struggles continued as junior Michael Viscarra fell to Hawaii’s Blaz Seric by scores of 6-3 and then 6-2.

“My guy (Ilagan) just hit the most ridiculous angles,” Legaspi said of his singles opponent.

Coach Kevin Kurtz said he was pleased with his team’s performance, noting that although they lost 4-0, it was competitive throughout.

Kurtz also acknowledged that their opponent was a quality team as he stated that they beat the University of Washington.

The Hornets were defeated by Washington in a swift 6-1 match earlier this season on Feb. 22.

The final three singles matchups concluded early due to a clinch format, where as soon as Hawaii clinched victory they ended unfinished to continue the tournament.

The Hornets are a young team with only two seniors and three upperclassmen in total. However, the two seniors stood out today as Legaspi had the aforementioned tight match before falling to Ilagan, while the Hornets’ other senior Louis Chabut was the only Hornet to win a set against Hawaii.

Chabut and Legaspi were doubles partners as their match was not finished.

“I felt like singles was very close. It could’ve gone either way,” said Legaspi after the match.

Next up for Sac State is a match against the New Mexico State Aggies, which will begin on Friday as the second act of their double-header.

“It will be a different match. This is definitely a winnable game as (New Mexico State) barely beat Eastern Washington, we’re up and ready to face off in our challenge,” Legaspi said.

Eastern Washington is the Hornets’ lone win of the season. The Hornets conclude the tournament Saturday.