The Hornets battled late but lost 79-71 to Grizzlies 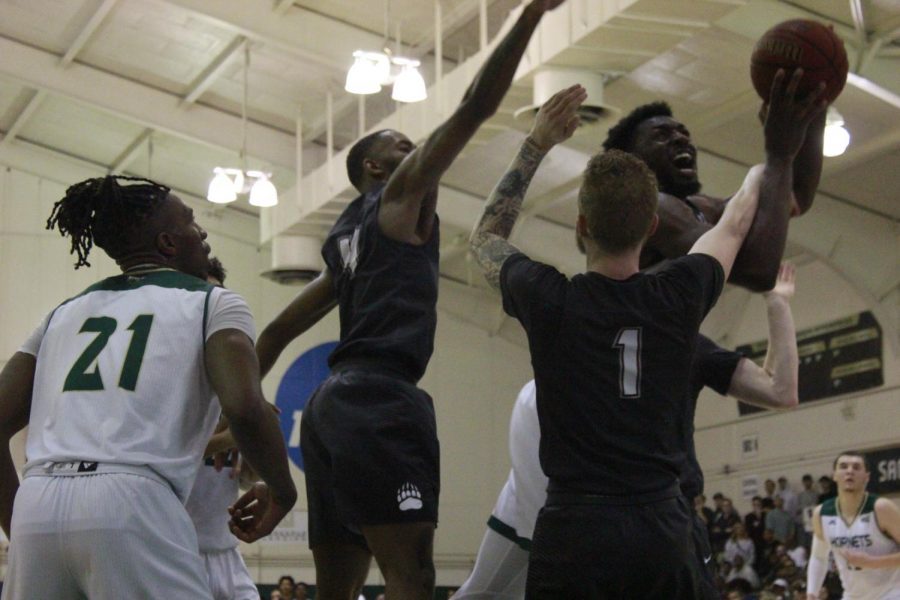 Sac State senior center Joshua Patton goes through contact on his way to the hoop against the University of Montana on Saturday, Feb. 29 at the Nest. Patton finished the game a perfect 6-6 from the field.

The Sacramento State men’s basketball team lost its last home game of the season against the University of Montana 79-71.

The Hornets (15-13, 8-11 Big Sky Conference) came off a blowout win against Montana State needing just one more win to finish the season with a winning record for the second time since joining Division I.

Before tipoff, seniors Chibueze Jacobs, Osi Nwachukwu, Izayah Mauriohooho-Le’afa and Joshua Patton gathered with their loved ones at center court for their last game in the Nest.

“It was beautiful,” Nwachukwu said. “I had some family that hasn’t been to any of my games [and] I got to share it with the other three seniors.”

The Hornets started the game with the edge early, Patton and junior forward Bryce Fowler were strong on offense. A score inside by Nwachukwu put the Hornets up 10-2 on 4-6 shooting after the first timeout.

The Grizzlies battled back and cut the lead to two at 14-12.

For the Grizzlies, it was junior guard Timmy Falls going 3-3 from the 3-point line.

The Hornets continued to make it interesting early in the first half, resulting in three lead changes. A 3-pointer after a timeout by Mauriohooho-Le’afa put the Hornets back up by two 19-17.

The Grizzlies were a challenge for the Hornets defensively. Montana was led by its veterans who had the experience of a Big Sky championship in 2018. They would ignite a 6-0 run to go up on the Hornets 29-21.

Both Mauriohooho-Le’afa and Nwachukwu lead the way for the Hornets in the first half with seven points. Patton went into the break with six points and six rebounds. The Hornets went to halftime down 28-36, shooting 54% from the field.

The Hornets came out in the second half getting the ball to their captain Patton, who made his presence felt inside scoring seven points in the first three minutes. Junior forward Ethan Esposito came off the bench and was a boost for the Hornets offensively.

The Grizzlies were hot to start the second half, getting a balanced effort from their starters. They pushed the lead to 15 with 11 minutes left to play.

A long rebound which turned into a loose ball and ended up resulting in a dunk for the Grizzlies could have very well been the deflator for the Hornets.

“They get out, they pressure you, they cause turnovers,” said coach Brian Katz.

However, the Hornets would light up and go on a run. With 8:28 remaining, the Hornets began the lock up on defense the way that they are accustomed to at home. This began a 16-1 run that led to the Hornets tying the game at 59-59 after two made free throws from Mauriohooho-Le’afa.

“Credit to our team we never give up,” Patton said. “We’re scrappy, we get after it defensely, so when we were down we knew that all we had to do was start getting stops.”

With the game close down the stretch, the Hornets needed their defensive effort more than ever.

Unfortunately, the Grizzlies continued to make big plays and took the lead back.

Montana senior guard Sayeed Pridgett showed up as a closer in the clutch. The Grizzlies were able to push their lead back up to as much as 10 before holding on to win it 79-71.

“Pridgett is really good, if he’s not MVP then he should be,” Katz said.

There were big performances tonight from the seniors. Nwachukwu ended the game with 20 points on 8-12 shooting from the field, as well as six rebounds and three steals.

Mauriohooho-Le’afa finished with 15 points shooting 3-5 from deep, with two steals. Patton finished the game a perfect 6-6 from the field and 7-10 from the free-throw line for 19 points, he also added nine rebounds and a block.

The Hornets are on the road for their last regular season game next Saturday against Portland State at 7 p.m.