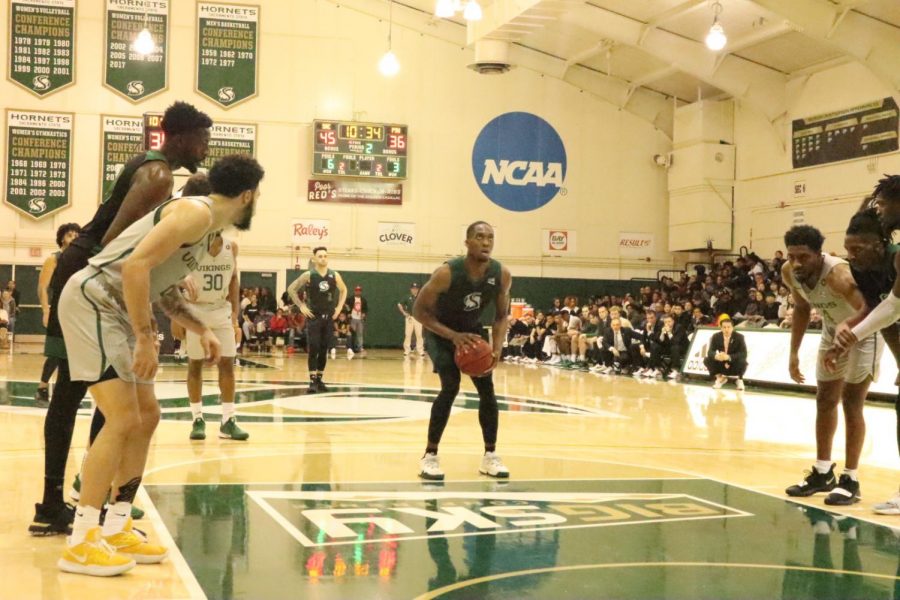 Senior forward Chibueze Jacobs attempts a free throw against Portland State at the Nest on Thursday, Jan. 24. The Hornets dropped their final regular season game on the road to the Vikings 76-72.

The Vikings led the majority of the game but the Hornets stayed tight and kept it close until the final buzzer, as the Vikings’ guard Holland Woods went to the line to ice the game with two seconds remaining.

Woods, who is top-five in the conference in points-per-game, assists per game and steals per game, dropped 22 to lead the Vikings, which included 16 free throws.

RELATED: Sac State men’s basketball player is the ‘connector of the team’

For the Hornets, senior center Joshua Patton led the way with 14 points, nine rebounds and three blocks, including an emphatic denial of Portland State’s Sal Nuhu, who is the only player in the Big Sky conference with more blocks per game than Patton.

Friday night’s game was a clash of cultures as Sac State entered the game with the lowest points allowed per game and Portland State had the highest points per game. Although the tempo favored the Hornets by slowing down the pace and having a lot of free throws, the Hornets also had 17 turnovers and allowed 24 points off them.

The two teams last met on Jan. 24 in Sacramento when the Hornets left victorious by a score of 66-55 backed by a strong defensive effort.

Down the stretch, the Hornets defense locked down and didn’t allow a made field goal in the final six minutes of play. However, they allowed several free throw attempts, 27 in total for the whole game which was just a little too much against a talented Portland State team.

Sac State shot the ball well Saturday night finishing 43% from the field, 38% from beyond the arc and 75% from the free throw line, but early on in the game they were too loose with the ball and Portland State took advantage.

The Hornets now find themselves tied with Weber State University as the 8th seed in the upcoming Big Sky tournament, where the winner of the tournament is guaranteed a spot in the NCAA tournament, one that the Hornets have not participated in since joining Div. I basketball.

Coach Brian Katz, who is in his 12th season with Sac State is looking to coach the Hornets to their second record above .500 since 1991.

In the first round of the Big Sky tournament, the Hornets will face off against Weber State in the eighth versus ninth seed game. The Hornets split the season set against Weber State winning in Sacramento but losing on the road. The winner of that matchup gets to face the number one seed Eastern Washington University on Thursday.