Tiana Johnson describes her move from the mountains to the city 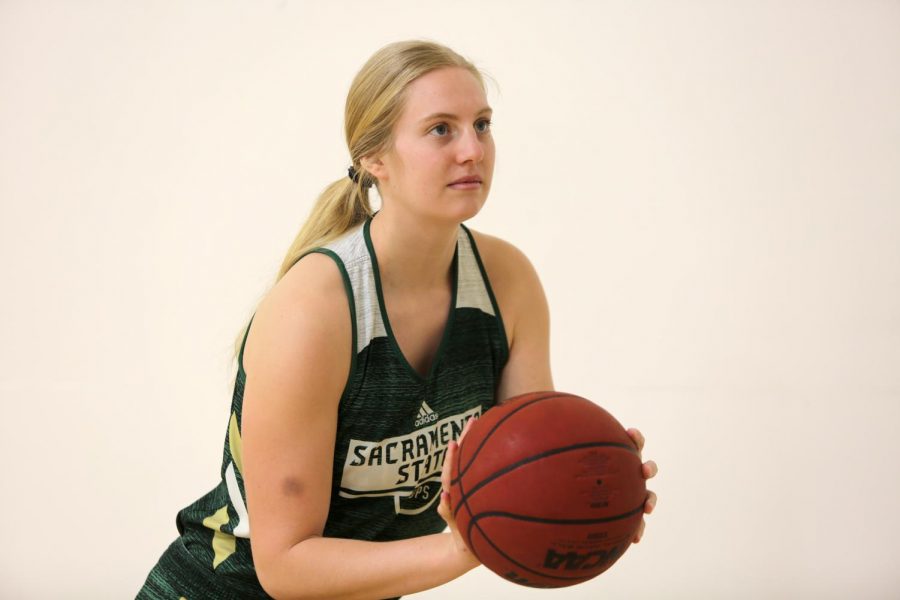 Sac State sophomore forward Tiana Johnson prepares to shoot at Yosemite Hall. Johnson has averaged 11.6 points and 5.5 rebounds per game in the 2019-20 season.

Johnson was born to parents Tryg and Lynette Johnson, who encouraged Johnson and her three older sisters to get outside and enjoy recreational activities.

“My parents did a really good job of having us recreate whenever we could,” Johnson said. “Rafting is our favorite thing. (I was) fortunate to live in a really awesome, beautiful place where we have lots of rivers and lakes. We would spend as much time as a family together as possible outside.”

In 2013, Johnson began her freshman year at Flathead High School where she played basketball and volleyball. However, basketball was not always her favorite sport.

“I played hockey for a really long time and I would’ve pursued that probably, it’s just really hard in Montana to go anywhere with that just because we’re a small town,” Johnson said. “My parents definitely said play whatever sport you want. But if you want to play in college, you do need to kind of decide what sport you want to invest the most energy and time with.”

During her first year, Johnson got thrown into the fire by playing basketball on the varsity team.

“As a freshman, I was kinda thrown into varsity right away and that was hard,” Johnson said. “It was a struggle for me just to find where I would fit in. I felt kind of like just an outside kid for awhile. Then over the next three years, I just started to develop more. I was definitely a late bloomer.”

Following her stellar senior year, Johnson received offers from Sac State, Utah Valley, Dixie State, Lehigh and Western Washington. She ultimately decided to come to Sacramento because of the campus, Sac State having a bachelor’s degree program in nutrition and the idea of playing as a freshman.

“We thought she would be a very versatile player and you don’t have an opportunity to recruit kids that can shoot (and) that are that long,” said coach Bunky Harkleroad. “We haven’t had that opportunity very often here at Sac State. Also, TJ recruited us a little bit too. She reached out, we had some email dialogue and then followed her last summer and liked what we saw.”

Unfortunately for Johnson, her freshman season in 2017 was cut short. She only played in two games for the Hornets before suffering a season-ending hip injury. However, Johnson was able to take a medical-redshirt season following the injury.

Johnson may have been sidelined in her true freshman season, but she was able to meet one of her current closest teammates when she helped host an official visit in Sept. 2017 before the season began.

“I first met TJ on my official visit coming to the school,” said sophomore point guard Milee Enger. “It was her freshman year, I was a senior in high school and we both just kind of clicked with each other. We were both kind of quiet, reserved and had the same values and mindset towards basketball and life.”

Despite the injury, Harkleroad was confident in the skill set Johnson would bring to the team over the next four years.

“You can’t teach her size or her length,” Harkleroad said. “That’s not necessarily a skill set, but TJ is a pretty good spot-up shooter and she’s becoming more confident with the basketball in her hands. She’s developed a pretty decent set of posts skills (because) she played more on the perimeter before she got here. Her versatility is probably her biggest asset.”

As a redshirt freshman, Johnson played in all 29 games for Sac State and made 18 starts, including in the final 12 games. She averaged 4.1 points, 3.2 rebounds and 17.6 minutes per game. In the classroom, Johnson excelled earning Big Sky Conference All-Academic honors.

Due to players transferring and graduating, Johnson and her size have been greatly needed this season for the Hornets. She can play both guard and forward, but with a 6’2 stature, has been needed to primarily play in the post at forward this season.

“Definitely, it was a challenge at first because I have never really played as a post,” Johnson said. “But with the help of the coaching staff and family support, it was like if you are able to play post and you can shoot the three, that’s just going to make you a more versatile player.”

Switching to playing in the post has given Johnson a chance to see more minutes. Johnson has stepped up playing 24.4 minutes per game and averaging 11.6 points and 5.5 rebounds.

“I have been able to play a lot and so that’s a huge blessing and (I’m) very fortunate for that,” Johnson said. “I’ve had some success throughout the season so I’m very grateful for that as well.”

Senior forward Kennedy Nicholas went down with a right-ankle injury on Feb. 8 and has been out since, making Johnson the tallest active player on the team. In the first game without Nicholas on Feb. 13 at Southern Utah, Johnson set new career-highs in points and rebounds with 26 points, 14 rebounds and most importantly, a Hornets win.

“With Ken going down and then bigs leaving, she’s had to step up in the post position,” Enger said. “So she can play an outside, inside game and space the floor out, but also have the ability to post up and score in the paint.”

Off the court, Johnson shares a unique relationship with her water bottle that she’s had since the sixth grade.

“I just add some stickers on it that I love that kind of represent who I am, like Montana, but outdoors,” Johnson said. “It goes everywhere with me and I think that’s why I like it so much is that I know wherever I’m going, it’s going. It might be kind of weird to be attached to such an inanimate object. Life changes all the time, but my water bottle always stays the same.”

Johnson takes so much pride in her prized possession that she created an Instagram account during her freshman year of high school to show it off to friends and family.

“I enjoy (it because) it allowed me to kind of put my other personality sort of out there, because I’m a pretty quiet kid, so it was fun,” Johnson said.

Johnson and the ninth-seeded Hornets (8-21, 6-14 Big Sky Conference) begin the Big Sky Tournament in Boise, Idaho on Monday at 1:30 p.m. against the eighth-seeded University of Northern Colorado Bears (12-17, 8-12) at CenturyLink Arena.