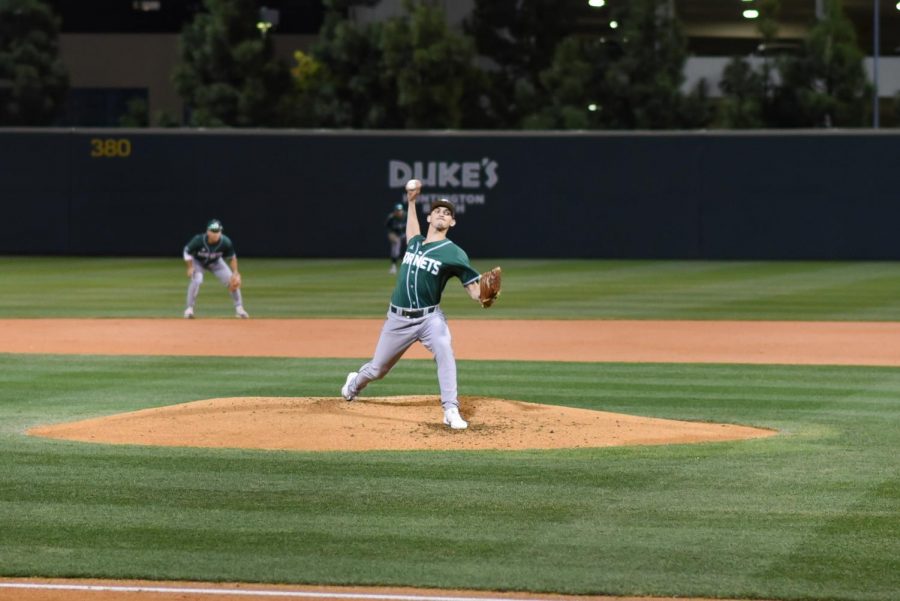 Sac State junior righty Scott Randall throws a pitch against UC Irvine on Saturday, March 7 at the Bren Events Center. The Anteaters won the first two games, leading to a series win over the Hornets.

For the first time in 2020, the Sacramento State baseball team hit the road to play a three-game series at the University of California, Irvine.

The Anteaters (8-7) took the first two games of the series  Friday and Saturday before the Hornets (9-6) avoided the sweep with a dominant 8-0 win Sunday.

Sac State began the season-long 11-game road trip with a 2-0 loss to Irvine in a pitchers duel. Senior Parker Brahms (2-1) got the start for the Hornets and only had one blemish on his nearly perfect start.

In the bottom of the third inning, senior infielder Adrian Damla hit a two-out pitch to right field to score the games only two runs and eventually give the Anteaters the victory. Brahms pitched six innings, allowing five hits and two runs with seven strikeouts. Junior lefty Brady Rodriguez tossed the final two innings in relief and allowed two hits with one strikeout.

Irvine had one of the best pitchers in the country on the mound against the Hornets Friday, starting junior righty Trenton Denholm (2-2), who attended Oak Ridge High School in El Dorado Hills with Rodriguez.

Denholm pitched six innings and allowed four hits and three walks with five strikeouts. Senior John Vergara earned his third save by pitching the final 1 ⅓ innings and striking out two Hornets without allowing a run.

The Hornets scored first Saturday with two runs in the first inning but ultimately lost 3-2. With two runners on base, junior catcher Dawsen Bacho doubled to left-center field to score two runs.

However, Irvine junior outfielder Mike Peabody tied the game by himself with an RBI double in the first inning and a solo home run in the third inning. The Anteaters took the lead for good in the fourth inning with an RBI single, as they went on to win Saturday 3-2.

Irvine had two junior right-handers on the mound Saturday. Peter Van Loon (2-0) tossed the first six innings as he surrendered four hits, two runs and two walks but had four punchouts. Josh Ibarra earned his first save of the season by pitching the final three innings, allowing only one hit and one walk with three strikeouts.

The Hornets broke out of their hitting slump in a big way Sunday, winning emphatically 8-0. Junior infielder Steven Moretto got the scoring started in the second inning with a sacrifice fly to center field. Sac State then scored once in the third and three times in the fifth inning to take a 5-0 lead.

Moretto put an exclamation point on the win with a solo homer down the left-field line in the eighth inning. The Hornets added two more insurance runs in the top of the ninth inning to win 8-0.

Sophomore righty Travis Adams (2-1) made his second consecutive quality start Sunday with seven stellar scoreless innings, allowing only two hits while striking out seven Anteaters. Rodriguez and junior right-hander Stone Churby each pitched an inning of relief in the win.

First pitch against the Dons at Max Ulrich Field on Tuesday is at 3 p.m.