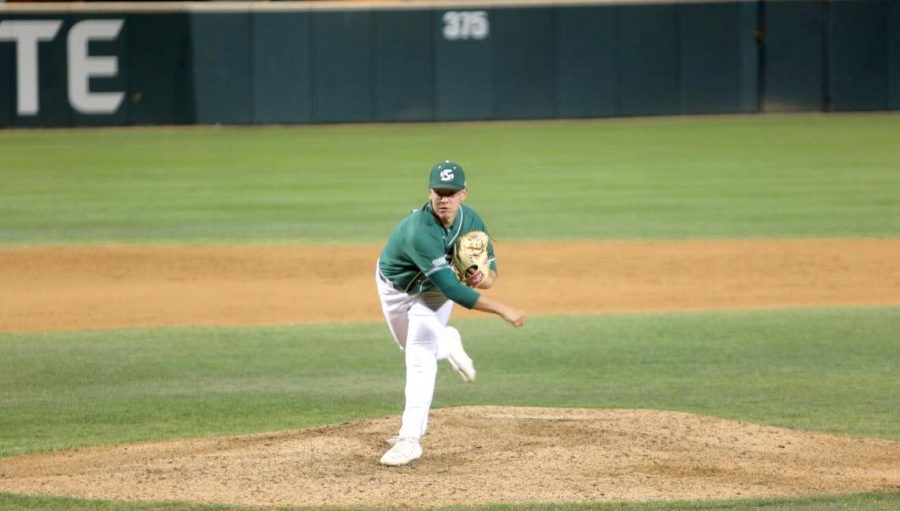 Sac State sophomore Evan Gibbons throws a pitch against Pacific on March 3, 2020 at John Smith Field. The Hornets lost at San Francisco on on Tuesday, 12-4.

The Sacramento State baseball team continued a season-long 11 game road trip with a 12-4 loss at the University of San Francisco on Tuesday afternoon.

The Hornets (9-7) scored first but surrendered nine unanswered runs, leading to the lopsided loss to the Dons (9-8). Twelve runs scored is a new season-high for San Francisco.

Sac State opened the scoring with two runs in the first inning. Junior catcher Dylan McPhillips and junior outfielder Chris Gonzalez each hit RBI singles to give the Hornets the early lead.

The Dons earned their first run in the next inning on a sacrifice fly. In the third inning, San Francisco junior outfielder Nick Yovetich smashed a grand slam to right center field. The Dons added one more run in the inning on an RBI walk, taking a 6-2 lead into the fourth.

San Francisco continued their onslaught with two runs in the fourth and one run in the fifth inning.

Sac State ended their scoring drought in the seventh inning as junior catcher Dawsen Bacho hit a two-run homer to right center field to trim the deficit to 9-4. The home run was Bacho’s second of the season and he now has a team-high 11 RBIs on the year.

The Dons responded to Bacho’s homer with three more runs in the bottom of the seventh to ultimately win 12-4. Freshman righty Eli Saul (1-1) took the loss for the Hornets.

Saul pitched the first 2 ⅓ innings, allowing four hits, five runs, one walk and one hit batsman with one strikeout. Coach Reggie Christiansen used six additional pitchers in relief to get through the final 6 ⅔ innings. Twelve runs and 16 hits are new season-highs allowed by the Sac State pitching staff.

Junior right-hander Julian Washburn got the start for San Francisco, pitching the first three innings and allowing four hits, two runs, one walk and one hit batsman with four Ks. Fellow junior righty Nick Roth (1-0) earned the win by pitching the fourth and fifth inning. Roth allowed one hit and one walk with two strikeouts.

The Hornets had six hits and left nine runners on base, while the Dons left 10 runners stranded on 16 hits.

Sac State will now travel outside of California for the first time this season to play a three-game weekend series at the University of Nevada, Reno. First pitch at Mackay Stadium on Friday afternoon is scheduled for 2 p.m.