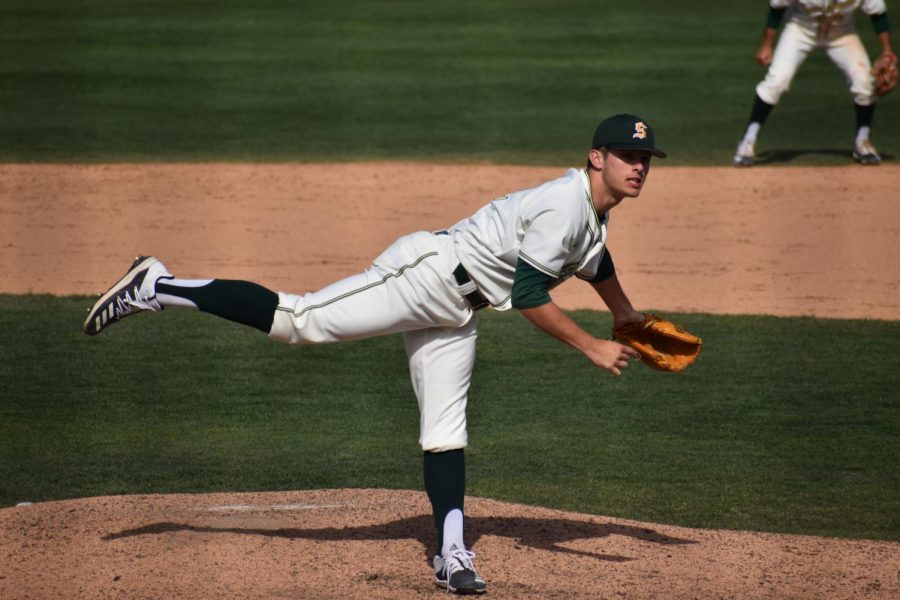 Coming off a four-game sweep of the University of Wisconsin, Milwaukee, the Sacramento State baseball team played a four-game series at John Smith Field this weekend against Santa Clara University.

The Broncos (8-5) won the first two games and the Hornets (7-4) won the last two, leading to a series split.

Santa Clara was victorious in a close contest Thursday, 6-5, and won 4-2 Friday night. Sac State broke a two-game skid with a 6-3 win Saturday afternoon. The Hornets earned the split with a 6-1 victory Sunday.

Sac State senior infielder Ryan Walstad opened the scoring with his first home run of the season to right center field in the bottom of the second inning, followed by a double from junior infielder Steven Moretto to score the second run.

The Broncos responded with a two-run homer in the top of the third to tie the game, but the Hornets took back the lead in the bottom half of the inning when junior infielder Keith Torres scored on a wild pitch. Santa Clara scored once in the fourth, fifth and sixth innings, respectively, to take a 5-3 lead.

In the eighth, Sac State scored twice to tie the game. However, the Broncos scored the game-winning run in the top of the ninth to secure the series opening 6-5 victory. There were four ties and three lead changes in total during the contest.

The Hornets scored first Friday as well, with a two-run home run from Walstad in the bottom of the second inning to take an early 2-0 lead. Santa Clara scored once in the fifth and twice in the seventh to take the lead, before adding an insurance run in the eighth inning. The Broncos ultimately won 4-2 to ensure at least a series split.

Saturday’s game was a pitchers duel for the first five innings as both teams went scoreless. Junior Scott Randall (2-0) got the start for the Hornets, pitching six innings allowing five hits, one run and one walk with five strikeouts.

The Broncos scored the first run on a sacrifice fly in the top of the sixth inning. Sac State responded with five runs in the bottom half of the inning to take a commanding 5-1 lead. Santa Clara attempted to mount a comeback in the seventh with a two-run homer to trim the deficit in half.

However, the Hornets added an insurance run in the eighth to earn the 6-3 win and snap a two-game losing streak. Junior righty Stone Churby earned his first save of the season for Sac State with two perfect innings of relief, striking out two batters without allowing a hit or run.

In the final game of the series on Sunday afternoon, the Hornets faced adversity early. Sophomore Travis Adams (1-1) got the start and found himself in a couple of jams during the first three innings. However, the right-hander was able to pitch his way out of it and limit the damage.

“I felt like the first three innings I wasn’t in a groove,” Adams said. “Going (out) there for the fourth inning and on, I felt like I found my groove and started just kinda cruising.”

The Broncos scored one run in the first inning to take the early lead. Sac State matched it in the bottom half of the inning, scoring on a wild pitch. In the bottom of the second with a full-count and two outs, Torres smashed a two-run homer to left field for his first of the season and to give his team a 3-1 lead.

Sac State added an insurance run in the third inning to go up 4-1. Outfielder Matt Smith erased any hope for a Broncos comeback in the fifth inning as the senior hit a two-run home run, his third of the season, to essentially ice the game.

“It was a good series, it was hard-fought,” Walstad said. “That’s a good team over there, they really swing the bat well. We didn’t let our guard down. We came back, won the next two games and split the series, which is always good.”

The Hornets went on to win the final game of the series 6-1 to earn a split.

“The first two games were tough losses,” Christiansen said. “We lost 6-5 and lost 4-2 and certainly had chances to win both. And I was proud of our guys the way they came back after losing those first two to come back and win the last two to split the series.”

Adams got his first win of the season by pitching seven innings, allowing nine hits, one run and one walk with five strikeouts.

“That’s probably one of my better starts,” Adams said. “I was glad to be able to go far into the game and help out our bullpen because I know our bullpen has pitched a lot this weekend. It was big for me to go deep into the game.”

Christiansen said Sunday’s performance was one of the best he’s seen from Adams in his short career at Sac State.

“That’s one of the best outings he’s had in his time here,” Christiansen said. “I think he really grew up today. It wasn’t very sharp early and we challenged him to compete a little bit and he (was) the difference in the game giving (us) seven innings.”

Sophomore Jack Zalasky and Churby each came on in relief of Adams, tossing one scoreless inning each. Walstad was the offensive MVP for Sac State over the weekend. The senior infielder had five runs, five hits (two home runs), three RBIs and four walks in 12 at-bats.

“I was just sticking to my approach, you know, seeing the ball pretty well,” Walstad said. “Just trying to get good swings off and get on base, help this team win.”

Adams rated Walstad’s performance over the weekend as “10 out of 10.”

“That’s big, that’s what we needed,” Adams said. “I know some games we struggle (with) hitting. But him contributing that much helped a lot and it was a big key to our offense.”

The Hornets have one more home game remaining in their season-long 12-game homestand to begin the season. Sac State plays a single game at The John against the University of Pacific on Tuesday night at 5 p.m.