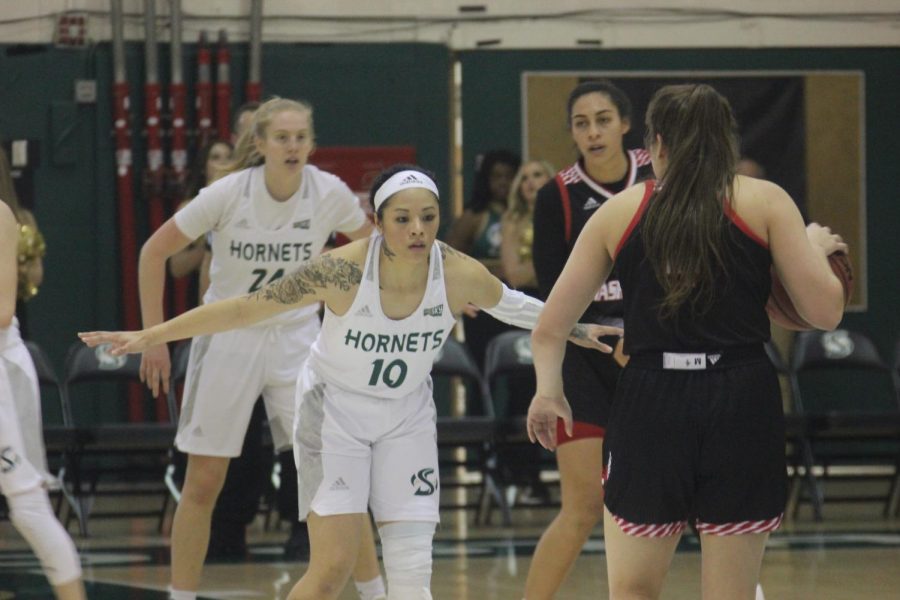 The Sacramento State women’s basketball team led by 19-points in the first half but ultimately collapsed in the fourth quarter leading to a 78-73 home loss to Eastern Washington University.

Eastern Washington earned redemption against Sac State from earlier in the season when the Hornets came back from a 19-point deficit to win in Cheney, Washington. The Hornets were once again without senior forward Kennedy Nicholas who has been out since Feb. 8 with a right-ankle injury.

“We had a pretty good first half and our shots were falling,” sophomore guard Tiana Johnson said. “Then in the second half, we just didn’t anticipate them coming back so quickly. We lightened up on defense. We knew they could shoot and we let them do it.”

However, the second quarter was not all positive for Sac State. Senior guard Gabi Bade exited the game with three minutes remaining in the first half with a right heel injury and did not return. The injury to Bade left the Hornets with only one active senior in guard Camariah King. Bade finished with six rebounds, five assists, four points and three steals in 13:42 of action.

“We have a tight squad, but it would have helped a lot to have Ken and Gabi for sure,” sophomore guard Summer Menke said after the game.

The Hornets and Eagles continued to battle in the third period. Eastern Washington outscored Sac State 16-13 in the quarter to trim the lead to 15 going into the final 10 minutes of action at 59-44.

Unfortunately for the Hornets, the fourth quarter was by far their worst period of the night. Sac State led by double-digits at 65-55 with seven minutes remaining in the game. The Eagles then went on a 17-2 run over six minutes to retake the lead.

Eastern Washington freshman point guard Jenna Dick nailed a 3-pointer with two minutes remaining to give the Eagles their first lead since the beginning of the second quarter at 69-67. Eastern Washington did not look back, outscoring the Hornets 34-14 in the period to ultimately win 78-73.

“We were on the other end of it at their place, almost an identical game,” coach Bunky Harkleroad said. “Our team’s a lot like theirs, they’re looking for any way to get a win just like everyone else. So it’s frustrating, but you can’t be surprised, not in the Big Sky.”

Sac State won the turnover battle at 17-10 but lost the game at the free-throw line. The Hornets struggled from the charity stripe, making 6 of 14 attempts Thursday night.

“I thought they played much more aggressively in the second half than they did the first half,” Harkleroad said. “I do think that we seemed a little flat when they made the run and I don’t know really why if it’s a physical or mental thing or a combination.”

Johnson continued to play well for Sac State with two game-highs, scoring 20 points on 10-of-18 from the field with nine rebounds. Menke added 13 points, seven rebounds and four assists in the loss.

The Eagles were led to the win by four starters scoring in double-digits. Sophomore center Bella Cravens fouled out in 20 minutes of action but was efficient when on the floor, scoring a team-high 17 points on a perfect 8-of-8 from the field with seven rebounds.

Dick and sophomore guard Grace Kirscher each contributed 16 points on five made field goals. Freshman wing Kennedy Dickie had 10 points and seven rebounds in the win.

“(This loss) is definitely on us,” Johnson said. “We needed to come out harder. We came back and beat them at their house and that’s what they did tonight (to) us.”

Sac State plays the University of Idaho at the Nest on Saturday afternoon at 2:05 p.m.