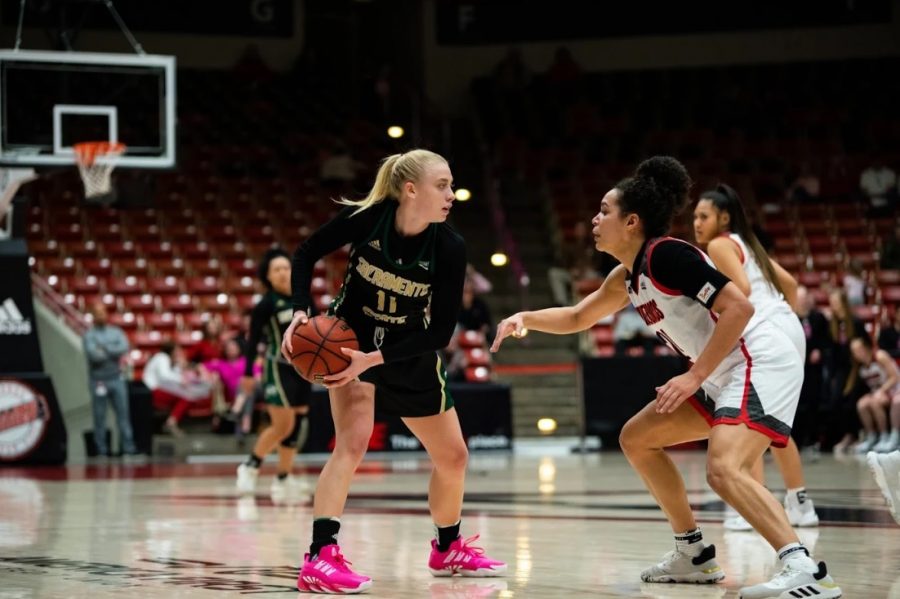 Sac State sophomore guard Summer Menke looks for an open teammate while being guarded by Southern Utah junior forward Jessica Chatman on Thursday, Feb. 13 at the America First Event Center. The Hornets defeated the Thunderbirds 71-62 on the road.

The Hornets (8-15, 6-8 Big Sky Conference) came into the game against the Thunderbirds (12-10, 6-7) with a disadvantage, missing arguably their best player. Senior forward Kennedy Nicholas did not travel with the team for the two-game road trip as she is currently nursing a right-ankle injury.

Sac State scored first as sophomore point guard Milee Enger made 1-of-2 free throws to begin the game. Southern Utah responded with a 6-0 run to take their first lead of the game.

The Thunderbirds held the lead for the entire quarter from that point on until Sac State sophomore forward Tiana Johnson nailed a 3-pointer with 37 seconds left in the first to retake the lead for the Hornets. Sac State led Southern Utah 17-16 after one period.

In the second half, the Hornets took over. After trading baskets to begin the third quarter, Sac State went on a 14-0 run over 4:20 to take a commanding 49-35 lead midway through the third quarter. The Hornets went on to outscore the Thunderbirds 21-11 in the third period to take a double-digit lead into the final quarter at 54-44.

Sac State and Southern Utah played a nearly even fourth quarter, as the Thunderbirds outscored the Hornets 18-17 in the period. However, it was not enough for a comeback as Sac State went on to win 71-62.

With the victory, the Hornets have now defeated the Thunderbirds in 11 consecutive contests dating back to 2014. Additionally, Sac State handed Southern Utah its second home loss of the season.

The Hornets had two keys to victory Thursday night, fastbreak and bench points. Sac State outscored Southern Utah 9-0 on fastbreak opportunities and 22-9 in bench points. The Hornets also shot the ball well from the field, making 28-of-61 attempts (45.9%) on the night compared to the Thunderbirds who converted 32.8% of their shots.

Sac State was led to the win by Johnson, who stepped up big for the Hornets without Nicholas. The sophomore forward had a double-double with a career-high 26 points on 12-of-20 from the field, a career-high 14 rebounds (five offensive) and two blocks.

Southern Utah had a trio of players score in double-digits as well. Junior forward Jessica Chatman had her first double-double of the season with 14 points and 10 rebounds. Freshman guard Madelyn Eaton scored a team-high 16 points with eight rebounds. Finally, senior guard Rebecca Cardenas contributed 11 points on 5-of-12 from the field in the loss.

The Hornets, who have now gone 6-4 after beginning the season 2-11, will conclude their road trip on Saturday afternoon at the University of Northern Colorado. Tipoff at the Bank of Colorado Arena is set for 12:05 p.m.