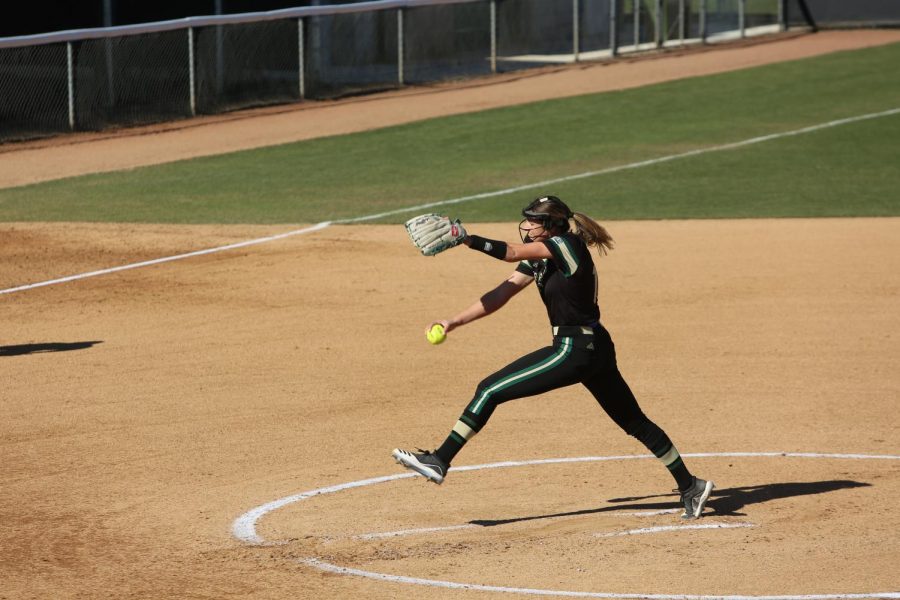 The Sacramento State softball team had their first road trip of the season when they traveled to Lake Elsinore, California for the Golden State Classic Tournament.

“The field was a huge factor and it was our first road trip. We need to find our own rhythm,” said sophomore middle infielder Kailie Hargis. “We came back hard (Sunday) and made sure we grinded through this last game and came out with another win under our belt to head home.”

The team began the tournament facing Loyola Marymount on Friday.

Junior infielder Mo Spieth opened the top of the second with her first home run of the season to give the Hornets an early 1-0 lead. However, the Lions dominated the bottom of the third by scoring five runs to quickly take back the lead.

Spieth responded again with a two-run homer to bring Sac State within two in the top of the fourth, but Loyola Marymount’s lead was already enough. Despite the team’s effort, Loyola Marymount scored one more run to defeat the Hornets 6-4.

“The team never stopped fighting like we saw last week, whether we were up or down,” coach Lori Perez said. “We need to minimize our errors, especially in those key moments.”

The Hornets won their first game of the three-day tournament and second game of the day in mercy rule fashion over Seton Hall in five innings. Against the Pirates, the Hornets combined for 13 RBIs, including five from freshman third baseman Lewa Day.

The Hornets’ bats were on fire as they took a substantial 9-2 lead after a three-run homer from sophomore first baseman Alondra Mejia in the fourth.

“It was extremely exciting for the girls to have that moment this early in the season and in college,” Spieth said. “It was amazing for them and for them to step up and to see the hard work pay off.”

On Saturday, the Hornets began the day taking on Bradley and lost 6-3.

Trailing by six in the seventh inning, Sac State scored three runs and had the tying run at the plate. However, the comeback proved too late as Bradley’s reliever shut it down with a strikeout to win the game. The Hornets ended the game with only five hits, three of those coming in the final inning.

Sac State faced Hawaii for their final game of the day. Day opened the first inning with her second homer of the weekend. Both teams scored one run in the second inning, leading to a 2-1 Hornets lead after the bottom of the second inning.

The Rainbow Wahine tied the game by hitting a home run in the sixth inning.

Hawaii scored four times in the top of the seventh to take the lead. Hargis hit her first home run of her collegiate career to cut Sac State’s deficit to 6-4. The Hornets ended the seventh inning by scoring two more times to bring the score within one, but it was not enough to win the game.

A dramatic ending of the tournament came against Army on Sunday morning. Both teams were scoreless until the fifth inning. The Hornets opened the scoreboard with one run, but Army responded by advancing ahead by three in the top of the sixth inning.

Sac State rebounded and tied the game at three runs a piece in the bottom of the sixth. After seven, both teams were locked at three, leading to extra innings. A two-out RBI-single from freshman outfielder Haley Hanson gave the Hornets the 4-3 victory in the ninth inning.

The Hornets finished the tournament with three defeats and two wins. Sac State will travel again for the LMU Tournament in Los Angeles. The first pitch against Loyola Marymount University is set for 8 a.m. Friday.