Hornets remain winless for the season 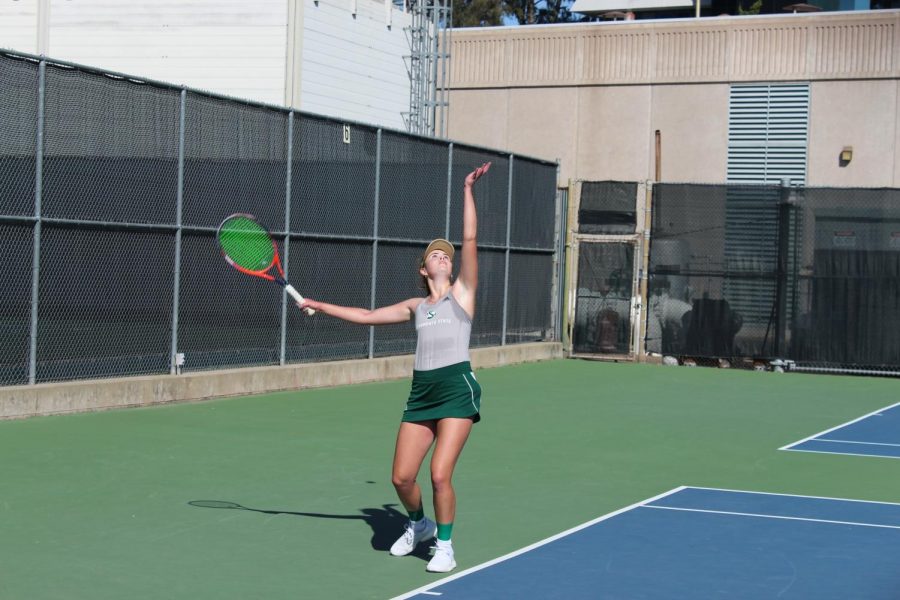 Sac State freshman Paige Alter prepares to serve in her singles match against Pacific on Sunday, Feb. 23 at the Sacramento State courts. The Hornets fell to the Tigers 6-1.

The Sacramento State women’s tennis team suffered its seventh consecutive loss Sunday against the University of the Pacific in a final score of 6-1.

The Hornets (0-7) were unable to secure their first win of the season against the Tigers (4-1) after a 2-1 doubles loss put them at an early 0-1 deficit that they couldn’t come back from.

Freshman Grace Dodd and junior Jenna Dorian lost their No. 3 doubles in a close 6-3 match. Freshman Paige Alter and sophomore  Megan Tagaloa also lost their No.1 doubles set with a score of 7-5.

Senior Ege Tomey and freshman Tsveti Yotova were the only doubles to win their match with a score of 6-3.

Dodd said she believed her doubles match could’ve ended a lot differently if she and her teammate would have made adjustments during the set.

“It was definitely closer then the score reflected,” Dodd said. “I think it could’ve been a flip of a coin, we just needed to make a few more serves then them, me especially.”

The outcome of the singles matchups didn’t turn out to be that much better than the results of the doubles performance for the Hornets. Sac State only won one out of the six singles matches.

Senior Ege Tomey tyring to put the Hornets on the board with their first point of the day in her singles matchup. @SH_Sports pic.twitter.com/IsxeF1ltcR

Sophomore Jayden Nielsen was the only one to win her singles match up  with straight sets in a score of 6-2 and 6-4.

Dodd said that the team is playing extremely hard, but the team and herself especially, need to maintain their confidence against stiffer competition.

“I think we’re playing really tough teams,” Dodd said. “I just think we need to have more confidence and believe what coach is saying when she says that we win no matter who we’re up against.”

The Hornets next match will be at home against the University of Nevada, Reno on Friday where they will look to end their 7-game losing streak and claim their first win of the season. The match is set to begin at 1 p.m.