New episodes of ‘Mic’d Up Students’ drop every Monday 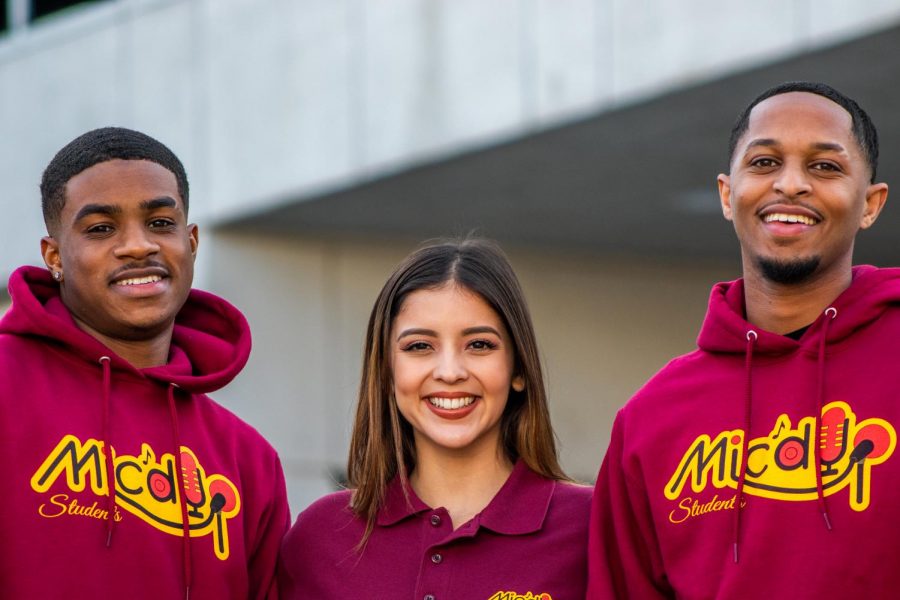 Malachi Powell, Ayra Nuñez and Nahom Semere host the “Mic’d Up Students” podcast. The group is recording its second season this semester while the first season is being posted every Monday.

“Mic’d Up Students” is a student produced podcast that launched this semester from Sacramento State’s Division of Student Affairs.

So far episode topics have ranged from dorm life at Sac State to a friendly debate about the messages contained in the film “Black Panther.”

Semere and Powell met in a First-Year Seminar class their freshman year with Ed Mills, Vice President of Student Affairs.

“That class basically was just me and Malachi arguing with each other back and forth,” Semere said. “When Ed Mills would try to interact with the class, he interacted with us.”

“We helped get the class engaged,” Powell said.

After reaching out to Mills in search of on-campus jobs, Semere and Powell were given the opportunity to start their own podcast.

“We sent him our resume and cover letter and he replied to our email with a whole new position, giving us a chance to express ourselves not only to the students but also to the faculty,” Semere said. “That was the beginning of the podcast.”

Powell and Semere said that the goal of the podcast is to give Sac State students a voice and offer entertainment while also shedding light on issues students face.

“On campus we’re always looking for new platforms and outlets to better reach the student body,” Semere said. “Everybody gets a mass email everyday from different departments and most people aren’t even opening those, so this is a way to provide entertainment but also get the message across.”

Powell said he is focused on the importance of not only bringing awareness to issues but using their platform to encourage action.

“If there’s a situation that requires change and we have the voice to spark that change then why not?” Powell said.

Powell and Semere both said that as Black students there is a lot of power that comes with their platform and that they hope to become role models for other Black students on campus.

“I think people, I don’t want to say they get shocked, but they’re proud of us,” Powell said. “It’s nice to see two young African-Americans speaking about things that actually matter.”

Ayra Nuñez, a third-year communications major, is a new member of “Mic’d up Students”. She was not on the first season due to the episodes being recorded last semester.

Nuñez will be a regular on the podcasts’ second season which is being recorded this semester as the first season airs.

Nuñez said that as a Latinx person she intends to bring more diversity to the group and offer a woman’s perspective to the show.

“I want to make sure we’re welcoming students and it’s not just a one-minded group of people speaking about mumbo jumbo,” Nuñez said.

Luis Kischmischian, head of marketing for Student Affairs, oversees the podcast and makes sure that the hosts of “Mic’d Up Students” are informed and prepared for each topic they choose to cover.

“I wanted to do it the right way, meaning that I didn’t want to just start a podcast, it took planning, I wanted to educate them about the production side,” Kischmischian said. “How to get subjects and do your research, really being intellectual with your conversation and not just being kids with a mic.”

The hosts believe that their personality and chemistry are the driving forces of the show.

“Our personality bleeds through the podcast and it comes off real easily so I feel like we’re able to tackle serious subjects and make it not so much of a bore in your ear,” Semere said.

They wanted to emphasize that the podcast was for the students first and foremost and that they hope to come off as approachable.

“We want to make it feel as if people can relate to us and make them feel as if they’re our friend just as much as we’re friends with each other,” Powell said.