Hornets win 3 out of 5 games 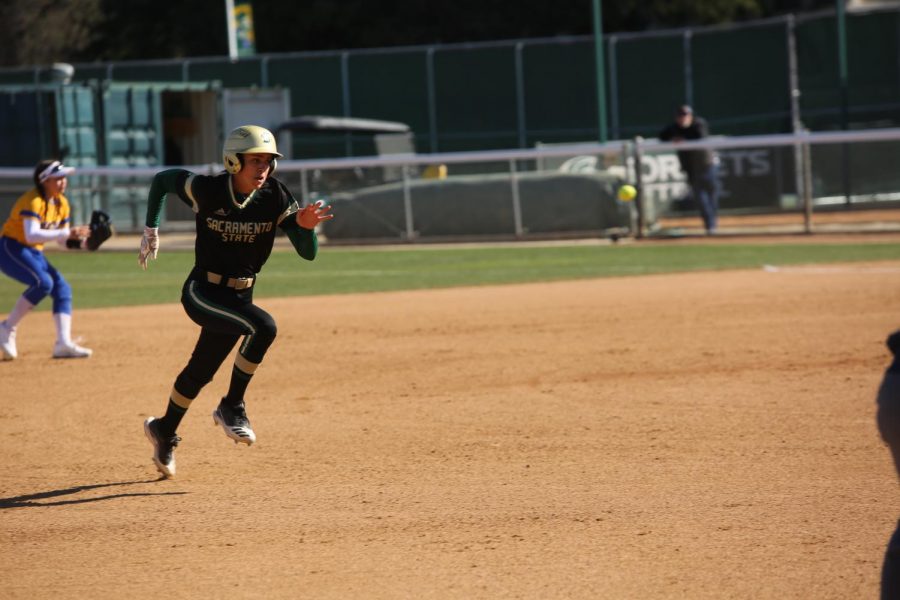 Sac State junior outfielder Charizma Guzman runs to third base against UC Santa Barbara at Shea Stadium on Sunday, Feb. 9. The Hornets took home three victories during the LMU tournament over the weekend.

The second road trip of the season took the Sacramento State softball team to Los Angeles to compete in the LMU tournament.

For the pair of games on Friday, Loyola Marymount University (8-6) and the University of Delaware (11-2) defeated Sac State (9-6). The Hornets defeated Quinnipiac University and Delaware on Saturday. On Sunday, Sac State beat Quinnipiac once again (8-0), ending the LMU tournament with three wins and two losses.

The Hornets began the three-day tournament bright and early as they took on host team Loyola Marymount for the second time this season. Last weekend, these two teams faced each other and Loyola Marymount took a 6-4 victory during the Golden State Classic tournament.

Sac State got on the scoreboard first in the second inning. An RBI double from sophomore middle infielder Kailie Hargis scored junior infielder Mo Spieth. Before the end of the inning, senior catcher Jessica Scott cracked an RBI single to plate Hargis and give the Hornets a 2-0 lead.

The team held the 2-0 lead until the sixth inning. However, a single followed by a home run from Loyola Marymount before the end of the sixth inning tied the game at two apiece.

Sac State was blanked in the top of the seventh, giving Loyola Marymount a chance for victory in the bottom of the inning. The Wolves took over the lead with one run for the 3-2 walk-off victory.

“It is nice to get on the board first, but it doesn’t guarantee you a win and we’ve been scoring first a lot in our games,” coach Lori Perez said. “But, you still have to play the game.”

Freshman pitcher Marissa Bertuccio, who started in the circle against Loyola Marymount, pitched for five innings and allowed just five hits and two runs with a pair of strikeouts. Senior pitcher Danielle Sperry got the loss in the relief allowing three hits in 1.1 innings.

Bertuccio knew the expectations for these games was to allow less hits and focused on it this weekend.

“We talked about what the team needed to do and we know what it takes to run a ball game and we had to apply that,” Bertuccio said. “We had a lot of energy to win the games.”

The second game on Friday was another loss to Delaware. The Blue Hens scored twice in the first inning.

In the third inning, a double from sophomore infielder Shea Graves scored junior outfielder Charizma Guzman to cut the deficit in half, but it wasn’t enough for the Hornets to win. The Hornets dropped their second game of the day 2-1. For this game, the defense allowed seven hits and two runs.

The next pair of games for Sac State was Saturday against Quinnipiac where the Hornets earned their first victory of the tournament.

The Hornets came alive in the third inning as Sac State took a comfortable 7-1 lead highlighted by a three-run triple from junior infield Katie Vretzos.

By the fourth inning, the Bobcats scored twice with a home run. Sophomore first baseman Alondra Mejia crushed her second home run of the season during the bottom of the fourth to extend the Hornets lead to 10-3. Quinnipiac scored on a wild pitch in the top of the sixth, but Sac State’s lead proved too much. The Hornets defeated the Bobcats 10-4.

“This year, I am more confident and have more experience, because last year was my first year hitting,” Mejia said. “I am trying not to think as much and going out there and having fun. I am trying to hit the ball hard and if it’s a home run, it’s a plus.”

Sac State and Delaware faced off again in the LMU tournament for the second game of the day.

By the fourth inning, Delaware scored to bring the score within one. However, Sac State quickly responded with six runs of their own, featuring a grand slam from Mejia.

Delaware began the fifth inning by scoring one run again to bring the score to 8-2.

However, Sac State responded in the bottom of the sixth by scoring two. The Hornets defeated Delaware in six innings at 10-2 in mercy rule fashion, handing the Blue Hens their second loss of the season.

The Hornets offense was on fire, combining for 25 hits and 20 runs by the end of the day. Mejia led the team finishing the day 4-for-8 with three runs, two doubles, a pair of home runs and eight RBIs.

The team won 8-0 once again Sunday morning against Quinnipiac.

Sac State opened the game with three runs in the first inning. Another three came along in the second inning. A two-run shot from freshman infielder Rylee Gresham capped the Hornets 8-0 mercy rule victory. The home run was Gresham’s first collegiate hit.

The Hornets defeated the Bobcats for the second time in the same tournament.

Hanson also tied the Div. I era record for most steals in a game with three during the victory over Quinnipiac. Hanson already has nine steals in just 15 games.

The Hornets face rivals the University of California, Davis on Wednesday at home for their next game.

Perez said she expects the game to be evenly matched with good pitching, good defense and scoring many runs, as both teams come into the contest with momentum.

First pitch against the Aggies is set for 2:30 p.m. at Shea Stadium.