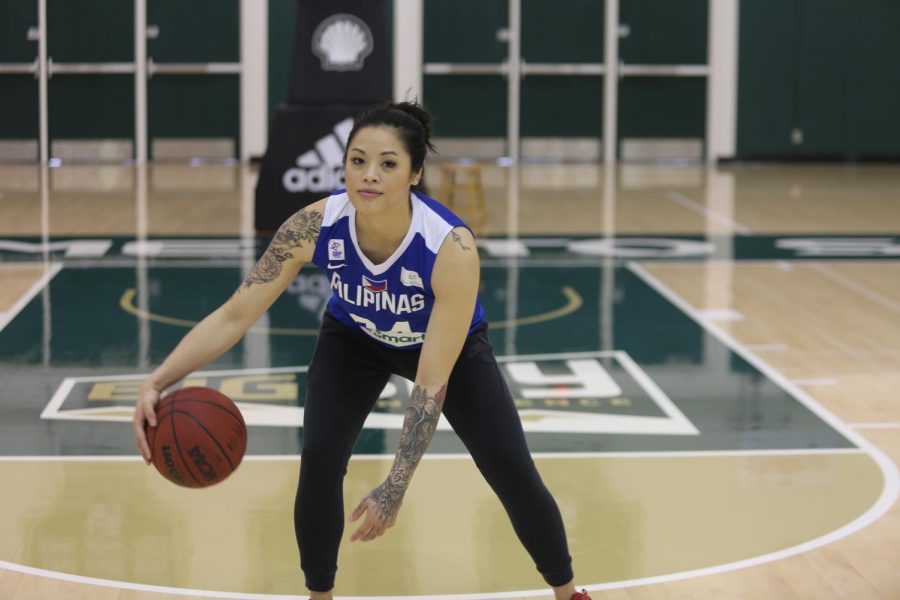 Sac State senior guard Gabi Bade crosses over while wearing her Philippines national team jersey on Monday, Jan. 26 at the Nest. Bade is one of three seniors on the Hornets' young roster.

At a young age, Sacramento State senior guard Gabi Bade struggled to walk, often stumbling and falling down as she tried to keep her balance.

Because of these early struggles, her father Chris Bade, never thought she would follow in his footsteps and become a basketball player. However, it was Bade’s determination and work ethic that helped her surprise the doubters.

“She was short, weak, she always fell on her knees and (was) unbalanced,” Chris Bade said about his daughter’s early years. “I felt so sorry for her at that time. I never thought she could be an athlete and never in my wildest dreams that she could play Division I basketball. Her competitiveness, heart and desire to get better, those things you can’t teach in basketball or any sport.”

Now at 23-years-old in her senior year of college, Bade is a starter on the Sac State women’s basketball team and spent the summer overseas, following in her dad’s footsteps playing for the Philippines’ national team.

Bade grew up in Milpitas, California, about ten miles away from San Jose and two hours from Sacramento. She started playing basketball at the age of 6, learning from her dad Chris, who played professional and semi-pro basketball overseas from 1989-2001.

As a high school senior, Bade only had a handful of scholarship offers, which led her to move across the country to play at the University of Buffalo in New York.

“I didn’t get many offers during my senior year,” Bade said. “I came to Buffalo because they wanted me.”

Bade spent two seasons at Buffalo before transferring to Sac State. In her freshman year, the Buffalos won the MAC Conference tournament and advanced to the NCAA tournament to play The Ohio State University from the Big Ten Conference. Experiencing the tournament later gave Bade insight to help the Hornets when they played the Buckeyes at the Nest this season.

“We played against Ohio State in the first round, there were like 10,000 people,” Bade said. “I’ve never played in front of 10,000 people and it kind of overwhelmed me. It was an amazing experience, even though we didn’t beat them. Ohio State at that time was ranked in the top 10 nationally, so being able to play against them was amazing.”

Bade’s decision to leave Buffalo was not prompted by basketball, but family. Her grandmother had gotten sick and Bade wanted to be close by. Bade emailed several California schools, including Sac State.

Coach Bunky Harkleroad invited Bade for a visit, but forewarned her that she may have to play without a scholarship as none were available at the time. However, a week after her official visit, Bade was offered a scholarship to play at Sac State.

“Gabi’s got a great smile,” Harkleroad said. “She’s a gym rat. She loves to get better (and) be in the gym.”

After transferring, Bade was redshirted during the 2017-18 season. The season spent on the bench allowed Bade to observe and learn the systems that Sac State runs.

“I got a really good perspective of what the game was like, what our system was like, and it really replicated high school because it was the same when I played in high school, drive and kick,” Bade said.

Despite being new to the team, Bade took on a leadership role before taking the court for the Hornets, including getting new players ready for the intensity of college basketball during the summer.

“Gabi was really intimidating when I first met her,” sophomore guard Summer Menke said. “I remember when I was a freshman, one of our first practices, she was guarding me on defense and she was telling me that I have to earn it and then she really scared me. But now she’s one of the closest teammates I have and she’s really inspiring.”

However, Bade’s experience at Sac State has been anything but easy due to injuries. Before making her Hornet debut as a junior in 2018, she tore her meniscus in her left knee, the same knee that she tore her ACL in during eighth grade. The injury caused Bade to miss the first eight weeks of the season before making her debut. As a junior, Bade averaged 10.4 points, 3 rebounds and 2.2 assists per game.

In between her two seasons at Sac State, Bade spent the summer of 2019 following in her dad’s footsteps, playing for the Philippines national team.

“It was just an amazing experience,” Bade said. “When I got there, we practiced for about three weeks before going to the tournament, which was in Taiwan. We played teams like China, Chinese Taipei, New Zealand, Korea (and) Japan. It was my first time playing against an international team and I would say they’re really freaking good. They’re so fast and they moved the ball so well.

“We didn’t win many games, but it’s just the experience. Traveling around my motherland was amazing because I haven’t been there for 18 years. I would say it was just a phenomenal experience because it was a once in a lifetime opportunity.”

When prompted with the idea of playing internationally, Gabi’s dad Chris encouraged her to play.

“Everyone loves to play basketball, but not everyone has a chance to represent the Philippines,” Chris Bade said. “Anyone can play college, but not everyone can have a chance to play for their national team. But I told her, if you have a chance, you know why not, and it’s a good experience for her. It taught her a lot playing internationally against a lot of good players.”

Bade returned to the states for her senior season and initially went on a tear, averaging 16.6 points, 7 rebounds, 3.6 assists and 2.1 steals per game through the first eight contests. However, Bade was once again taken out as she had nagging injuries to her lower back and right heel that sidelined her for three games.

“I’m gradually progressing, taking baby steps every day,” Bade said. “I don’t know why I’m prone to injuries, but I’m trying to push through just because it’s my senior season. I had that mentality before coming into my senior year that I’m going to finish strong no matter what it takes.”

Since returning from injury, Bade has been a much-needed boost for Sac State. The Hornets began the season 3-12 but have since won three of their last five games with Bade back in the lineup.

“What I can do with this team is to create positivity and (do) my job,” Bade said. “Listening to my coaches, I’m listening to every detail, doing the small things, just working my butt off in practice and getting after it. Trying to have faith and hope that we can win more games. Our goal, everyone’s goal, is to win and to win the Big Sky tournament.”